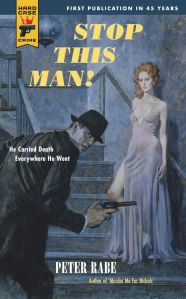 This is the first publication of Stop This Man! since 1955, and it comes to us from Hard Case Crime, a US publisher committed to resurrecting pulp titles from the 40s and 50s. On this showing they are doing a good job of unearthing forgotten classics.

The first thing to note is the cover art by Robert McGinnis, a fantastic faux-pulp image of a gunman threatening a redhead in her negligée. Great strapline too: ‘He Carried Death Everywhere He Went’.

The book opens seedily, with a sick old lady fainting on the porch of a cheap rooming house. It soon transpires that she is suffering from radiation sickness. This is the story of Tony Catell, a three-time loser, who we meet on the run carrying a suitcase containing a 36lb ingot of stolen – and dangerously radioactive – gold.

But Catell’s had enough, this is his last chance at the big time, and he’s not going to let a thing like radiation get in his way. ‘If it’s rotten or it’s hot, that stuff won’t stop me, because I’m not stopping. Get that. Nothing’s going to stop me.’

‘Some men have a way of concentrating disaster around themselves.’ So says the LA syndicate boss Smith about Catell. We follow our anti-hero from Hamilton City to Detroit, Arizona, LA and Santa Monica as he does just that. The plot rattles along pacily, with only a few moments of implausibility – Catell’s resistance to radiation, and the strange allure of a 50-year-old has-bean crook to a beautiful 18-year-old nightclub singer – to undermine it. And there are some great set pieces – a bullying sheriff looking for a fight in a small-town lock-up, a daring raid disguised as a TV deliveryman, right under the FBI’s noses, and a nail-biting burglary in LA.

Peter Rabe was a prolific crime novelist, producing 30 books under various names including the glorious Marco Malaponte and J. T. MacCargo. Sadly, Hard Case only publish Stop This Man!, but other publishers have released more.

Donald E. Westlake apparently said “Peter Rabe wrote the best books with the worst titles of anybody I can think of.” Some of Rabe’s other titles? Murder Me for Nickels, Benny Muscles In, and Kill the Boss Good-by. Case closed.

Final destination: Back to the library.

Past Offences exists to review classic crime and mystery books, with ‘classic’ meaning books originally published before 1987.
View all posts by pastoffences →
This entry was posted in Witness Statements and tagged 1950s, Hard Case Crime, hard-boiled, Peter Rabe, US. Bookmark the permalink.