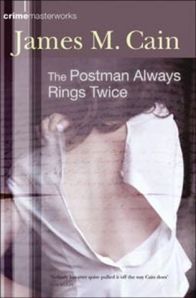 This is a short book with a very simple story. Frank and Cora, limited by poverty and education, and driven by lust and greed, work together to kill Cora’s husband Nick – with questionable success.

In the Hatchard’s Crime Companion, the CWA reviewer talks about ‘a sexual explicitness that caused offence at the time it appeared, although it seems fairly ordinary today’.

I think that gets it slightly wrong. On one hand, the sexual content is tame (although I am writing this during a trip to Riyadh so perhaps I’m being a bit Eurocentric). However, the sheer force of Cain’s description is still overpowering. Both Frank and Cora like mixing violence in with their sex, but I think their self-loathing is what really tips the balance.

Given the amorality of the characters (and I do read them as amoral rather than immoral), the ending is surprisingly restitutive, with everyone getting their just desserts.

Ultimately, Postman deserves your time as a reader. Not necessarily for the characters or the plot, but for the power of Cain’s prose.

Final destination: Back to the library

Update: Mysterious Press tell the story of the movie version in their 101 Greatest Movies of Mystery and Suspense.

Update: Another review of Postman at Crime Fiction Lover.

Past Offences exists to review classic crime and mystery books, with ‘classic’ meaning books originally published before 1987.
View all posts by pastoffences →
This entry was posted in Witness Statements and tagged 1930s, James M Cain, Orion Books, US. Bookmark the permalink.