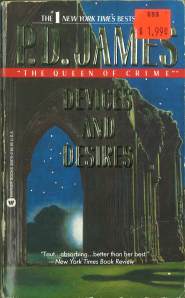 This is a souvenir of my recent trip to San Diego. I’d given up finding a second-hand bookstore (not shop – I went native), until I wandered into the actually-not -unpleasant Horton Plaza and found a pop-up shop called Crown Books at the top. There, behind all the shiny new books, was a great little second-hand section. You could say California is a long way to go to buy a P. D. James book, but I was delighted to find something from the CWA list of 100 best crime novels.

James’ series character Adam Dalgliesh has inherited a converted windmill in Larksoken, a remote Norfolk peninsula described as being between Cromer and Great Yarmouth. A huge nuclear power station, presumably modeled on the real-life Sizewell B, dominates the peninsula. The station also dominates the lives of the novel’s characters. The arrogant Alex Mair is Director, living in a nearby cottage with his cookery-writer sister Alice. Other staff members include Miles Lessingham, Mair’s PA Caroline Amphlett, and Hilary Robarts, the Acting Administrator. Living nearby are the Blaneys, a chaotic family still reeling from the loss of the mother; Meg Dennison, a teacher who has been hounded out of the profession by a race scandal; and anti-nuclear campaigner Neil Pascoe and his caravan-mate Amy. All of the characters are strongly and sympathetically described, but Hilary Robarts is the key figure in the first part of the book. She has antagonised both local residents and station staff in a series of arguments and legal wrangles in a way which so clearly signposts her as a victim that I don’t think it is a spoiler to share this with you.

There is another force at play on the peninsular – the Whistler, a serial killer** who has been preying on women in the area and who has so far stumped the local police led by Inspector Terry Rickards. There are parallels drawn in the text between the power station and the Whistler:

‘‘I can imagine him out there in the darkness, watching and waiting. It’s that sense of the unseen unknowable menace which is so disquieting. It’s rather like the feeling I get from the power station, that there’s a dangerous unpredictable power out on the headland which I can’t control or even begin to understand.’

The investigation that dominate the mid-section of the book are carried out by Rickards and his Sergeant, Oliphant. For my money, Rickards is a better character than Dalgleish. He is insecure in his ostensibly happy personal life, nervous about a child on the way, envious of Dalgliesh and pre-emptively envious of the ambitious Oliphant.

The plot plays out very slowly, accelerating suddenly towards the end and taking an unexpected left-turn in the final section. Until that point there isn’t much story per word, so it is a testament to James’ ability as a writer that this is still an enjoyable read.

‘In contrast to his sisters, Anthony was overclad, a bundle of leggings, jumper and a padded jacket topped with a woollen helmet with the bobble pulled well down over his forehead, beneath which he surveyed their busyness, unsmiling, like a stout, imperious Caesar.’

Her series investigator Dalgliesh exactly reflects the calmness and detachment of James as a narrative voice. In a recent interview she was asked:

Q: Were you annoyed by the Guardian‘s description of Adam Dalgliesh as “lugubrious”?
A: Not annoyed, as that is obviously how they see him, but I would rather describe him as reticent.

He is certainly one of those fictional policeman that must have been born at a senior rank. You just can’t picture him breaking up a pub fight in Stepney or attending a domestic disturbance in Peckham. I don’t imagine they let him near the pepper spray.

If I have a criticism of her style, it is that the ‘Dalgliesh tone’ frequently infects the thoughts and speech of all of her characters. Take this, in a chapter centred on a teenage girl:

‘And beyond it, like a silken scarf, lay the wide untrammelled sea.’

Or this, out of the mouth of the intelligent but earthy Sergeant Oliphant.

‘”Better to grab a pair too large than too small, a soft shoe rather then unyielding leather.’

My main reservation regarding Devices and Desires is Dalgliesh. He doesn’t play an active role in the investigation. His musings are irrelevant to the plot and don’t contribute much to the themes of the novel either. His perspective on the community is largely irrelevant as James handles her other characters and their points of view so well. You could make a fairly strong case that he was simply parachuted into the plot at the last minute.

Final destination: Not a keeper for me, and not in good enough condition to resell, so: charity shop.

*If you’re not in the UK, John Lewis is one of our more upmarket department stores.

** Note the early use of this term.