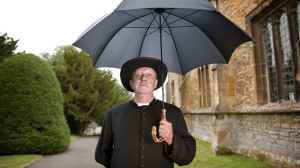 As a long-time fan of the Father Brown stories by G. K. Chesterton, I have been eagerly anticipating the BBC’s adaptation. I’ve set up this page as an index of the show’s appearances on the Web.

The first five episodes are summarised on the BBC Media Centre:

The making of the show

The Radio Times previews the series with a brief interview with the new Father Brown, Mark Williams:

‘He has a huge appetite for the detail of life and for humanity, and he cares very much about people’s souls. That’s the most interesting thing about him as a sleuth: it’s not him solving a conundrum or a crossword, he’s dealing with what he sees as people’s eternal damnation. And when he works it out, the sky turns black and is full of harpies; he’s desperately committed to his morality.’

Back in October I interviewed the BBC’s Producer Ceri Meyrick (@cerimeyrick) about the making of Father Brown.

The stories are set all over the world and in lots of different times – GK wrote them over a period of several decades, of course, but he died in 1936, so moving them to the 50s was a big change. We were advised that period shows work better if they are set within living memory, so that’s why we updated it. We wanted the TV show to be anchored in a time and a place – unlike the stories. My feeling was that the stories had a timeless feel to them anyway.

The show’s writer, Rachel Flowerday (@buskeroo), wrote for The Writer’s Guild about the creative process:

We spent a chilly December day driving around the Cotswolds, where we’d settled on setting Father Brown: the original stories have no precinct, with Father Brown popping up in Paris, on a boat, in a country house – great fun, but way too costly for daytime telly. We saw amazing houses, met a Reverend and toured the vicarage that became Father Brown’s presbytery, and over a pie-and-mash lunch in a local pub, locked down the gang of characters, era and Gloucestershire village setting of our interpretation of Father Brown.

‘I’ve been a character actor for 25 years and nobody’s ever cast me for my sexual attraction… So it’s not something I worry about’ – Mark Williams interviewed in the Radio Times.

Rachel also blogs with another writer, Tahsin Guner about working together:

First, as is apt, a confession: before working on Father Brown, I’d never read a single word of GK Chesterton. Or written a murder-mystery. Or a period piece. Or developed a new TV series. I’d written numerous episodes of Holby City, as well as Casualty, Eastenders, and Doctors, but this was new territory. I was well outside my comfort zone – but I think that’s a good place for a writer to be.

If you’re interested in the soundtrack, the show’s composer Debbie Wiseman (@wisemandebbie) can be heard on BBC Radio 4 talking about her approach.

And finally, the scripts for The Hammer of God and The Flying Stars are available from the BBC Writer’s Room.

Mark Lawson in the Guardian draws a parallel between Father Brown and Blandings, also launching this week on the BBC.

Although showing on consecutive days and not billed as part of a themed sequence, BBC1 next week launches two new shows offering a broadcasting equivalent of what art curators like to call a “conversation” between pictures hanging on opposite walls.

Apparently both are attempts to revive a style of drama that has fallen out of fashion – ‘warm, innocent, literary translation’.

Working out who the culprit is should not have viewers straining their analytical faculties to breaking point, despite the killing itself being a tad implausible. The formula is simple – whoever looks shifty is not the killer; the person who is not shifty is the killer.