Masters of the “Humdrum” – an interview with Curtis Evans 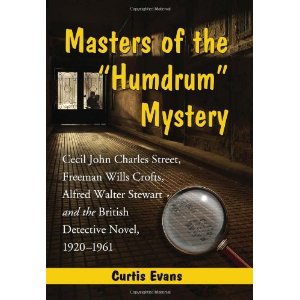 Visitors familiar with my monthly classic crime round-ups will know that I frequently mention Curtis Evans at The Passing Tramp. Curt has a great blog, but his thoughts on Golden Age mystery fiction are also available in print: his Masters of the ‘Humdrum’ Mystery came out in  June last year. Read my review here.

I spoke with (well, emailed) Curt about his work and his long-time fascination with the less-publicised writers of the British ‘Golden Age’…

What inspired you to write Masters of the ‘Humdrum’ Mystery?

Too often books that purport to be about the entire crime and mystery genre end up devoting most of their space to books published since 1990, about the time of your cutoff date! The 1920s barely exist, aside from a few books about Hercule Poirot and Lord Peter Wimsey that may get included (The Murder of Roger Ackroyd, certainly). I wonder whether people think British crime writing in the first decade of this century could be adequately represented by, say, two authors? Who would they be, Ian Rankin and Val McDermid? Should we forget about everyone else?

In Masters I wanted to begin a personal project of recovering the lost world of Golden Age British mystery fiction. If people really want to fully appreciate the history of their favorite fiction genre, they need to start looking at more authors. This applies as well, by the way, to the United States, though Masters deals with Britain.

So what brought you to the Golden Age?

Over twenty years ago when I was visiting a friend in Chicago I went to a basement bookstore there and wandering around the aisles I came across a great mystery section. I ended up buying three IPL paperback editions of John Dickson Carr mysteries: Hag’s Nook, the Judas Window and The Burning Court. They all I believe had introductions by Doug Greene, Carr’s biographer-to-be.

My friend was living in an old Chicago brownstone–great place, though he was sharing the apartment with four people–and I can recall sitting on this stone balcony on at dusk reading The Burning Court, one of Carr’s creepiest books. It’s the one involving murder and possible witchcraft in Pennsylvania.

Up till then I had only ever heard of the Crime Queens among English mystery writers: Christie, Sayers, Allingham, Marsh. I had started reading Christie back even before she died, when I was all of eight years old if you can believe it – I don’t say I solved any of the murders! – and I had read probably two-thirds of the Christies by the time I finished high school. I quit reading mysteries in college, however, until I came across Carr, then I got sucked in again. After I read all the Carrs I could track down, I started looking for other writers. By this time I was in graduate school and I started using reference books like A Catalogue of Crime, by Wendell Hertig Taylor and the late, great Jacques Barzun. It was there I found out about the detective novelists Julian Symons called “Humdrum”–writers of considerably less flair than writers like Carr, to be sure, but nevertheless of great interest to me for their clever puzzles and period English flavor.

When I started looking into the subject more I found a lot of condescending stuff being written about the Humdrums specifically and puzzle-oriented mysteries in particular. I think even back then, twenty years ago, the seed was painted in my brain to address this subject in a book someday. But by then I was working on a dissertation in the history of the southern United States, so any such mystery project had to be set aside. I did write Doug Greene a fan letter though!

In your book you focus on three writers: Cecil John Charles Street, Freeman Wills Crofts, and Alfred Walter Stewart. Are they ‘the best of the rest’, or do you think they were as good as the more famous names?

I wanted to focus on these three writers I think they are enjoyable genre writers but also because they epitomize the puzzle tradition of the classical British detective novel in its purest form.

Of course for a great many today, Golden Age British mystery fiction – that produced between the two world wars – is almost exclusively represented by four or five ‘Crime Queens’. They’re like the vowels: a, e, i, o, u–and sometimes y. With the Crime Queens we have Christie, Sayers, Allingham, Marsh–and sometimes Tey.

The late Jacques Barzun argued Georgette Heyer should be included as well, but that has never quite taken, though Heyer’s detective novels remain in print.

Then there’s Gladys Mitchell too, though she seems to be too eccentric for mass popularity.

Then sometimes we get the group I think of as the Detection Dons: Michael Innes, Nicholas Blake and Edmund Crispin (though Crispin was really post-Golden Age if we interpret the term strictly). Lots of literary allusions, quotations and wit.

Cyril Hare and Anthony Berkeley Cox (Francis Iles) sometimes get mentioned too among the ‘literary’ men.

And of course the American John Dickson Carr, who lived in England for many years and set most of his detective novels there, still has his followers among the fans of the locked-room mystery.

All these writers are better known today than John Street, Freeman Wills Crofts and Alfred Walter Stewart, who, along with some other writers, were over forty years ago dubbed ‘Humdrums’ by crime writer and critic Julian Symons in his mystery genre study Bloody Murder. This was not meant as a compliment!

To Symons, these writers emphasized puzzle and plot mechanics at the expense of literary style, making their books unpalatable reads. Since Symons critics have tended to follow his lead on this matter. 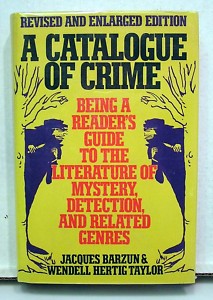 The great exception is Jacques Barzun’s and Wendell Hertig Taylor’s A Catalogue of Crime, which lavished with praise these three authors, especially Street. Barzun and Taylor were great advocates of the detective novel actually having detection, or ratiocination. They admired Street, Crofts and Stewart as clever plotters and functional stylists.

Nowadays, of course, seemingly about everyone in the mystery field wants to be considered ‘literary’. The highest compliment many critics think they can pay a mystery – oh, excuse me, crime – novel is to say that it ‘transcends the genre’.

In the modern atmosphere the Humdrums have become the designated scapegoats for the Golden Age’s perceived sin of having overemphasized the puzzle element in mysteries. Even Christie, despite her still great sales and popularity, has been mocked as merely a maker of puzzles. I get into all this in the Masters of the ‘Humdrum’ Mystery introduction, which is called ‘Mere Puzzles’.

Essentially I argue that we have written these writers – who actually were quite highly regarded in the Golden Age – out of the period, putting almost all the emphasis on the Crime Queens. It’s ahistorical, but also, I think, an injustice to these writers, Street, Crofts and Connington. T. S. Eliot, for example, read both Crofts and Connington in the 1920s and highly praised books by both men. Yet we only ever hear how he, like Dorothy L. Sayers, liked Wilkie Collins.

In Masters I set to redress the balance.

Did you visit the UK or was everything researched remotely?

No, to this day I have never been to England, which is kind of odd, considering how much I have read and written about it. Though actually my history Ph.D. is American history. Still, I have always loved English history. Once upon a time I was able to name all the English kings going back to William the Conqueror and I knew all the players in the Wars of the Roses.

This book is a product of the internet, which allowed me to make connections and marshal information in a way that would have been impossible in the 1990s. I did make trips to American universities to see some pertain university papers collections that aren’t accessible via the internet.

How exactly does one go about making contact with an author’s estate/relatives? Is there a lot of real-life detective work involved?

With Crofts I never found anyone who actually knew him, which was a disappointment. I did plunk down some cash to get some Crofts’ personal correspondence that came up for sale.

Crofts never had any children, and Street’s daughter died in her twenties 81 years ago (as far as I know I was the first person to discover that Street even had a child). Stewart’s daughter, now in her nineties, was very helpful.

To be honest, these days it’s getting hard to find surviving children of Golden Age mystery writers (who tend not to be the most prolific people when it comes to actual propagation anyway)! I envy Doug Greene starting when he did with his John Dickson Carr biography. He was able to interview actual Golden Age mystery writers! Also Clarice Carr, widow of John Dickson Carr. As you know, both Carrs were close friends of John Street and his companion (later wife), Eileen Street.

You managed to write more about Street and Stewart than you did about Crofts. Was there more source material for them?

I discovered Stewart’s correspondence with Rupert Thomas Gould very late in the project, but fortunately not too late. It is Jonathan Betts, the author of the fine biography on Gould published by Oxford University Press, who preserved it and kindly allowed me access to it. It offered a fascinating picture of an intense intellectual friendship. It’s the kind of thing historians live for finding. And what was especially pleasing was that the correspondence tended to buttress the surmises I had already made about Stewart, after reading his work. I didn’t have to go back and rework much at all, just add the new detail from the correspondence.

One thing that bothers about the “Humdrum” tag is you get the idea that these were just a bunch of “old, boring white guys,” as the saying goes. But writers write their personalities into their work, I don’t care whether they are Charles Dickens, Edith Wharton, Raymond Chandler or Freeman Crofts!

The fact is, these “Humdrums” were interesting personalities in their own right and quite distinct from each other. You would never have caught the devout Christian Freeman Crofts writing the racy stuff that Stewart put into those letters with Gould, for example. And Street had a surprisingly liberal attitude about women and marriage, compared to most Golden Age writers. Of course, in his own life it turned out he separated from his wife when he went off to World War One and apparently never returned to her. He lived with another woman for probably over two decades before he was able to marry her, on the death of his first wife. Everyone, including the Carrs, thought Street and his companion, Eileen Waller, were married. Wrong. Not so humdrum!