Posted on September 12, 2013 by pastoffences 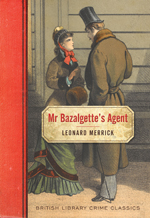 This is the latest in the British Library’s growing list of forgotten crime classics, and is arguably the most forgotten so far. Apparently there were only 5 copies known to be in existence until now.

Leonard Merrick was a respected Victorian novelist who hated, this, his first book, to the extent that he would buy up and destroy copies. In the introduction to this edition, Mike Ashley proffers one possible explanation (which I won’t share here).

Mr Bazalgette’s Agent is a brisk read, and very funny from page one:

Miriam Lea, eight-and-twenty, begins our story living in mediocre digs and down to her last four pounds thirteen and sixpence. In desperation she applies for work to ‘Alfred Bazalgette, High Holborn, private matters investigated with secrecy and despatch. Agents of both sexes.’

Just in the nick of time (she has her bags packed to leave and nowhere to go), Bazalgette finds a suitable job for the lady. One Jasper Vining, a seemingly respectable city clerk, has absconded from his place with bonds to the value of £1,500. He is believed to be touring the fashionable cities of Europe. Miss Lea is sent to track him down.

Her quest takes her from Hamburg to Lisbon to the diamond mines of South Africa. And Miss Lea will do anything to get her man…

The book takes the form of diary entries, and there is a touch of the Bridget Jones about Miriam – there’s a similarly self-deprecating and ever-so-slightly arch wit (‘Dere diry’).

Miriam is helped on her travels by her maid-cum-detective Emma Dunstan, ‘a hard-faced woman in black’ who dreams of ‘appy ‘ampstead and has a stock of hair-curling anecdotes which persuade Miss Lea to never take a confidential lady’s maid. As Dunstan warms up she becomes a bit of a liability at times.

Dunstan has been distinguishing herself; yesterday she saw a mouse in the cabin, and fainted. A good-looking steward happened to be near at the time to catch her. What a coincidence!
It seems he ran to fetch sherry, and, she tells me, ‘forced numberless glasses on her to bring her round.’ They will not be numberless when I get my wine bill, I daresay!

As a piece of detective fiction, this is very slight. Miriam simply wanders around hoping to catch sight of Mr Vining. There are no clues and no deduction. As a piece of comic fiction, it does much better (read it if you like Jerome K. Jerome). For me it also gives a refreshing view of Victorian womanhood – Miriam is strong-minded, independent, and far from docile.

See also: Revelations of a Lady Detective, The Female Detective