Posted on September 29, 2013 by pastoffences 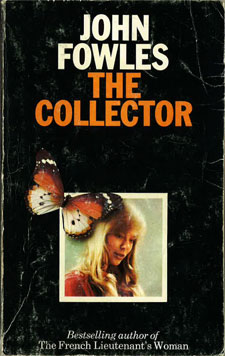 I don’t know if you play the lottery, but if you do, it might be best to have some plans in place in case you win.ﾠDon’t go in unprepared and end up in a bit of a muddle, buying a remote country cottage, fitting out the cellar as a luxury prison-cell, and kidnapping an art student.

Fred, our hero, is a colourless young man who works for the local council as a junior clerk, lives with his aunt and invalid cousin, collects butterflies, and carefully watches a schoolgirl called Miranda.

When she was home from her boarding school I used to see her every day sometimes, because her house was right opposite the Town Hall Annexe … In the evening I marked it in my observations diary, at first with X, and then when I knew her name with M.

Fred wins £73,000 on the football pools, leaves his job at the council, packs the aunt and cousin off to Australia, buys a big van, some chloroform and the aforementioned remote cottage. Nothing good can come of that sort of thing, and sure enough, Miranda’s living downstairs as quick as you can say ‘false imprisonment’.

Collecting is the obvious theme here. Fred collects Miranda and keeps her in a display case just like one of his butterflies. He spends a lot of time recreating her natural environment, getting the food and books she likes, and so on. In the early chapters, he sees Miranda as a butterfly – elusive, sporadic, hair like ‘burnet cocoons’.

As soon as she is trapped though, he has to begin to get to know her as a human being. And to be honest, she’s a little annoying. Miranda is at art school in London, and plays the part of liberal, liberated sophisticate to the best of her ability. Art comes from Truth, photos are ‘dead’, china ducks are suburban. She’s a wannabe Buddhist, and she hates her ‘nasty middle-class bitch mother’.

Class-consciousness plays a major part in their relationship. She’s the product of a private school and the Slade, in the process of deciding whether to reject her background and live artistically or succumb to it and become just like her mother. He’s an uneducated office-worker with a chip on his shoulder. Class and culture are the source of much conflict between the two during their mealtime conversations.

Anyway, from Fred’s perspective, he eventually finds a modus vivendi – ‘just like having a wife, an invalid one you had to do shopping for’ – albeit one with occasional escape attempts and hunger-strikes.

Around halfway through, Miranda picks up the narrative. She initially fears Fred is going to turn her into a sex slave, but that’s not going to happen. From the off, it’s clear Fred has a hang-up about ‘the obvious’. Attraction to women and the ability to attract them back is:

‘some crude animal thing I was born without. (And I’m glad I was, if more people were like me, in my opinion, the world would be better.)’

Of course we see events from her side of the reinforced cellar door, but we also get a good helping of back-story. Miranda, it transpires, has been kidnapped at a critical juncture in her life. Fred (or Caliban as she calls him) is almost a distraction in her narrative. Miranda’s story gives her an extra dimension and a bit of emotional heft. However annoying you find her, she deserves to get out of the cellar and grow up a bit.

There’s no way all this can have a happy ending, and it is ultimatelty a bathetic little tragedy with a chilling little coda.

I read Fowles’ The French Lieutenant’s Woman for GCSE and several times since, and on the evidence of that I’d expected to find The Collector literary, a little self-aware, and perhaps a bit over-clever. What I didn’t expect was a page-turner. This is a really good read, and perhaps one which no longer appears on crime fan’s reading lists. Give it a try.

9 Responses to John Fowles: The Collector