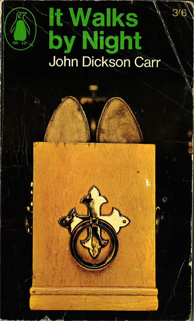 ‘You have overlooked a very solid substance which by every law of sanity should be right here in this room, but nevertheless is missing.’
‘A clue to the murderer?’ hazarded the doctor.
‘The murderer himself.’

I recently read a discussion on the Golden Age Detection group (wherein I am a confirmed lurker) about whether people actually attempted to solve the mysteries they were reading. I never do myself (although very occasionally the answer just comes to me) and I was reassured to find that even the GAD-ers don’t always try.

However, what a waste of an intellectual opportunity, so I made my mind up to give the old armchair sleuthing a try. I selected a suitably spooky tale for Hallowe’en, then read it a fortnight too late.

It Walks by Night is a locked-room mystery set in an atmospheric 1927 Paris, narrated by a young American named Jeff Marle. The investigator is John Dickson Carr’s first series detective, Henri Bencolin, appearing here for the first time (he went on to lead four more locked-room investigations). He is a saturnine figure…

A faint smile was lost in a small moustache and pointed black beard – the black hair parted in the middle and twirled up like horns had begun to turn grey […] In his hands a thousand facts came glittering out of the revolving jewel of Paris – lights and shadows, perfume and danger – the salon, the green-room, the pits – abbey, brothel, and guillotine, a Babylonian carnival through which he walked in the name of the prefecture.

His opponent is Alexandre Laurent, described by his shrink Grafenstein as ‘a pure case of hyperaesthesia; of lust-murder’, who has escaped, had plastic surgery, and is known to be pursuing the popular sportsman and national hero the Duc de Saligny. Saligny, you see, has just married Laurent’s ex-wife Louise.

John Dickson Carr (aka Carter Dickson) is the acknowledged master of the locked-room mystery. This time the room is in a Parisian gambling club called Fenelli’s.  The man found dead in impossible circumstances is, of course, Saligny.

The facts of the case are quickly established. Saligny was seen entering the card room at 11.30, and soon after rang the bell to summon a waiter. When the waiter arrived, he found Saligny kneeling on the floor, several feet away from his head, which sat neatly in the middle of a rug. One door to the room was watched by Bencolin; the other was overseen his one of his most trusted men. The single window offered no means of exit apart from a 40-foot drop. There had been no access up through the floor or down through the ceiling.

There is no shortage of candidates for Laurent: an annoying American tourist called Golton, his friend Vautrelle, his new manservant Gersault. But whoever did it, how on earth did they get out of the room?

Did I solve it? Yes! Well, sort of. I worked out half of the mystery early on, but didn’t get all the way there. Annoyingly, a better reading of the timeline would have made me feel a lot cleverer. I guess that’s the trick.

Even if you don’t want to solve the mystery, this is a good read. I’ve always appreciated the books of Carr for the atmosphere, which he piles on with an ornate blood-stained shovel. Mind you, you could argue that it’s almost always the same atmosphere: monocles, capes, pungent cigars, fine sherry, gas-lamps, ticking grandfather clocks, borderline hysteria, grotesque figures half-seen in the moonlight.

There it was, the same huddled gate with the lamp, when Bencolin, Grafenstein, and I arrived that late afternoon. Tall lights were winking out in the tall trees; a pale glitter rose along the Champs-Élysées, deepening to blue-grey and twinkling gleams as it sept down beyond the Arch. Out towards Neuilly the red sky hung between the dark throats of buildings, glittering with car lamps.

And what about this description of the Parisian scene-of-crime men? ‘Pecking children making a barnyard of justice.’

5 Responses to John Dickson Carr: It Walks by Night