Classic crime in the blogosphere: November 2013 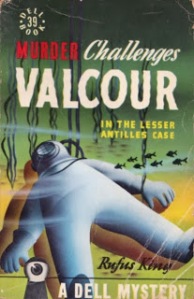 Plenty to choose from this month – see the stonking great list of links below – but I’ve chosen to highlight just a few: a mix of good and bad reviews, a bookish find, and a dash of toxicology at the end.

Moira at Clothes in Books looked at Hercule Poirot and the Greenshore Folly, unpublished until last year but retooled into Dead Man’s Folly (1956).

Apparently Christie wrote this long story, or novella, in 1954/55, prepared to donate the profits to a church near her holiday home at Greenway in Devon – she wanted to fund some stained glass windows. But, rather embarrassingly, no-one wanted to buy the story, because the length was unsuitable. So she wrote another piece – the much shorter Greenshaw’s Folly (note spelling difference), a Miss Marple story. That one sold, and the church got the windows.

Pretty Sinister Books tells the story of a real find – a vanishingly rare book, The Incredible Adventures of Rowland Hearn.

Like most detective fiction fans I had never heard of Nicholas Olde or Rowland Hern. No surprise given the fact that Olde and the quirky Rowland Hern have both been overlooked (or shunned) by nearly all of the crime fiction historians and critics. Through sheer serendipity — that miracle that usually leads me to a treasure of a book — I was lucky enough to obtain a copy through the internet in the spring of 2005. Lucky, because as I later discovered, it is among one of the rarer books in mysterydom and sought after by collectors of impossible crime stories.

Theordora DuBois is not a writer I’ve heard of, and Curt at The Passing Tramp suggests a reason for that in his review of Death is Late to Lunch:

DuBois’ Anne McNeill is so hoity-toity that she makes England’s Crime Queens Christie, Sayers, Allingham and Marsh look like a band of Jacobins by comparison.  And since she narrates the book you have to put up with her all the time.  Her more likable medical researcher husband pops in and out of the novel (primarily to discover the murder means and finally collar the killer through some technical gizmo), but Anne we always have with us.

Keishon at Yet Another Crime Fiction Blog highlights an interesting protagonist in a discussion of Charles Willeford’s The Cockfighter:

Frank Mansfield is a professional cockfighter. He’s made a name for himself in the sport. For the past 10 years he’s been obsessed with winning the title of Cockfighter of the Year at the Southern Conference Tournament in Georgia. It is the greatest achievement in one of the toughest sports in the world. To win the award means you’re the best damned cockfighter in the South and with the medal to prove it […] Frank takes a self-imposed oath of silence to help him reach his goal. He hasn’t said a word in three years.

Existential Ennui took a look at the early novels of thriller writer Ian Mackintosh, and found them, erm…

The bald fact of the matter is that A Slaying in September is really, really bad – hilariously, audaciously so – not just in terms of the tortured metaphors, or the cardboard cut-out characters, or the by turns hysterical and portentous dialogue – all of which abounds in abundance – but in the rubbish plotting too.

And finally to toxicology. Anne Harrison looks at the 30 killings by poison in Agatha Christie’s oeuvre.

In A Pocketful of Rye, marmalade is laced with taxine. Derived from the leaves of the English yew tree, taxine has a bitter taste. By disrupting microtubular function, it inhibits cell division. Death can be so rapid, however, that the common signs of a staggering gait, seizures, respiratory failure and heart failure may be missed. Most parts of the tree are toxic (save the aril surrounding the seeds, allowing distribution by birds without them being poisoned).

Beneath the Stains of Time

A Penguin a Week

At the Scene of the Crime

In Search of the Classic Mystery

Yet Another Crime Fiction Blog

You Book Me All Night Long

11 Responses to Classic crime in the blogosphere: November 2013