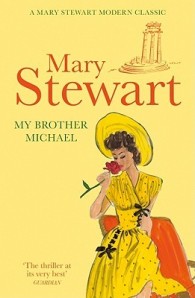 Mary Stewart’s My Brother Michael is a Greek-set thriller in which a romantic classics teacher gets involved in her new boyfriend’s treasure hunt in the mountains above Delphi.

Sir Arthur Conan Doyle’s The Sign of Four is the second Sherlock Holmes novel. It’s a series which seems to be taking off, so well worth checking out.

A nice thing about Christmas is that I get to read some books which are not actually crime fiction. Not that I couldn’t do that under my own steam, but I don’t get around to it much. A couple of recommendations from this selection:

Mark Forsyth’s The Elements of Eloquence looks in detail at the components of stylish writing, starting with alliteration and moving trick-by-trick through an unorthodox canon stretching from Shakespeare to Sting. Along the way, it actually answers a question I’ve been nurturing lazily for most of my adult life: Why are adjectives in a particular order? The order is: opinion – size – age – shape – colour – origin – material – purpose – Noun.

So you can have a lovely little old rectangular green French silver whittling knife. but if you mess with that word order in the slightest you’ll sound like a manic.

Neil Perryman’s Adventures with the Wife in Space looks at the story of a man watching all of the classic Doctor Who episodes with his initially unenthusiastic wife. It’s very readable, funny in places and sweet in others, and you can *probably* enjoy it without knowing much about Doctor Who. It’s all recorded in Perryman’s blog http://wifeinspace.com.

Anyway, two strong contenders for crime fiction of the month, but it has to be Sherlock.

4 Responses to The last monthly wrap-up of 2013