Posted on February 9, 2014 by pastoffences 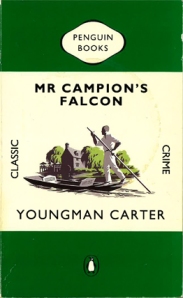 The weekend’s big activity was dusting the downstairs bookshelves. Amongst other forgotten treasures hidden behind the Minor Offences’ jigsaws I unearthed my first edition of Mr Campion’s Falcon, the second solo effort by Margery Allingham’s husband Philip Youngman Carter. However, the coffee-ringed Penguin edition shown to the left was the one I read for this review.

Omega stretches from London to Peru and New York to Xanadu, under several hundred company titles. All that you know of them is the tip of the iceberg… Cash is the driving force and it buys international brains, unemotional craftsmanship, expensive equipment. It’s a new world, Albert…

But now Corkran has a job which needs the amateur touch. One of Omega’s top geologists, Francis Makepeace has vanished. His relationship with Omega has always been rocky (geologist, you see), and now there are fears that he is going over to the competition with secret information. Corkran wants Campion to look into the matter.

The first point is one of pure snobbery: you can move around in circles where you would not be particularly remarked – you always specialized in behaving like a civilized nonentity… The second is that you are unlikely to succumb to a bribe and it is conceivable that one might be offered. And the third is that this is just the sort of problem you like.

The sharks are already circling, attracted by the scent of oil money. The baddie-in-chief, grossly fat and asthmatically wheezing his way around the story, is Claude Porteous. Porteous looks and behaves like a Wilkie Collins villain, operates from a caravan disguised as a lorry, and talks in tautologies:

Certainly I am intruding and without authority. I make no apology and it is difficult to see what you can do by way of redress, of retort.

Dragged in to the mystery are beautiful young archeologist Anthea Peregrine and her undergraduate boyfriend Oncer Smith. Peregrine is very independent, very modern, and openly contemptuous of the ‘moonshine and melodrama’ of Porteous:

I don’t want to be tied up and left on the railway line before the express thunders by, so I’ll eat your sandwiches. I hope that coffee isn’t drugged with some secret poison unknown to science.

However, Porteous is memorable not only for his pantomime villainy but for his cold-blooded and efficient nastiness. If he can’t bribe you, he’ll bully you, if he can’t bully you, you’ll be removed somehow.

Last week I reviewed Mr Campion’s Farthing, and talked about the stylistic similarities to Le Carré and its echoes of the themes commonly employed by Allingham in her own Campion novels. Falcon is less obviously derivative, and seems like a new direction for the stories. There is definitely a feeling that Campion, though still effective, is being sidelined by the modern world. One of his biggest challenges is getting Omega Oils employees to work with an amateur hireling. And then he can’t get Miss Peregrine to talk to him. But the bespectacled old sleuth still has some tricks up his sleeve and proves that a ‘universal uncle’ can still come in handy.

I am entering Mr Campion’s Falcon in the 2014 Vintage Mystery Reading Challenge (book with an animal in the title category).