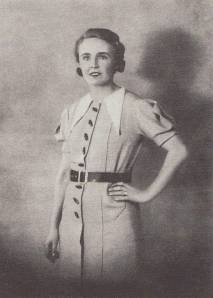 Elizabeth Orme: Who held a final clue to the mystery without being aware of it.

‘If Miss Haslett left her money in Paris, why on earth should she have been murdered on her return with empty pockets to London?’
Martin nodded gravely.
‘That sir, is a bit of a facer, and the going doesn’t look any too good at  the moment.’
The Chief Inspector held up a warning hand.
‘There is just one thing I don’t want you to tell me about the Brighton truck mystery.’ he said. ‘I’ve heard it too often of late.’
‘Meaning, sir?’
‘Don’t come back and tell me that this is the perfect crime.’

The opening to The Norwich Victims is a bit of a joy – a collection of photos of some of the principle players. Hermione Taylor, ‘prepared to commit murder, but not to make a habit of it’. John Throgmorton, ‘whose crimes are obvious, but not easily detected.’ Not a feature I’ve ever seen in a book before.

Miss Veronica Haslett, the spinsterish housekeeper at a Norwich prep school, ‘neat grey hair strained almost to breaking point to form a hard bun at the back of the head’, wins 750,000 francs in the French lottery. Ignoring the prudent advice of the school’s headteacher, Robert Hedlam, she falls straight into the hands of a dodgy investment advisor named John Throgmorton.

No sooner has she arrived in London and anxiously chartered her first taxi than Throgmorton and his live-in ‘secretary’ Hermione Taylor have done her in. Taylor disguises herself as Miss Haslett, flies to Paris and collects the poor old dear’s winnings. Miss Haslett ends up in a sack on a railway truck bound for Brighton. Meanwhile, Throgmorton rigs up a convincing alibi that proves all-but-unbreakable when Scotland Yard gets on the case.

Coincidentally, Inspector Martin of the Yard is stepping out with Elizabeth Orme, niece of Robert Hedlam. The relationship takes him up to Norwich regularly and he picks ups the investigation thanks to his local connections. Martin (in his photo, he’s unfortunately reminiscent of a certain politician at his most ham-faced) is a fast worker and soon has his suspicions about Throgmorton. But the ‘crimes are obvious, but not easily detected‘ – remember?

The plot is thickened by Greening, a teacher at the prep school with an unfortunate taste for the London high life which leads him into the hands of Throgmorton in his secondary capacity as a moneylender.

This is a mix of inverted mystery – we are privy to all of Throgmorton’s machinations and follow Inspector Martin’s investigation as it progresses – and suspense. The crimes are far from over and there is no knowing how far the evil stockbroker will go.

The style is warm and readable, and the book was finished almost before I knew it – always a great recommendation. Definitely one to check out.

‘Francis Beeding’ was actually two people – Hilary St George Saunders and John Palmer – who together wrote more than 30 novels 1925 and 1946, including The House of Dr. Edwardes which was adapted by Hitchcock as Spellbound. This book was also filmed, as Dead Men Tell No Tales in 1939, but I can’t find much information online.