‘Hattie is as dumb as a fish’, or, Appatha Christie 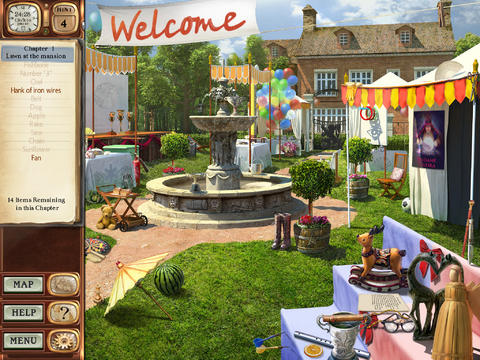 “You’ll need to race against the clock to find hidden objects that have been cleverly tucked away in different scenes from each story. Some objects will help you solve the mystery — while others are red herrings that will send you in the wrong direction.”

Undaunted by my inability to actually view or play apps, because I stupidly bought what is basically a Betamax tablet, I’m going to continue to bring you news from the digital cutting edge of crime fiction (last time it was the Sherlock app, this time it’s Agatha Christie).

‘Agatha Christie: Dead Man’s Folly is the new iPad version of the PC game that has been downloaded more than 30 million times. This ultra addictive game has you join famed detective Hercule Poirot in a mockmurder [sic] hunt at the enchanting Nasse House in the English countryside.’

Judging from this screen, the cast of characters resembles the original book, as does the set-up.

The cast of characters, which includes the typically 1930s English line (top right): ‘The wealthy owners, Sir George and Lady Hattie Stubbs. Hattie is as dumb as a fish.’ Is that actually in the book? Plus, what is that hat?

The game can be downloaded for Android and iOS now. Unless you have a Blackberry Playbook. I’d love to know if it’s any good.

P.S. Who remembers when adventure games looked like this? I never got much further than the Hobbit’s comfortable tunnel-like hall (not a euphemism).

6 Responses to ‘Hattie is as dumb as a fish’, or, Appatha Christie