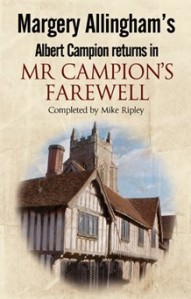 There’s quite a fashion for reviving old sleuths. Last year Jill Paton Walsh returned to the adventures of Lord Peter Wimsey in The Late Scholar. John Banville’s much-heralded take on Philip Marlowe has just appeared in paperback as The Black-Eyed Blonde. Bond returned (again) in William Boyd’s Solo last year. Sophie Hannah has recently handed over a new Poirot to her publishers. More quietly, perhaps, my own personal favourite Albert Campion has been resurrected. I was delighted to receive my review copy last week.

Mr Albert Campion first appeared in the 1929 adventure The Crime at Black Dudley, and had a successful career spanning 41 years. In that time, in contrast to his Golden Age contemporaries, he aged both physically and emotionally. The silly ass in the jolly caper at Black Dudley gave way to the 1930s sleuth, to the wartime intelligence man, to the more measured postwar consultant, happy to take a back-seat.

His creator Margery Allingham built her reputation on the ability to create atmosphere and mood – best displayed in the fog-bound thriller The Tiger in the Smoke, generally regarded as her masterpiece.

Allingham fans will know that the Campion books were continued after her death by her husband Pip Youngman Carter (see my recent reviews of Mr Campion’s Farthing and Mr Campion’s Falcon). His version of Campion continued in the downbeat vein established by Allingham in her postwar books, but put him in a more convincing milieu: espionage (Cold War and industrial varieties).

Now, small publisher Severn House has published a continuation of the series, written by Angel creator Mike Ripley and set in 1969. In his introduction, Ripley says the book is based on an unfinished Youngman Carter manuscript entitled Mr Campion’s Swansong, which I haven’t read, but to me, Farewell seems to hark back further than that, to an earlier era of the Campion novels.

The setting is pure early Allingham. The Suffolk village of Lindsay Fairfax is a picture-postcard sort of place, where tourism has become the main industry, driven by the beauty of the place and some famous former residents. There is even a picturesque network of not-so-secret passages between some of the principal buildings. The village is managed by a medieval secret society called the Carders, a cabal of nine landowners and other worthies who make sure nothing disturbs the tranquility of this ‘carefully preserved goldmine’. 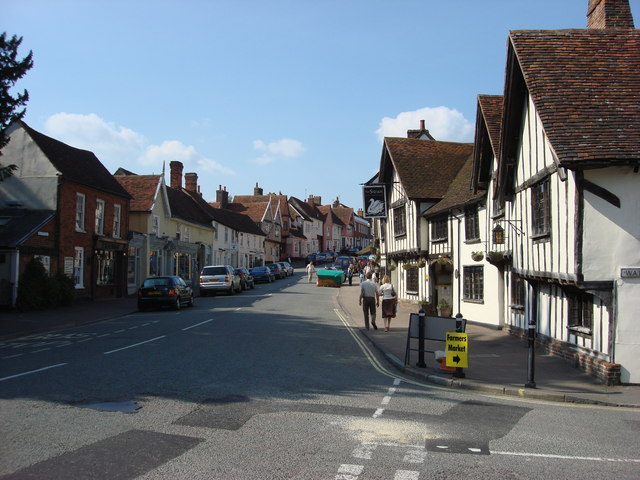 Lavenham in Suffolk – the real-life Lindsay Fairfax? Image © Copyright Oxyman and licensed for reuse under a Creative Commons Licence.

Things in Carfax tend to happen in nines: nine Carders, nine ways into the town, nine-day abductions of trouble-makers, nine oaks, nine steps to the church. Of course it’s the abductions which have caught the interest of Campion’s old friend in the Met, Charlie Luke, who briefs him in their old haunt The Platelayer’s Arms. No less than three times, people threatening the stability of Lindsay Fairfax have vanished for nine days and then returned alive and well and prepared to play the game (or not, in one case). The disappearances have become known as ‘Nine Day Wonders’.

‘A mystery to me,’ said Luke, conjuring an amorphous shape into the air by fluttering his hands,’is a pain in the neck, meaning leg-work; reporting in triplicate and prodding strangers until they don’t know if it’s Wappitty Goorie night in Peru or the wife’s birthday.’

Of course Campion loves a mystery, but it is only the presence of a favourite niece, working as a landscape painter in the village, which induces him to make a visit.

If the setting is 1930s-style Campion, so is the old sleuth himself. Grey-haired now, but playing the fool as he did in his earlier career (Campion’s tactic as a young ‘tec was to be underestimated). Facetiousness is the order of the day.

‘Everyone except me seems to have a hat,’ Mr Campion simpered foolishly. ‘I feel positively underdressed.’
Fuller handed him a deerstalker, which Campion took with an enthusiastic grin and slapped on his head.
‘How splendid! I’ve always wanted one of these.’
‘I tried one once, for a bet,’ Fuller said dismissively, zipping his coat and turning away. ‘Made me look like a simpleton.’
Mr Campion straightened his new headgear and said, quietly and to himself: ‘That’s just the look I was going for.’

Despite his youthful behaviour, Campion is slowly realising that sleuthing is a young man’s game. In the middle of the book Campion suffers some embarrassment and the action moves to Addenbrooke’s Hospital and thence to St Ignatius College in Cambridge. There’s a reunion with his wife Amanda and trusty sidekick Lugg. To be honest, this section was a bit ‘hey, the gang’s back together’, but it would be pretty hard to resist the temptation to put in Lugg, so it is to be forgiven.

‘I could slip into this Carfax place on the q.t. and blend in wiv the indigenous population, find out what’s what. Shouldn’t take me more than a couple of evenings in the saloon bar.’

Meanwhile, the younger Mr Campion, his son Rupert, is dispatched on an investigative second honeymoon to Monte Carlo with his new wife Perdita. They are a thoroughly likeable pair and carry off this section of the story well.

Of course the third act sees Campion return to Lindsay Carfax for a final showdown. But will experience win the day, or will this be a literal farewell?

The setting is well realised. Lindsay Carfax is a gift to a writer, and the long and apparently chequered history of the wool trade in East Anglia lends some heft to the traditions of the village.

The cast is lively. You get the feeling Campion enjoyed being brought out of retirement for this case, as did his friends and relations. Ripley captures Charlie Luke, Amanda Fitton and Lugg well in their brief cameos. Campion’s niece, Eliza Jane Fitton is a convincing 1960s dolly bird (her words), and her short-tempered, not to say violent, boyfriend Ben Judd is a good complement to her: the couple echo many of the slightly bohemian artistic/creative pairings in Allingham’s novels. Rupert and Perdita are a less textured pairing but have a lot of charm. The stand-out character is Clarissa Webster, the flirtatious proprietress of the village souvenir shop, who sets her cap at our hero.

Overall, an enjoyable tribute. Hopefully Mr Campion’s Farewell will help return Campion to some of his former reputation.