‘It’s a great responsibility as you could be messing with readers’ heroes.’ Mike Ripley on reviving Albert Campion 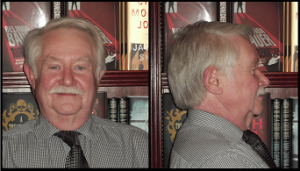 Mike was kind enough to answer some of the questions that occurred to me as I read. Here are his answers…

You write in your introduction that Mr Campion’s Farewell is based on a fragment of a story by Margery Allingham’s husband Philip Youngman Carter. How much was there to work with? And have you used it verbatim, or simply as a launchpad for your own story?

Youngman Carter left basically the first four chapters. He introduced about a dozen active characters and a fair few ‘background’ ones from this history of ‘Lindsay Carfax’. It was the setting of Lindsay Carfax which was the most important in my view and certainly the thing which inspired me because I saw it as Lavenham in Suffolk. Once I had the place in my mind, and could put Albert Campion there, the rest followed on. Youngman Carter left absolutely no plan or synopsis as to how he saw the plot progressing, so in a sense I had a free hand.

The tone of Farewell seems a lot closer to the 1930s Campion novels than Allingham’s later works, and certainly the Philip Youngman Carter books. How much of the tone came from the text written by PYC?

It is difficult to say from the fragment that was left as to whether PYC was changing tack. Certainly the initial scene with Charlie Luke harks back to earlier Allinghams. The one thing I was conscious of was that die-hard Campion fans always thought that PYC’s books were lacking the humour and warmth of Margery’s work and I was determined to put that back in. A great Campion fan wrote to me and said I should ‘go for it’ and described Margery’s style as ‘coherent daftness’, which I think is a wonderful description. If my book reminds readers of Margery’s 1930s Campions, then I’ll take that as a compliment and be very flattered.

PYC mentioned LSD almost in passing in his first chapter, referring to suspicious deaths in Lindsay Carfax. I ran with that idea, turning those deaths into a key plot-point, which seemed right for a crime story set in 1969. I have no idea whether Youngman Carter would have gone down that road – he simply left no clues at all.

There’s a fashion for reviving old characters at the moment. It’s quite a responsibility and likely to attract some flak from purists. Were you nervous about that? Have you compared notes with the likes of Sophie Hannah?

It’s a great responsibility as you could be messing with readers’ heroes. My defence is that Albert Campion has been a hero of mine for over 40 years and I wanted particularly to please the members of the Margery Allingham Society, which I think I have. (At least they haven’t sent me threatening letters – yet.) In a way, with Bond, Philip Marlowe, Lord Peter and Hercule Poirot all being revived, it would be outrageous if Albert Campion wasn’t! I have certainly talked with Robert Ryan about his revival of Dr Watson and I know both Jill Paton Walsh and Sophie Hannah (in fact all four of us are on a panel together at this year’s Crimefest in Bristol in May) but we didn’t compare notes. I did ask novelist Andrew Taylor and Allingham biographer Julia Jones to read my first draft, along with very knowledgeable members of the MA Society. All were very helpful and very encouraging.

There are a few in-jokes. Do you have a favourite?

The most fun I had was writing the scenes in Cambridge where Campion picks the brains of various pompous Dons and dedicated Campion fans will find many references to previous Allingham novels. My favourite though is the little homage to the opening lines of Ian Fleming’s Casino Royale which appear in Chapter 14.

Any hints as to what’s going to occur in the sequel, Mr Campion’s Fox?

The daughter of the Danish Ambassador goes missing. Her boyfriend turns up dead on a de-militarised bit of the Suffolk coat where the nearest town looks suspiciously like a cross between Orford and Southwold. There’s a brewery there run by two eccentric spinster sisters – but they are by no means the only strange characters. It’s a murder mystery with red herrings of espionage (including some really inept spies) and a wartime love story. Rupert and Perdita Campion are thrown into the front line again, there’s a vital cameo for Lugg and Lady Amanda naturally knows what’s going on before anyone else! At least I think that’s how it’s going to go…

6 Responses to ‘It’s a great responsibility as you could be messing with readers’ heroes.’ Mike Ripley on reviving Albert Campion