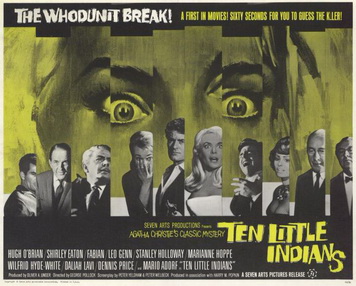 The Whodunnit Break! A first in motion pictures! Just before the gripping climax of the film, you will be given sixty seconds to guess the killer’s identity! The film will pause and on the screen you will see clues to help you decide who the murderer is…We Dare You To Guess!

Having seen the news that the BBC is planning a new adaptation of Agatha Christie’s And Then There Were None, I was interested to see this  come up in my TV listings last week.

Ten Little Indians is a 1965 British film adaptation – one of four in fact (there were versions in 1945, 1974, and 1989, plus a 1959 straight-to-TV version). Apparently the 1974 film with Oliver Reed and Elke Sommer follows the script of this one very closely – no surprise because it looks as if the same guy Harry Alan Towers wrote both (and the 1989 version too). The director George Pollock had previous Christie experience, having directed three Miss Marple films with Margaret Rutherford, but this is a much darker sort of film.

In Christie’s original novel, ten characters are stranded on an island and are murdered one by one. One of them must be the killer, but the pool of suspects keeps diminishing…

The film diverts little from this idea, but has transposed the cast to the top of a snowbound mountain. All ten are strangers, and none has met their absent host, ‘Mr U. N. Owen’ – geddit? – previously. A tape recording of Mr Owen (apparently voiced by an uncredited Christopher Lee) soon informs the group that each of them is guilty of the crime of murder, and has been summoned to pay for their crimes. Cue mistrust, paranoia, desperate alliances and frantic torch-lit hunts for the killer.

Hugh O’Brien is the leading man, although he rather blots his copy-book by basically beating up the servant Grohmann early on. Despite this, Bond girl Shirley Eaton falls for him and they manage some smouldering scenes in her room after he pockets the key and lets himself in. It must be my age, but I no longer find the imminent threat of murder sexy. Still, good on them..

I don’t know if it’s a flaw or a charming quirk, but the film appears to have had the 1960s bolted  on as an afterthought. The opening jazz theme tune is far too brassy for the film. ‘Fabian’, an actor so annoying they named him once, gives a full-on groovy performance as popstar Mike Raven, and is fortunately the first to go. Even Hugh O’Brien’s hairy chest seems like an obvious nod to the times.

There is a unique ‘Whodunit Break’ towards the end, in which the viewer is given 60 seconds to consider who they think the killer is. Unfortunately, rather than have the peace and quiet that you might need to marshal your thoughts, your concentration is wrecked by a noisy replay of all the murders.

This is an enjoyable if not brilliant movie, worth your time but probably not worth seeking out.

See also: Movie Metropolis: ‘The problem is that the book was already made into a much better movie twenty years earlier by director Rene Clair, and no other versions since have matched it. That the 1965 version is merely competent, therefore, may not be saying a lot.’