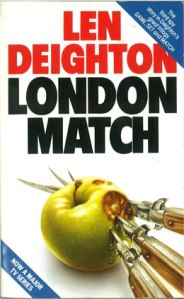 ‘There’s no one in the German section with field experience comparable to yours. You’re bright as hell, despite your lack of proper schooling and the chip you have on your shoulder about it […] You make up your own mind , and you write your reports without giving a damn about what anyone wants to hear […] On the other hand you put yourself and your personal problems before the Department. You’re damned rude and I don’t find your sarcastic remarks as funny as some of the others do. You’re insubordinate to the point of arrogance. You’re selfish, reckless, and you never stop complaining.’

And so continue the convoluted adventures of British spy Bernard Samson in Len Deighton’s 80s trilogy Game, Set and Match. Just when it looks like the dust is settling on the events of the first two books, a chance remark by a captured agent makes Samson think that there is another leak in London Central. Typically, he decides he has to keep his ideas under his hat to give him time to find the mole for himself. Otherwise he’ll end up in the frame himself.

Of course, it’s the usual game of cross and double-cross. Business as usual for Samson, but there are useful reminders that this is not just office politics.

‘It’s all part of the game.’
‘No, it’s not. People like ——— are murderers. To appease their social conscience they’ll turn over men and women to the torture chambers. What swine they are!’
‘Perhaps they do what they think is right,’ I said. I didn’t exactly believe it but it was the only way I could do my job. I couldn’t start thinking I was part of a struggle of good against evil or freedom against tyranny. The only way I could work was to concentrate on the nuts and bolts of the job and do it as well as I could do it.

Concentrating on the job hasn’t exactly improved Samson’s mood. He’s as grumpy as ever. Here he is being tailed in Berlin.

He wasn’t a private eye; whatever their shortcomings, they can all follow an errant husband and stay out of sight. And if he wasn’t a KGB man and he wasn’t a private eye, what was left? One of our own people from the Berlin Field Unit? Even my advanced paranoia couldn’t believe that one of those lazy bastards could be persuaded into action on Christmas Day.

London Match doesn’t have the twists and turns of Mexico Set, the book which got me really hooked on this series, but it is still a top-notch thriller. Bernie gets closer to the action than in the first two books, showing us some of his field-agent chops in a unexpectedly bloody encounter in an all-night launderette in Hampstead. And at the end, he comes out in front. Or at least he thinks he has – others have different opinions.

Len Deighton is yet another author who I never considered picking up because I didn’t like his covers and wasn’t particularly into espionage. If reading down the CWA top 100 list has taught me anything, it’s that it’s really worth branching out.