Bodies for Fun with a Pencil: The #1939book crime round-up

Posted on August 2, 2014 by pastoffences 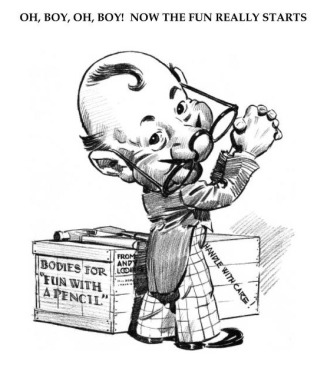 Andrew Loomis’ Fun With a Pencil, a classic guide to cartooning, appeared in 1939. You have to look at the words on the box if you ever want to understand the title of this post.

Last month I threw down the gauntlet and asked my contributors to pick a year as a theme for July. Moira from Clothes in Books stepped forward with 1939.

It was a stonking (as Moira would say) year for crime: in fact it seems like most of the best books of the year qualify as crime fiction.

In the world of real books, John Steinbeck’s The Grapes of Wrath is obviously the stand-out title. but the reading public also got Finnegan’s Wake, the unforgiveable Old Possum’s Book of Practical Cats, and the underwhelming The Secret Life of Walter Mitty (I love Thurber in general, though).

Thanks very much to everyone who has played this month – I’m quite overwhelmed with the response.

Tracy at Bitter Tea and Mystery kicked off the month with a review of Rex Stout’s Double for Death. She read the Dell Mapback (quite envious of that – I’d love to own some Dell Mapbacks), but this image is of the first edition, featuring a fox wearing tin soldier earrings (not something you see every day). 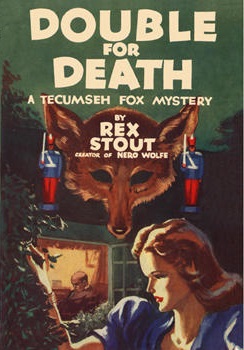 ‘[Within those 236] pages are a lot of plot twists, many characters, and a lot of disagreements with the police and the district attorney of the county. (The confrontations with the police and DA are also often elements in the Nero Wolfe plots.) The Fox series differs in the narrative voice (told in third person). Fox is strongly involved in the investigation, unlike Wolfe. Fox does have a leg man; but his “vice president” Dan Pavey just does the grunt work and often makes things worse rather than being helpful.’ 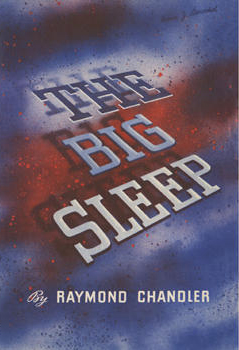 Keishon joined me in reading Raymond Chandler’s The Big Sleep (I’m going to be late for my own party here. My review of Chandler will appear next week). Anyway, back to Keishon:

As for Chandler giving hardboiled detective fiction some “class.” I can see that. His protagonist is a cynical man who knows how to run his detective business and can handle the dames and the villains. He’s smooth and no-nonsense and always ready with a smart reply. I liked him a lot because despite how insubordinate he is and his willingness to break a few rules, deep down he is principled and you can depend on him to do what’s right. 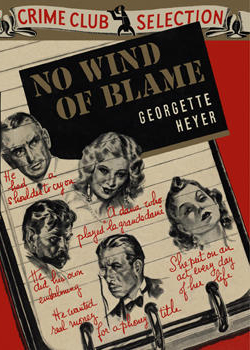 Now for Clothes in Books. Georgette Heyer’s No Wind of Blame had an excellent cover when it first appeared – ‘He had a shoulder to cry on’ and ‘She put on an act every day of her life’, which must relate to:

Vicky Fanshawe, who is hilarious. [Her life] is one long succession of roles: Sonia the Spy, Tennis Girl, A Notorious Woman. Vicky enters into her roles with gusto, and it is pure joy for the reader. Heyer resisted the temptation of making her a nitwit – she is actually very clever, manages everything very well, and is a kind good person. She is a wonderful creation. The scene where she plots (three steps ahead of everyone else) to stop her mother considering a foreign Prince as her next husband is an epic masterpiece. As Vicky says, in one of her typically fabulous turns of phrase, she had to do it because ‘it would be fatal for [Mother] just to trickle away to some frightful person on the boundary.’

Tracy returned with Anita Boutell’s Death has a Past:

….the gradually unfolding story of five women who are in effect subjugated by Claudia Hetherton, who has inherited all the wealth of the Hetherton family. Each woman either needs money that only Claudia can supply, or depends on her good will for her future happiness, or both. Claudia has invited them all to her home for a “women only” week, following on the tradition of her mother-in-law, Emily Hetherton. The week has been traditionally called “Emily’s Week,” and they go along with the tradition for one last year.

And we had a movie this time – the more the merrier,  think. John at Noirish looked at an early Powell/Pressburger collaboration called The Spy in Black. 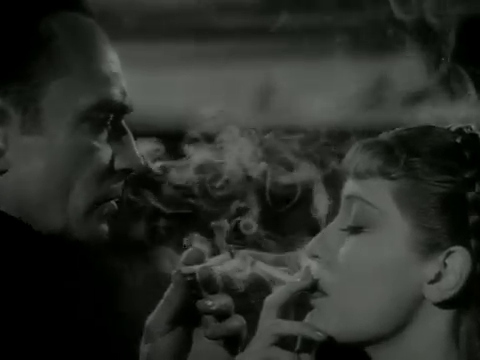 Released as it was on the eve of the outbreak of WWII, the movie displays an admirable respect for its German characters. Hardt and Schuster are portrayed as likeable fellows, and Hardt in particular as a man of great honor. When at one point he upbraids [German spy] “Fraulein Tiel” for having (as he believes) been a cog in the conspiracy that murdered the innocent and defenseless Anne Burnett, she responds by asking him if many of those aboard the ships he sinks aren’t equally innocent civilians, and we can see the point hit home.

John also looked at an Eric Ambler, Cause for Alarm, which appeared in the US in 1939 and the UK in 1938. He echoes some of my thoughts on The Mask of Dimitrios.

The sense that everything is just about to come crashing down around Europe’s ears is very strong (in this the book’s prophetic; it appeared in 1938), as is the depiction, through the often infuriating figure of Nicky, of English complacency in the face of the storm that was building. 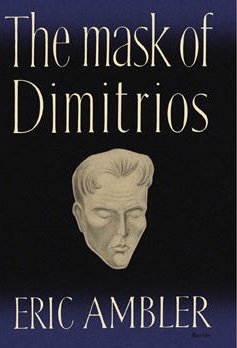 Jose Ignacio at The Game’s Afoot joined me in reading Ambler’s The Mask of Dimitrios (my review is here):

As a history aficionado, I particularly enjoyed the atmosphere of the times in which the action is set as well as the places chosen to develop the plot. Being a pioneer novel, entails the risk that some elements, over the time, are no longer original. But none of this has diminished an inch my appreciation of this novel which I strongly recommend to all genre enthusiasts. A must read in my view. 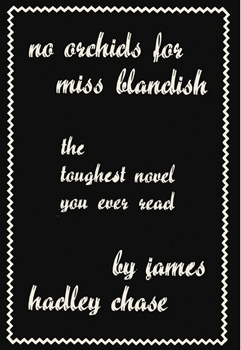 Jose Ignacio also read No Orchids for Miss Blandish ‘the toughest novel you ever read’, according to its very tough monochrome cover. A book with a fascinating genesis and one I have to read for myself.

It seems that the idea of his first novel came to him while reading the story of the legendary American gangster Ma Barker and his sons. And that he wrote No Orchids for Miss Blandish with the help of maps and of a slang dictionary. The action takes place in Kansas and Missouri, and Chase only went to the States a couple of times throughout his life. The plot is based on Faulkner’s Sanctuary (1931) and Raymond Chandler accused him of plagiarism. 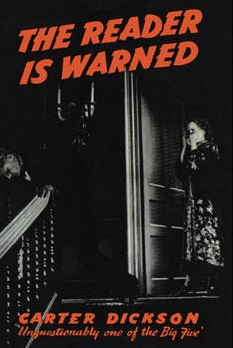 Moira turned to the master of the locked room mystery, Carter Dickson. The Reader is Warned:

The book gets off to a stonking start – the usual odd collection of people are gathered in a country house, and one of them is a ‘mind reader’ […] Lots of misdirection about the mind reader, who claims to be able to kill people via ‘Teleforce’ – kind of psychic waves. There’s a fascinating contemporary reference, given the date: ‘Well could you kill Hitler, for instance?’ ‘Who is Hitler?’ All of a sudden it was like talking to the man in the moon. I asked him where he had been for the last five or six years. He said quite seriously, ‘In various parts of Asia, where we do not get much news.’ 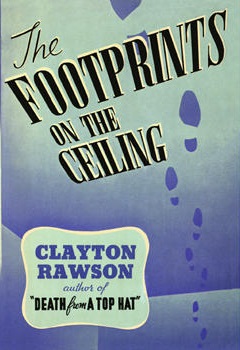 Bernadette at Reactions to Reading took on another locked-room master with Clayton Rawson’s Footprints on the Ceiling.

As locked-room stories goes this one offers the classic elements of an impossible crime, as evidenced by the plot hint provided by the title, and gets points from me for having a logical resolution not requiring any paranormal intervention or other such silliness. That said, the plot does rely on some oddities and several people having highly specialised knowledge of vastly disparate subjects. There are for example two characters with extremely rare medical conditions and different elements of the plot which rely on a knowledge of such things as photographic dark room techniques, deep-sea diving and spiritualism. But somehow Rawson – and Merlini – do pull this all together and have a lot of fun along the way. This is not a book that takes itself too seriously and there are even some mild digs at the detective fiction genre.

Col at his Criminal Library read Jonathan Latimer’s Red Gardenias and found it, erm, I’ll leave it to Col to explain… 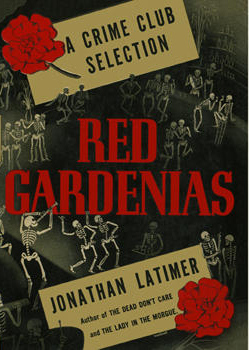 If I was comparing it to a drink, my particular analogy would be with a three day old pint of milk, left out on the doorstep in full glare of the blazing sun. Ok ….slight exaggeration then, more akin to a pint of beer that was poured out yesterday then forgotten about. It still does a job of sorts, but it’s not the best thing you’ll ever drink in your life. 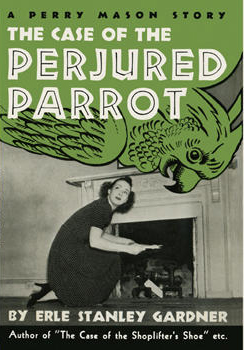 The award for best title of 1939 goes to Erle Stanley Gardner’s The Case of the Perjured Parrot (one of Gardner’s four books published that year. Curt at The Passing Tramp reviewed it for us:

There’s not much to tie this book to the specific year 1939. However, there are references to people being out of work and to Fremont Sabin’s philosophy that people are too caught up in the pursuit of material things (easy for him to say!), and these remind readers that the novel is set in a decade where there was prolonged economic depression in the United States, with people seriously reassessing their lives.

So there we have it: a snapshot of the crime fiction of 1939, with a smattering of 1938. Some significant new blood – Chandler and Ambler – amongst the established big names. Some hints of dark clouds on the horizon, but not as many as you’d expect.

‘Judge Lynch’ on the best books of 1939, over at the Passing Tramp. The judge’s verdict included the now-obscure Mabel Seeley and Dorothy Cameron Disney, along with Ngaio Marsh, Carr, Ambler and Stout, plus a Michael Innes which Curt is reading at the moment.

Apart from the cartoon at the top, all images are taken from the excellent Facsimile Dust Jackets, which only let me down on the Anita Boutell.

Next month’s challenge: Over to you guys, go ahead and pick a year 🙂

14 Responses to Bodies for Fun with a Pencil: The #1939book crime round-up