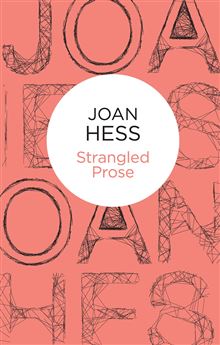 I have profiled Bello, Pan Macmillan’s digital-only imprint, previously on Past Offences. Last month they contacted me about a new edition to their roster: the cozy author Joan Hess.

Joan Hess is the acclaimed author of the Claire Malloy and the Maggody crime and mystery series, a member of Sisters in Crime and a former president of the American Crime Writers League. Her first novel Strangled Prose, which she claims ‘saved her from a life of academia’, is the first of the Malloy series and saw her nominated for the Anthony Award in 1986. Three years later A Diet to Die For, from the same series, won the 1989 American Mystery Award.

Strangled Prose is a relatively modern book for Past Offences – 1986 is just before my pointlessly arbitrary cut-off date – but I don’t mind the occasional cozy so I agreed to take a look.

Claire Malloy is the red-headed owner of the Book Depot, a renovated train depot now operating as an academic bookstore in the college town of Farberville. Claire is borderline broke, and bringing up a sparky teenage daughter alone after losing her husband in a car accident. So far, so cozy, although no cats are in evidence (an absence also noted by the Puzzle Doctor.

In chapter one the bookish peace of the Book Depot is assaulted by various characters connected with the English department of the University, situated just over the road. In particular we meet Mildred Twiller, the wife of one of the professors. Mildred has a successful career as a romantic novelist, churning out books ‘whose descriptive scenes leave even the most ardent pornographiles speechless with admiration’ under the pen-name Azalea Twilight. Mildred/Azalea is here to browbeat Claire into hosting the launch of her latest epic, Professor of Passion.

(Mildred, by the way, owns the excellently-named poodle Twilliam. Not especially relevant, but it made me laugh.)

Claire fears the event will be a flop, but even she is surprised by the disastrous turn of events at the reception. Maggie Holland, the fantastically stereotypical leader of the Farberville Women’s Organization, has got hold of an advance copy of Professor of Passion, and ruins the launch by reading some carefully selected excerpts. Each paragraph is more libellous than the last – the whole book is a thinly-veiled muck-raking exercise and has the potential to ruin several careers in the English department.

Mildred/Azalea flees the reception, and – no surprises – is found dead before the night is over. She has been strangled to death on her patio with a silk scarf. The long list of suspects includes Claire, who herself suspects Douglas Twiller:

The cop in charge of the investigation, Lieutenant Rosen, starts hanging around Claire, helping himself to the contents of her fridge. He irritates her so much that she gets competitive and starts testing suspects’ alibis herself. Eventually getting herself into trouble, of course, before unmasking the killer.

The mystery isn’t fantastically complex – it can be unravelled by selecting the least-likely subject if that’s your favoured approach (it is mine) – but the narrative voice is engagingly spiky and carries the story along at a good trot. It’s clear the Claire/Rosen dynamic could develop into a fine will-they-won’t-they relationship over a number of books. If I didn’t already know Strangled Prose was the basis for a long-running series (19 books to date), I’d say it had great series potential.

Fleur in Her World: There were lots of reasons for Claire to get involved. Her business was affected; her friends were affected, her daughter was taking rather too much interest in what was going on; she was getting on rather well with the detective in charge; and she was the kind of woman who had to do things, had to find out for herself. I appreciated that; there weren’t any of the contrivances that some books use to pull a protagonist who isn’t a professional detective in the story.

In Search of the Classic Mystery Novel: Cute animal – nope, not that I noticed.

The Encyclopedia of Arkansas History and Culture: Hess claims to have written ten unpublished romance novels before switching to mystery.