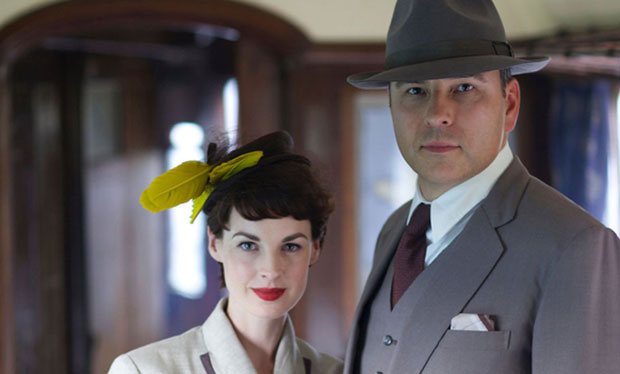 Outwardly, he’s an ordinary clean-limbed, rather block-headed young Englishman. Slow in his mental processes. On the other hand, it’s quite impossible to lead him astray through his imagination. He hasn’t got any–so he’s difficult to deceive. He worries things out slowly, and once he’s got hold of anything he doesn’t let go. The little lady’s quite different. More intuition and less common sense. They make a pretty pair working together. Pace and stamina.

Tommy and Tuppence are a couple down-at-heel bright young things, childhood friends briefly reunited in a wartime hospital (he was a patient; she was a V.A.D.), who meet again by chance outside Dover Street tube station and go for a tea in a nearby Lyons.

Tommy sat down opposite her. His bared head revealed a shock of exquisitely slicked-back red hair. His face was pleasantly ugly – nondescript, yet unmistakably the face of a gentleman and a sportsman. His brown suit was well cut, but perilously near the end of its tether.
They were an essentially modern-looking couple as they sat there. Tuppence had no claim to beauty, but there was character and charm in the elfin lines of her little face, with its determined chin and large, wide-apart grey eyes that looked mistily out from under straight, black brows. She wore a small bright green toque over her black bobbed hair, and her extremely short and rather shabby skirt revealed a pair of uncommonly dainty ankles. Her appearance presented a valiant attempt at smartness.

They are on their uppers, and agree over a cup of tea to form a company: The Young Adventurers, Ltd. Any work accepted.

Almost before they have written their first newspaper advert they get their first adventure, A Mr Whittington of the Esthonia Glassworks Company, acting very suspiciously (‘She disliked and distrusted him instinctively’), offers Tuppence a job, gives her £50 as a golden handshake, and then promptly disappears without trace. The only clue seems to be his reaction to Tuppence’s mention of the name Jane Finn. The Young Adventurers decide to get to the bottom of this mystery by advertising for news of Jane Finn in the newspaper. There are two responses to their ad. A ‘Mr Carter’, who Tommy recognises as something in the secret service, offers the Young Adventurers his support to find her:

Funds within reason, detailed information on any point, and NO OFFICIAL RECOGNITION.

Miss Finn is of strategic importance as she may have in her possession a draft treaty from 1916 which, if revealed now, would embarrass the present Government and probably throw the country into disarray. Mr Carter explains:

Five years ago, that draft treaty was a weapon in our hands; to-day it is a weapon against us. It was a gigantic
blunder. If its terms were made public, it would mean disaster…. It might possibly bring about another war–not with Germany this time! As a party cry for Labour it would be irresistible, and a Labour Government at this juncture would, in my opinion, be a grave disability for British trade, but that is a mere nothing to the REAL danger.”

A Labour uprising and general strike is on the cards anyway; the treaty would be the last straw. So it is the objective of a cabal of plotters, led by the possibly fictional Mr Brown, bent on the overthrow of Britain.

The second answer to the ad is from Julius Hersheimmer, a hustling American millionaire straight out of a P. G. Wodehouse book. He is Jane Finn’s long-lost cousin and tells Tommy and Tuppence he is determined to find her. They move in with him at the Ritz to begin the search in earnest.

The Secret Adversary is pretty flawed. The line-up of baddies is comically stereotypical, even for the 1920s:

Certainly Mr. Brown’s organization was a far-reaching concern. The common criminal, the well-bred Irish gentleman, the pale Russian, and the efficient German master of the ceremonies! Truly a strange and sinister gathering!

The Young Adventurers are brought into the story by a fairly ridiculous coincidence – Tommy overhearing the name Jane Finn, thinking it memorable and mentioning it to Tuppence, and her dropping it into her conversation with Mr Whittington. Towards the end we are asked to buy into an enormous piece of stupidity on the part of the assorted conspirators, who must be the worst searchers ever to threaten the western world. And the politics is a little bit in your face. No question about where on the political spectrum the young Agatha stood.

On the other hand, the identity of the mysterious Mr Brown is hidden with all of Christie’s skill in misdirection. The shortlist is pretty short, but I managed to pick the wrong suspect. Our heroes are not as revoltingly arch as I had feared, and certainly nowhere near as horrible as they were in the 80s TV show (which is unbelievable, if you’ve never seen it). This is probably peak twee…

‘Tommy, I do like things to happen quickly. So far, adventure has succeeded adventure, but this
morning has been dull as dull.’
‘You must stifle this longing for vulgar sensation, Tuppence. Remember that if Mr. Brown is all he is reported to be, it’s a wonder that he has not ere now done us to death. That’s a good sentence, quite a literary flavour about it.’
‘You’re really more conceited than I am–with less excuse! Ahem! But it certainly is queer that Mr. Brown has not yet wreaked vengeance upon us. (You see, I can do it too.) We pass on our way unscathed.’

…and it’s bearable. Perhaps they get worse as the series progresses. Or perhaps I have been desensitised by recently reading a Blotto and Twinks novel. Anyway, I thought they were good company, if not as good as David Walliams (who’ll be portraying Tommy for the BBC) makes out:

‘I was first drawn to the delicious notion of a married couple solving crimes together, and the more I read of the Tommy and Tuppence novels and short stories I realised they are among Christie’s very best work.’

Rob Around Books: There’s a special and rare charisma surrounding this duo, and one cannot help but root for them and will them out of the sticky situations they invariably find themselves in.

Mike Ripley recently pointed out the flaw in the BBC’s assertion that moving the story to the 1950s out it within living memory of its target audience. However, the Cold War period setting will at least make the espionage elements of the story a little more believable.