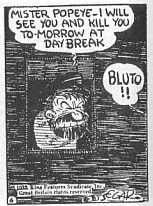 Les at Classic Mysteries chose 1932 as our focus-year for October, and once again I was inundated with entries. Thanks everybody.

(And a special mention for everyone I’ve missed. You’re the best ones.)

No children’s classic with a murderous first line this month. Instead I’ve gone with a frame from Popeye starring Bluto, who appeared for the first time in 1932.

Now onto the reviews. Note that yellow was definitely the colour of choice for crime covers in 1932.

Lucy at The Art of Words kicked us off with Dorothy L. Sayers’ Have His Carcase, the seventh Peter Wimsey (and the second Harriet Vane):

What makes this book so 1932? The Edwardian hotel and resort. The lack of telephones. The narrow, empty roads. And women’s attempts to live their own lives, working as a dancer, a writer or a landlady, marrying a younger man or not getting married at all. 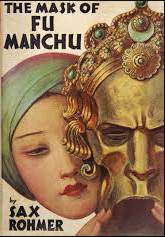 …seems exceptionally pertinent now in light of recent world affairs. It gets my vote for one of the earliest thrillers dealing with religious fundamentalism as a platform for terrorist activity […] You can only marvel at the sheer excess of this story. Fu Manchu is once again aided by a veritable army of Asians, Africans and Muslims all with dexterous agility and superhuman strength. In addition to an array of exotic poisons and mind controlling drugs there is a super strong cord created from spider silk that is used as both a weapon, restraint and as means of travelling between the balconies and rooftops of high-storied buildings. Did Stan Lee read these books, too?

I’m not sure Stan Lee had time to read books.

When we talk about America’s contributions to the Golden Age of Detective Fiction, those years between the two world wars, I know too many readers who begin to stifle yawns. Traditional, puzzle-oriented American mysteries, they say, were so dull, so cerebral, and so on and so forth. No blood. No guts. Ho hum.

Have I got a book for you.

Beheadings. Crucifixions. Cults. Nudists. An apparent multiple murderer. No apparent rhyme or reason – or so you are led to believe.

As I pointed out in my review, this is one of the bloodiest classic mysteries I have read. 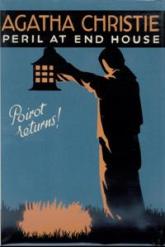 Jose Ignacio at The Game’s Afoot turned to the Queen of Crime with Agatha Christie’s The Peril at End House, a Cornwall-set Poirot mystery narrated by the trusty Hastings:

A highly representative novel of what has come to be called the Golden Age of Detective Fiction, by one of their most influential and charismatic authors.

He also found time to review Georges Simenon’s Maigret on the Riviera (known as Liberty Bar in its first edition – interesting photographic cover).

This is an excellent story, very well measured, and with the right extension. It’s quite incredible how much can be said in just a few pages. I was delighted how Maigret handles the investigation. He only listen what others have to say without jumping into quick conclusions. He’s meticulous, tenacious and able to read very well the human soul. The mystery is solved in the most satisfactory way that one can imagine. At the end, everything fits perfectly well. I’m quite convinced that this book will delight all fans of the genre. A fascinating story by a master storyteller.

Col added an Edgar Wallace to his Criminal Library: When the Gangs Came to London:

Enjoyable enough with a fast moving plot concerning rival US gangs and their efforts at extorting money from the rich and lofty in London. By chance we have a Chicago Police Detective in town. Our Captain Allerman is all too familiar with the villains having crossed paths with them more than once stateside.

… and Moira at Clothes in Books had even harsher thoughts about one of my favourite authors when she dressed down for T. H. White’s Darkness at Pemberley.

This was an earlier work, perhaps when he was looking for the right genre. It’s fair to say crime fiction probably wasn’t his genre…
The book starts well. There are two deaths in and around a Cambridge college. There is some funny business with a gramophone, which seems to show when one of the crimes occurred, and there are fully 3 map/plans: showing the college, a don’s room, and the position of the college in Cambridge (allowing us to work out that the fictional St Bernard’s lives on the site of the real-life Queens’ College). We get this truly faultless line:
“Why,” pursued the Inspector, “did the Master, who is a drug addict, post a letter to Beedon containing a blank sheet of paper with his signature in invisible ink?”

Don’t let that stop you reading The Once and Future King. 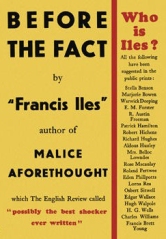 Rebecca at Ms Wordopolis Reads read Frances Iles’ Before the Fact and compared it with the Alfred Hitchcock movie version, Suspicion.

It sounds quite contemporary, but there are several things that place the book firmly in the year 1932: the economy is in shambles. Work is hard to come by, and there are limits on taking English currency out of the country, which is a crucial part of the plot. 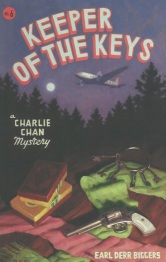 And I almost missed this one (sorry Tracey). Bitter Tea and Mystery read Earl Derr Biggers’ Keeper of the Keys, the sixth and final Charlie Chan novel.

Because it was written in 1932, I was surprised to see that a charter airplane and its pilot feature prominently in this book. The picture of the sparsely populated area around Lake Tahoe in the early 1930’s is intriguing.

Tracey points out the development in the series, especially in terms of Chan’s character:

By this last book in the series. Charlie is spouting aphorisms very frequently and just about as much as in the movies.

So that’s 1932 wrapped up then. I said on the sign-up page that the spookiest entry would get to choose November’s year. I reckon it’s between the Ellery Queen and the Fu-Manchu. Les picked 1932 for us, and I can’t choose (risk-averse), so that leaves us with John at Pretty Sinister. Over to you, John.