Edgar Allan Poe: The Murders in the Rue Morgue 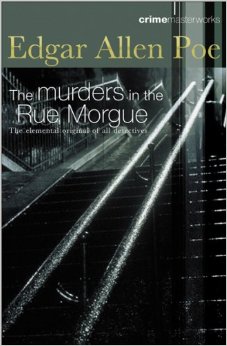 This was the first of my Christmas presents from Mrs Offences, (when asked what I wanted, my daughter apparently said ‘smelly old books, smelly old socks’…)

The back of this edition points out that:

In just five stories, Edgar Allan Poe laid down most of the ground rules of detective fiction. In the three tales featuring Auguste Dupin (‘The Murders in the Rue Morgue’, ‘The Mystery of Marie Rogêt’ and ‘The Purloined Letter’) he created the Great Detective, not to mention the locked-room mystery, the notion of armchair detection and the secret-service story; ‘The Gold Bug’ revolved around the use of cyphers; and ‘Thou Art the Man’ made use of false clues and the least likely suspect.

I am sure that everyone who wants to read Poe has done so by now, so I won’t write a general review. What struck me most was the colossal nerve of the man. This is an affectionate criticism, but we are asked to swallow an enormous amount of hokum whilst he invented the genre.

‘The Murders in the Rue Morgue’ has a well-known solution which pretty much beggars belief (I have shared my collection of spoiler covers previously). But aside from that, the business near the beginning, when several witnesses of different nationalities each identify the shrill voice heard in Madame L’Espanaye’s chambers as speaking each other’s languages, is just daft.

The shrill voice was very loud–louder than the gruff one. Is sure that it was not the voice of an Englishman. Appeared to be that of a German. Might have been a woman’s voice. Does not understand German […] The shrill voice was that of an Englishman–is sure of this. Does not understand the English language, but judges by the intonation […] Thinks it is the voice of a Russian. Corroborates the general testimony. Is an Italian. Never conversed with a native of Russia.

Marie Rogêt is the most sensible of the stories, probably because it was a thinly veiled version of a true crime (the murder of Mary Rogers, who was found in the Hudson River in 1842).

The third and final Dupin story, ‘The Purloined Letter’, features an incriminating letter stolen from a prominent lady by the Minister D—-. The police have failed to find it after an extensive search, but Dupin manages to get hold of it without breaking sweat. The details of the police search are ridiculous. Here’s what they did just in the library:

‘We opened every package and parcel; we not only opened every book, but we turned over every leaf in each volume, not contenting ourselves with a mere shake, according to the fashion of some of our police officers. We also measured the thickness of every book-cover, with the most accurate admeasurement, and applied to each the most jealous scrutiny of the microscope. Had any of the bindings been recently meddled with, it would have been utterly impossible that the fact should have escaped observation. Some five or six volumes, just from the hands of the binder, we carefully probed, longitudinally, with the needles.’

In ‘The Gold Bug’, a coded message leads decayed nobleman Legrand to some buried pirate treasure. How is the message discovered? Legrand’s servant Jupiter picks up a stray piece of parchment to wrap around an interesting insect, then Legrand lends the insect to a friend – like you do – but keeps the parchment for some reason. Later on, he uses it to draw a picture of the insect for another friend (the narrator). The narrator holds the parchment close to the fire, warming it up, revealing the secret message on the other side, which for some reason he doesn’t notice, before handing it back to Legrand, who does. Never mind the deciphering, just getting the message at all beggars belief.

The final story, ‘Thou Art the Man’, is a least-likely-suspect tale which also launched the concept of spooking a murderer into confessing. The mechanism for this is just plain bonkers and I’m not sure it isn’t almost as bad as murder. This is at a dinner party, and a crate of wine has just arrived…

Being then requested to force open the lid, I complied, of course, ‘with an infinite deal of pleasure.’ I inserted a chisel, and giving it a few slight taps with a hammer, the top of the box flew suddenly off, and at the same instant, there sprang up into a sitting position, directly facing the host, the bruised, bloody, and nearly putrid corpse of the murdered Mr. Shuttleworthy himself. It gazed for a few seconds, fixedly and sorrowfully, with its decaying and lack-lustre eyes, full into the countenance of Mr. Goodfellow; uttered slowly, but clearly and impressively, the words—”Thou art the man!” and then, falling over the side of the chest as if thoroughly satisfied, stretched out its limbs quiveringly upon the table.

The remainder of Poe’s Tales of Mystery and Imagination

Note: They are not in this edition, but in order to qualify this book for my mission to review the CWA’s  top 100 crime novels, I have read the remaining stories from the 1852 edition of Poe’s Tales of Mystery and Imagination. There’s a reason they’re not as famous as the others…

‘The Facts in the Case of M. Valdemar’ is the story of what happens when you hypnotise someone on the point of death (unwise).

‘Some Words with a Mummy’ is a heavy-handedly humorous piece about some scientists unwrapping a Libyan mummy. I did relish this paragraph:

As no trace of an opening could be found, Doctor Ponnonner was preparing his instruments for dissection, when I observed that it was then past two o’clock. Hereupon it was agreed to postpone the internal examination until the next evening; and we were about to separate for the present, when some one suggested an experiment or two with the Voltaic pile.

‘The Premature Burial’ is told from the point of view of a survivor of burial and is hideously overwritten:

“I was mortal, but am fiend. I was merciless, but am pitiful. Thou dost feel that I shudder.—My teeth chatter as I speak, yet it is not with the chilliness of the night—of the night without end.

‘A Descent into the Maelstrom’ takes its young hero almost into the bottom of a whirlpool, which then spits him out as an old man. Again, much too florid.

10 Responses to Edgar Allan Poe: The Murders in the Rue Morgue