For March’s challenge, Bernadette of Reactions to Reading chose 1967, picking up an early effort from the great Ruth Rendell’s A New Lease of Death, but regretting it massively: 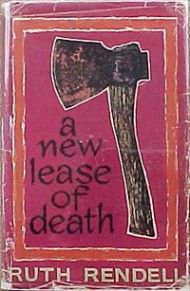 There is no mystery to speak of. Maybe 1967 readers weren’t as well versed in the twists that might accompany a whodunnit but I thought the resolution screamingly bloody obvious early on. It was like being at a children’s panto where no one was shouting “he’s behind you” but everyone should have been. And even if I hadn’t cottoned on to the twist I would have been bored by the storyline. The sleuthing, such as it is, is very insignificant stuff.

There are some great discussions of social attitudes in 1967 underneath Bernadette’s review.

Moira also read the Rendell for Clothes in Books and was similarly underwhelmed:

I have to give Rendell credit for highly authentic other details, making it very much a book of 1967: the misery of British small towns, bad coffee, hotels that don’t want to serve you food, dinner dances, horrible cafes, everyone smoking the whole time. And, a drink driver knocks down and kills a pedestrian, and no-one seems to take that very seriously. All of it all too convincing.

One of the long series of krimi movies loosely (usually very loosely) based on works by Edgar Wallace and designed to make as little sense as possible.

What is a krimi, I asked myself. John anticipated my question…

Trying to judge them by the same standards you’d apply to other movies/works of fiction is pointless and unproductive. All one can sensibly (as it were) do is just enjoy them for what they are.

Bev at My Reader’s Block also flirted with eccentricity for her two submissions this month. The first was Death and Mr Prettyman by Kenneth Giles:

Giles writes a rather eccentric mystery. Throughout the entire book the dialog reads like a vaudeville act or an old Abbott and Costello routine. The reader is constantly poised for the “badum-tish” at the end of any given conversation. And yet the camaraderie between James and Honeybody is genuine and a great deal of fun.

She followed up with Patricia Moyes’ Murder Fantastical:

aptly named–for a more fantastic bunch of characters would be hard to come by. The book is worth it for the description of Bishop Manciple’s visit to a new neighbor to borrow some margarine. He arrives dressed in “an old-fashioned bathing costume… Wellington boots… carrying a flowered Japanese sunshade, a clarinet, and a string bag” while on his way to the river for a swim and a little musical practice. 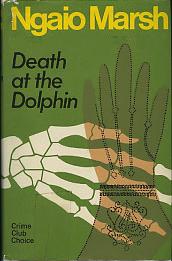 Moving on to more sensible fare, Lucy at The Art of Words re-read Death at the Dolphin – one of her three favourite books by Ngaio Marsh

I love the atmosphere – of a London aware of its history, and still grimy and semi-ruined, 20 years after the war. That’s how I remember it. A sense of place was one of Marsh’s strong points: she puts us in the two boys’ bachelor flat (on the south bank, where they can just see the Dolphin Theatre); in the refurbed theatre itself, with Victoriana lovingly restored; in Conducis’s mews house full of antiques that minions have chosen for him. (In 1967, despite space-age fashions and determined modernity, it was becoming quite respectable to like Victoriana.)

Rather less innocent than Ngaio March is Ira Levin’s Rosemary’s Baby, reviewed at Mysteries in Paradise.

…on the very edges of crime fiction, ROSEMARY’S BABY  is a horror story, showing that there is no safety in your own home either. There is a cinematographic quality to the action, and I kept imagining how chilling it would be on the silver screen.

Scott of The Nick Carter and Carter Brown Blog looked at Carter Brown’s Target for Their Dark Desire:

Elinor liked her work very much. And she never figured to end up dead in her own bed. But she was nonetheless very dead and Police Lieutenant Al Wheeler was asked to find her murderer… Some bedding of the female suspects and another murder and things heat up nicely.

Sergio tipped his fedora at The Man on the Balcony (or Mannen på Balkongen as I like to call it. In the original Swedish.)

It is never so heavy-handed as to get in the way of the narrative, but provides us with a fascinating view of Swedish society, under-funded and stuck in its ways, that is none the less on the cusp of change. It is this part of the series that probably makes it stand out and which had such a big influence on the Scandinavian authors that followed in their path – but Maj Sjöwall and Per Wahlöö were superb storytellers too. If you haven’t sampled their joint efforts, you really should.

A new author for me – Mildred Davis’s The Sound of Insects appeared at Peggy Ann’s Post.

This was another excellent book […] She does suspense well! Johnny seems to be blackmailing everyone in town. Finally he meets his match and someone puts an ice pick through his heart. They should have felt safe now but then the whispering phone calls started! His mother is acting strange and snooping around, determined to find the killer. Making all kinds of innuendos. Pitting one neighbor against the other. Is she the one making the calls?

… one of Christie’s most ambitious books. Her command of the genre seems to have reached its peak and she feels herself strong enough as to subvert her own canon. It could have been quite original at its time and Christie was very much pleased with it to the point of including it among her favourite books. However today there seem to be conflicting opinions. I won’t consider Endless Night among my favourites, but the decision is up to you after having read it.

He also read the book with my favourite cover of the month, Donald E. Westlake’s God Save the Mark, which sounds like a lot of fun, a ‘fast paced comedy nicely told and very well written, and full of unusual characters, clever jokes and crazy situations where finally all the pieces of the puzzle fit into place’:

Fred Fitch is a man who is both pure of heart and substance but utterly credulous. If there is a scam operating anywhere–his rooming house where the General needs a loan to print his revelation of the secret history of the government, the street where the Little Sisters of the Poor are raising funds for the homeless, or just about anywhere in between–Fred finds it or it finds Fred to the same uncertain end.

Watson’s style is a blend of graceful wit, intricate plotting, and all out farce. In Lucilla Teatime he has created one of the most sophisticated badass biddies I’ve encountered in the genre. She continually surprises the reader with her own devious plans and her impressive knowledge encompassing everything from amateur botany to the mechanics of French sports cars.

Meanwhile, Col got lucky this month for once (he’s had a terrible run of books for this challenge), enjoying Jim Thompson’s Ironside:

I really enjoyed this one, particularly when Thompson plants you inside Ironside’s head. Is he a decent man, for not acting on his implied feelings towards his attractive assistant, Eve or is he an old lech for having those feelings in the first place? Was it commonplace in a 60’s work environment for an authority figure to want to admonish a female by the application of a smack on the backside, or is there a darker side to our main character’s psyche? I get the feeling Thompson had a bit of fun pushing the boundaries as far as he could with this.

Over at In Search of the Classic Mystery Novel was Ellery Queen’s Face to Face:

I wonder… what would I have thought about it if I hadn’t spotted the killer? Would the puzzle have been enough for me to sing the praises of this one to the rafters? I honestly don’t know.  A puzzle that fools me will (almost) always overcome shoddy characters, but this one didn’t fool me at all. Recommended, provided you let me know if you were fooled… 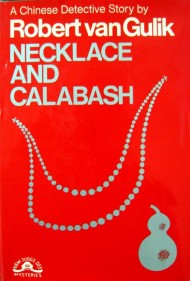 It sounds complex, but it really isn’t and that was disappointing.  I guessed part of the mystery very early on, though not the rest, so it was clever enough on that score. I deeply dislike gangs and torture, so if that’s a standard in Dee stories, I might not read anymore.  Not that it was too much grisly detail, but I just don’t find that sort of thing interesting.

Finally, Tracy at Bitter Tea and Mystery brought in the month’s only thriller, Cast a Yellow Shadow by Ross Thomas:

McCorkle narrates the novel. Here we have a man who may never see his wife again, and we can feel his despair while he tries to plan for a way to save her life. Yet still the novel remains light, not depressing. Padillo brings in a motley group of agents to help in the rescue effort and of course there are the usual twists and turns and double crosses.