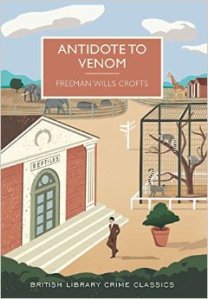 I haven’t had much luck with Freeman Wills Crofts previously, finding his Inspector French novels a little turgid (sorry, FWC fans). So I was fairly surprised to find people strongly recommending the new British Library reprint Antidote to Venom. I’m glad I believed them because it’s one of my favourite reads of the year so far.

There are three things going on in Antidote, which seems to be one of those books in which the author has set themselves a series of challenges:

1. An inverted mystery, in which we see the protagonist building himself up to committing murder, and in fact witness his crimes. But some mystery still remains, leading on to…

2. A straight-forward police investigation, in which the stolid Inspector French uses a mix of intuition and procedure to uncover the crime. At the same time we see…

3. The criminal’s moral journey from greed to murder to regret.

Taking the inverted mystery first. George Surridge, looking ‘tired and worried and old for his age’, is Director of the prestigious Birmington Zoo, a job which gives him much professional satisfaction but not quite enough money. His wife Clarissa is a spendthrift, George has fallen in with a gambling set, and his wealthy aunt Lucy is clinging tenaciously to life and his inheritance. Then along comes the slim and attentive widow Nancy Weymore, only needing someone to take care of her, and George suddenly finds his need for money overwhelming everything else.

‘[The idea of murder] grew, not less hateful, but more familiar. He toyed with the idea, wondering how such a thing might be done, then again assured himself with vehemence that nothing in heaven or earth would ever induce him to be guilty of such a hideous crime.’

Discussions of Crofts often cite his respect for professionalism and love of know-how. Surridge is a thorough professional and a capable zoo administrator, giving Crofts the chance to display his grasp of minutiae: The difficulties of finding a specialist in monkey flu, transporting elephants from Liverpool to Birmingham, maintaining a good number of visitors. Surridge is conscious of the value of his work and of its importance to him as an individual. But he is also a human being, resentful of his financial position and bored with his wife. His romance on the side feels as though Crofts doesn’t quite know how passion works (and there is no way that Nancy is anything more than a cardboard-cutout woman). However, Crofts is good on the logistical details of how George cheats on Clarissa – involving much driving of a hired ‘N.J.Gnat’ up and down Orlop Hill. I just get the feeling Crofts doesn’t want to think too much about what the illicitly happy couple might actually be doing.

Aside from that, the build-up to murder is very convincing, very realistic, and well paced. Poor old George keeps digging himself further into trouble.

The crime itself? The murder weapon is a three-foot one-inch female Russell’s viper, but how the murder occurs is a true mystery. In fact even George doesn’t know, which helps him come through his dealings with the police.

‘In one way it had been unexpectedly easy. It had not been hard to show surprise, because he had been surprised. He had no difficulty in exhibiting horror, because he felt horror. He could ask for details with an appearance of ignorance, because he was ignorant.’

Crofts cleverly hands us an inverted mystery in which the main character doesn’t quite know how the murder is committed, which is a fairly impressive feat of sleight-of-hand. It also means that the reader is in the dark about the mechanism of the crime, which is where Crofts specialises. His series character Inspector French beavers away combining a few shreds of evidence into a case.

During the investigation George is on tenterhooks – he has no idea (nor do we) if the police will turn up a clue which will lead back to him, and there is very little he can do to prevent that happening.

Antidote to Venom is also interesting for its depiction of George’s moral journey. Misdemeanour leads to crime, leads to guilt and a sense of impending doom, leads to confession – the ‘antidote to venom’.

‘George at last realised the nature of the weight which was pressing him down. It was the knowledge of what he had done, and of why he had done it. He wondered whether he had gained or lost over the venture.’

This progression feels convenient and more than a little Victorian to a modern reader, and probably did in 1938, but Crofts was a devout Christian and this side of the story obviously meant a lot to him. He said the book was ‘an effort to tell a story of crime positively’, and in a way there is a happy ending for poor old George.

Anyway, this one comes with a whole-hearted recommendation. A lot of fun to read and a worthy addition to your Golden Age library.

Masters of the Humdrum Mystery: Author Curtis Evans cites several deplorable habits in Crofts’ writing, including diversions into unconvincing working-class dialects, travelogue, and ‘a lack of perception of the emotional bases of darker human behaviour’. However, he values Crofts’ commitment to plotting (the former railway engineer became a master of the timetable mystery) and argues he has additional interest as a religious writer. Crofts was a disciple of moral rearmament in the 1930s, and his stories reflect this.

Pretty Sinister Books: I always read author notes and prefaces. If I didn’t I would never have known that Antidote to Venom (1938) was Crofts’ “two-fold experiment” in crime fiction. In his own words “…it is an attempt to combine the direct and inverted types of detective story and second, an effort to tell a story of crime positively.” Curious that second part, don’t you think? I think he succeeds even if it comes about in the most manipulative fashion.

At the Scene of the Crime: My only complaint about this book is that its careful pacing is suddenly accelerated towards the end. As soon as French gets on the right track, everything falls into place so quickly that I almost got whiplash. In some ways, the ending smacks of deus ex machina,especially George’s spiritual experience towards the end. Freeman Wills Crofts was a devout Christian man, and this part of the book draws on that to bring the story to a close. I found myself wishing that it had happened in some other way, though, or that Crofts had taken more time to get to that stage. It just feels a little too contrived.