P. G. Wodehouse: The Swoop! or How Clarence Saved England

Posted on September 27, 2015 by pastoffences 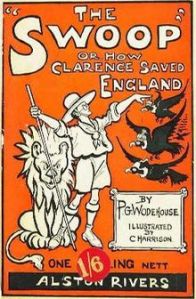 Clarence was a sturdy lad of some fourteen summers. He was neatly, but not gaudily, dressed in a flat-brimmed hat, a coloured handkerchief, a flannel shirt, a bunch of ribbons, a haversack, football shorts, brown boots, a whistle, and a hockey-stick. He was, in fact, one of General Baden-Powell’s Boy Scouts.
Scan him closely. Do not dismiss him with a passing glance; for you are looking at the Boy of Destiny, at Clarence MacAndrew Chugwater, who saved England.

P. G. Wodehouse isn’t an obvious candidate for a classic crime blog, but I thought I’d review The Swoop as a warning to the unwary.

Wodehouse usually successfully endeavoured to give satisfaction, however this one is a stinker.

The Swoop is a satire on invasion literature, an early subgenre of thriller which imagined Britain under the heel of various foreign powers. Invasion literature began with George Tomkyns Chesney’s The Battle of Dorking in 1871, which described an invasion of England by Germany. I’ve previously covered William Le Queux and Erskine Childers, both exponents of invasion literature. Le Queux’s 1906 novel The Invasion of 1910 is generally considered one of the classics.  Amusingly, he spent WWI trying to persuade the authorities to offer him special protection from apparently non-existent German threats. According to Wikipedia, ‘by 1914 the genre had amassed a corpus of over 400 books, many best-sellers, and a world-wide audience’.

Anyway, Wodehouse thought he’d have a go at one.

England is simultaneously invaded by a number of foes, including

The English barely notice the invasion, being too occupied (if you’ll forgive the pun) with cricket scores and their other national pastimes.

SURREY DOING BADLY GERMAN ARMY LANDS IN ENGLAND
Clarence flung the boy a halfpenny, tore a paper from his grasp, and scanned it eagerly. There was nothing to interest him in the body of the journal, but he found what he was looking for in the stop-press space. “Stop press news,” said the paper. “Fry not out, 104. Surrey 147 for 8. A German army landed in Essex this afternoon. Loamshire Handicap: Spring Chicken, 1; Salome, 2; Yip-i-addy, 3. Seven ran.”

After some in-fighting, the invaders are eventually repelled by a Boy Scout plot involving music halls.

There are some nice bits of Wodehouse prose, but the joke is done to death.

Taking it for all in all, the German gunners had simply been beautifying London. The Albert Hall, struck by a merciful shell, had come down with a run, and was now a heap of picturesque ruins; Whitefield’s Tabernacle was a charred mass; and the burning of the Royal Academy proved a great comfort to all. At a mass meeting in Trafalgar Square a hearty vote of thanks was passed, with acclamation, to Prince Otto.

Spookily, the next book I’ll review on here also covers a German invasion of Britain.

Graeme Shimmin: Le Queux: How One Crazy Spy Novelist Created MI5 and MI6: This is the astonishing story of how a prolific, hugely popular, but now almost forgotten spy novelist, William Le Queux, was responsible for the creation of Britain’s spy agencies.

13 Responses to P. G. Wodehouse: The Swoop! or How Clarence Saved England