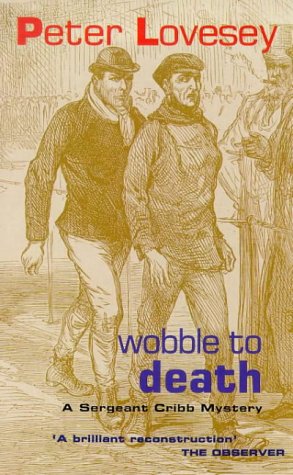 Wobble to Death is a Victorian history-mystery – one of those crime novels which is probably memorable more for its context than its mystery, but none the worse for that. The setting is pretty unique, and will probably be new to most readers. Lovesey tells us in a note that:

Six-day ‘Go As You Please Contests’ – or ‘Wobbles’ – were instituted by Sir John Astley in March 1878, and became very popular on both sides of the Atlantic in the eighties.

A long-distance walking competition held over several days, in which the athletes – ‘pedestrians’ – frequently walked, ran or limped 100 miles a day. A very ugly endurance race.

This Wobble is something of a novelty, as it is being held inside the Agricultural Hall in North London, a vast, draughty and freezing cold building. The track is covered with manure from the cattle who frequently occupy the hall (see above). Competition is fierce, as the winner will receive a purse worth £500. The contestants walk in circuits, leading to much pushing and shoving. Dirty tricks such as putting walnuts in an opponent’s shoe, or taking a ‘tonic’ are commonplace.

The favourites in the Wobble are Chadwick, an arrogant ex-Guards Captain who brings his own tent to the event. His close competitor Darrell is a professional athlete. Alongst others on the track are O’Flaherty the ‘Dublin Stag’, and rank outsider Dr Francis Mostyn-Smith.

When Darrell dies after the first day, the initial diagnosis is tetanus picked up from walking with blistered feet through manure. However, that diagnosis is soon upgraded to strychnine poisoning, and fingers are pointed at his trainer (strychnine being a common ingredient in ‘tonics’).

The police are called in. Sergeant Cribb and Constable Thackeray, who go on to star in seven more novels, are a classic of the bossy detective and downtrodden assistant trope. The shrewd but unpopular Sergeant Cribb (he never manages to get a promotion) has cultivated enormously bushy ‘Piccadilly Weepers’ to compensate for an overlong nose. He lords it over his long-suffering Constable, taking time off to get a decent night’s sleep and bagging all the plum jobs for himself. Poor Thackeray, a burly copper, even has to suffer the indignity of interrogating the contestants on the track, struggling to keep pace as they charge along.

A fascinating look at an obscure and eccentric corner of Victorian life, written with dry humour. Not quite up to the standard of Lovesey’s masterpiece The False Inspector Dew, but definitely worth your time.