Posted on February 1, 2016 by pastoffences

Every month on Past Offences we review crime books and films from a chosen year (it’s called Crimes of the Century), and in January we were looking at 1950.

Bev led the pack with Hunt with the Hounds by Mignon G. Eberhart, but found it disappointed in its ambition to be a romantic suspense story.

It’s set against the backdrop of the Virginia fox-hunting country (who knew fox-hunting was a thing anywhere but England) […] Eberhart tries very hard to build up suspense and atmosphere in this one. But, for me, it just fell flat and doesn’t represent her best work.

Bev followed up with Helen Reilly’s Murder at Arroways, the 18th in her Inspector McKee series, altogether a more successful read:

The pacing of the novel is nearly pitch-perfect and the suspense is also carried off very well. Classic mystery fans will be a bit disappointed in the clueing–or lack thereof. It would be difficult to identify the culprit strictly by clues in the story. One might have ideas that point in the right direction, but they would be more intuitive than deductive. Still, it is a fine story and well-told.

And Bev finished her hat-trick with Herbert Brean’s Hardly a Man is Now Alive, in which photographer Reynold Frame gets mixed up in a mystery harking back to the Revolutionary War.

Readers who are looking for a fun, cozy-style mystery with a historical back drop will surely enjoy this one. Brean provides interesting historical details–backed up by facts and fully explained in footnotes. A nice peek at the beginning of the Revolutionary War and solid mystery all in one.

Jose Ignacio at A Crime is Afoot looked at Patricia Highsmith’s classic tale of murder-swapsies, Strangers on a Train.

I weighed in saying much the same kind of thing – I think it’s an all-time classic, and I even remember enjoying the Danny DeVito rip-off Throw Momma from the Train…

However, Col’s Criminal Library will not be including Strangers on a Train on its recommended reading shelf.

Each time I put the book down, I felt absolutely exhausted. Tough writing, tough to read, she forces you to pay attention and concentrate on every word. 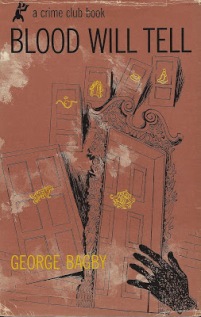 The story is told almost entirely via interviews at the Basingstoke apartment building… Much of the story depends on the way the building is designed.  The telling of the story is entertaining, but I wanted more variety. Either spending more time outside of the building. Or more reporting on police procedures.

1950 was private eye time, of course. Kerrie at Mysteries in Paradise took a dip in Ross Macdonald’s The Drowning Pool, a Lew Archer story which kicks off with a poison pen letter and soon escalates into:

a gripping tale of adultery, jealousy, murder and lies.

Brad at ahsweetmysteryblog points out;

Turns out that 1950 was a great year for film noir. Wikipedia lists fifty-four titles, including In a Lonely Place, No Way Out, Gun Crazy, and Where the Sidewalk Ends.

Both center around two doomed heroes, who are, quite literally, dead at the start. Frank Bigelow, the protagonist of D.O.A., is one of the walking dead, a man who has been mysteriously poisoned and has only 24 hours to live. [In Sunset Boulevard] we come to realize that the dead man himself – a failed screenwriter named Joe Gillis – is narrating the details of his own murder.

Over to the UK now. Kate at crossexaminingcrime Joanna Cannan’s Murder Included:

the first book I have read where class has such a pervasive and powerful role in the direction of the investigation […] Price comes into the case disliking the area preferring council houses to gentry land lords and thinks the local inhabitants are ‘medieval’ and ‘bumpkins’. He even makes a gaff suggesting to Treadwell that there must be lots of old women around the area who know about plants, botany and herbs, even suggesting the woman at the gatehouse could be such a person. Awkwardly this person turns out to Treadwell’s great aunt, an ex-lady maid who in her job visited many embassies.

at A Crime is Afoot tried his first Edmund Crispin this month, Frequent Hearses (the one on a film set):

I wonder if this was a good decision. From what I know now it’s probably one of the weakest of  his books, and I would only recommend it to those of his fans wishing to complete all his novels and collections of short stories. In any case I have not given up yet, and I’m planning to read other of his books.

this is set for some reason in 1938, so chronologically before the war-set Merrivales. So all we know about post-war Britain is that Carr didn’t want to write about it. 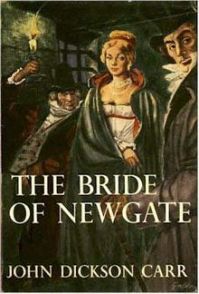 To prove that point, here’s some more Carr from 1950 – The Bride of Newgate – at The Invisible Event,

You start off with old-world references to turnkeys and Prinny and Boney, with spoken slang rippling thew-like across the narrative so you’re almost bent close to the page as if deciphering his calligraphy, as if pulled in inexorably by a hand at your throat.  Candle-lit rooms are described by the backs of the men in them leaning out of the window, a crowd tosses a dead cat amongst themselves for entertainment.

I wrote an entire essay about early-modern cat-throwing once. Honestly, it was quite the thing in the old days.

Staying with The Invisible Event, we moved on to Norman Berrow’s The Footprints of Satan, and a story inspired by a strange event in Victorian England:

far from simply devising his own impossibility, he takes an unexplained one from real life, turns it to his own fictional purposes and then explains it away beautifully. Both the foreword and the plot here make reference to an incident from 1855 and reported in no less august a publication than The Times in which a trail of hoof-marks appeared in the snow as if from a cloven-footed creature walking on its hind legs.

To round us off, there were three reviews of Agatha Christie’s village mystery A Murder is Announced, which I decided was probably as 1950 a read as it was possible to find – very much a portrait of an era.

Moira at Clothes in Books agreed in her review of A Murder is Announced:

People think she’s writing about a ‘cosy’ village, but her point in this one is that WW2 has shaken everything up, nothing is as it was, and nothing is as it seems – for example, these law-abiding people are all prepared to operate on the black market.

Jose Ignacio, in his review of A Murder is Announced, pointed out that:

This is one of Christie’s most successful conjuring tricks, the physical mechanics actually tested out on her own neighbours in Wallingford, and as usual some of the best, and in retrospect, most infuriating clues are verbal: in this case, you could even say typographical.

So that’s 1950 – quite a varied year and at least two of the best mysteries I’ve read. Thanks everyone! In February we will be reading 1933… sign up if you want to join in.