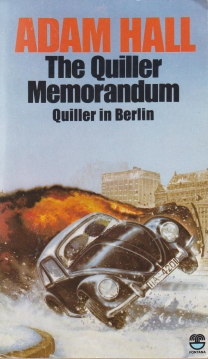 We are alone. We are committed to the tenets of individual combat and there is no help for him who falls. Save a life and we save a man who will later watch us through the cross-hairs and squeeze the trigger if he gets the orders or the chance. It’s no go.
The car burned and the man screamed and I sat watching.
We are not gentlemen.

The Berlin Memorandum, renamed The Quiller Memorandum, was the first of 19 spy adventures published between 1965 and 1996 by Adam Hall (aka Elleston Trevor).

Quiller is some kind of secret agent (we’re not entirely sure what kind, or what organisation pays his wages), ‘a known authority on memory, sleep-mechanism, the personality patterns of suicide, fast-driving techniques and ballistics’. As the book opens, he is persuaded against his better judgement to go after a Nazi revivalist movement named Phönix.

The book follows his desperate attempts to locate Phönix’s Berlin headquarters whilst evading Nazi agents (except when he is allowing himself to be captured and interrogated, which is apparently a good idea).

Quiller narrates the book, very much from inside his own head in a kind of espionage-speak stream of consciousness, full of the sort of tradecraft jargon that makes thrillers seem so real – flushing tags, doubling, red zone, on the hush.

Fifteen stairs, a mezzanine, ten more stairs. This data was filed mentally with the rest: six average paces from the plantain to the gates, gate twelve feet high and locked back with ball-levers, twenty-seven paces from the gates to the curving steps, reasonable shrub cover, two balconies on the face of the building… nineteen paces from the double doors to the staircase… so on.

The story divides roughly equally into interrogations, fights, chases, and hard-man philosophy (sample: ‘A gun is as clumsy as a woman’s handbag’). The interrogations are probably the most interesting part of the narrative, as we follow the ups and downs of his emotional and mental state under various truth serums as well as physical and psychological techniques.

Throughout, we’re reading his mind more than we’re reading the book. Occasionally the narrative gets so staccato that it’s almost like listening to a super-computer in a retro sci-fi film.

The horizon line was unbroken from roof to roof.
In ten minutes I had re-observed. Nil.
Known considerations had ceased.
Eliminate two considerations.

In this book’s favour, it’s tightly written and stylistically interesting, unremitting in terms of action, and has some great set-pieces. However, in the final analysis, Quiller just wasn’t for me. I can never muster much sympathy for these super-efficient super-spies. They’re just too full of themselves.

For bonus points, I am actually writing this post in Berlin.

The Unofficial Quiller Website: This is an espionage novel of a new kind. Adam Hall is a master of chilling psychology, and brings authority to his clinical portrayal of move and counter-move, of flight and murder in the Berlin streets, and of the secret war waged in loneliness between les espions.

Existential Ennui: In his own way, Quiller is as weird a creation as [Richard Stark’s] Parker Obviously there are major differences between the two – Parker is a career criminal; Quiller is a secret agent – but there are also parallels: the single name (we never learn in either case whether “Parker” or “Quiller” is a surname or a pseudonym); the single-minded dedication to a cause to the exclusion of pretty much everything else (romance, home comforts… er, hobbies…); the machine-like nature of each protagonist. Indeed, based on the evidence of The Berlin Memorandum, Quiller is as much an espionage automaton as Parker is a heisting one.