That was the beauty of Campion; one never knew where he was going to turn up next – at the Third Levée or swinging from a chandelier.

The more perceptive amongst you will be able to judge from the cover why the 1990 dramatisation of Sweet Danger was one of my favourites of the Campion adaptations. Sadly things never worked out for me with Lady Amanda, but I’m man enough to review the book without regrets clouding my judgement.

Most of the Allingham reviews on here are of the serious, postwar Campion (see Hide My Eyes, The China Governess, The Tiger in the Smoke, Cargo of Eagles). But Sweet Danger is Campion at the end of his original silly-ass ‘universal uncle’ career.

It opens with his old chum Guffy Randall spotting Campion at a hotel on the French Riviera, pretending to be a minor Balkan monarch on his holidays. It turns out that Campion and two more chums, Dicky Farquharson and Jonathan Eager-Wright, are on a secret mission for the British Government. The tiny Kingdom of Averna on the Adriatic Coast has, after a minor earthquake, gained some strategic value as a port. Averna’s rightful heirs are British, but the lost proofs of their ownership need to be found.

The trail leads the chums to the picturesque Suffolk village of Pontisbright and the charming Fitton family, of whom Amanda Fitton is the most charming, ‘at a stage of physical perfection seldom attained at any age’ and possessor of hair of a ‘blazing, flaming, and yet subtle colour which is as rare a it is beautiful’.

The Fittons are the true heirs of Averna, and have attracted the attention of Brett Savanake, one of the ruthless capitalist magnates that Allingham seemed to dislike so much. Campion’s gang have to complete a treasure hunt for the three proofs that the Fittons own Averna, with only a cryptic poem as clue. 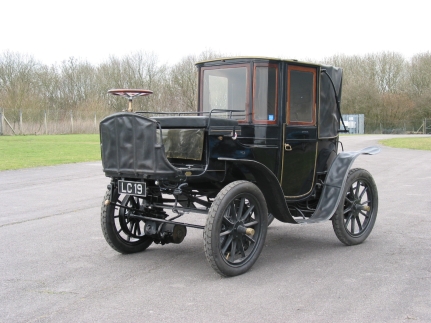 A Krieger electric brougham, built in 1904.

I’m reading Sweet Danger for Crimes of the Century, which this month is looking at 1933. So how 1933 is Sweet Danger? Not very – in fact it seems rather timeless, and deliberately so. The wattle-and-daub fifteenth-century mill at Pontisbright with an ancient electric brougham parked in front, the local doctor practising an ancient brand of witchcraft in his front parlour, the Rupert-of-Hentzau storyline with a baddie who is a captain of industry rather than a captain in the Carpathian guards. There is even a glimpse of the future to be had in Brett Savanake’s offices at Xenophon House in London.

Here was a shot from one of the more fanciful German films. The clean lines of glass walls were interrupted by mysterious machines. A gigantic desk which sprouted bulbs, switches, telephones with televisor attachments, and which must have contained, Mr Campion imagined, enough equipment to befuddle any ordinary office…

Meanwhile, Campion and Amanda form the effective partnership which eventually leads to their marriage. I guess one 1933 trait is that the difference in their ages isn’t mentioned as an issue, although Amanda does want to grow up a bit first.

All told, a charming romp with not many depths to plumb. Roger Johnson writing for the Margery Allingham Society mentions that:

We owe this fifth instalment in the Campion saga, as Julia Thorogood explains, to Margery Allingham’s American publishers. Sales of the more cerebral detective-story Police at the Funeral had been unsatisfactory, and Doubleday asked for another ‘plum pudding’. She was already at work on what should have been the next Campion novel, Death of a Ghost,but started on Sweet Danger without noticeable reluctance. Much later she said, perhaps disingenuously: ‘This purely “right-hand” tale was written as a private celebration because I had achieved an ambition and got back to the countryside where I belonged after ten years of exile. I like to think that a trace of the march hare ecstasy that I felt all that enchanted summer had been caught in it.’