H. R. F. Keating: The Murder of the Maharajah 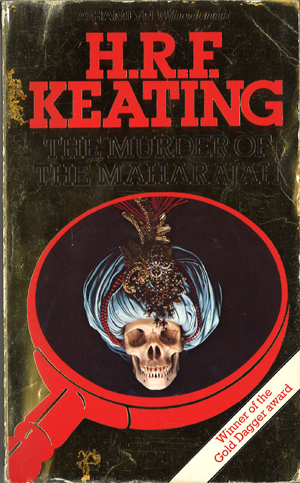 ‘Good lad. Remember, we’re here to see that things are done in this country the right way. It isn’t easy. We wouldn’t have been put here if it was. So we’ve got to do our best, always. All right?’

H. R. F. Keating was an author and critic probably best known for the creation of inspector Ghote of the Bombay Police, a long-suffering but dogged investigator. Keating famously wrote the first Ghote novel The Perfect Murder without even visiting India. The Murder of the Maharajah predates the Ghote novels, taking place in 1930, during the British Raj.

The Maharajah of Bhopore is a giant of a man, crafty as well as strong, a dangerous crack shot possessed of an equally dangerous childish sense of humour, and absolute ruler of a large territory (provided that the British don’t get too annoyed with him).

His sprawling palace includes an elephant pen and a roller-skating rink, and employs over 1,100 staff, including someone to polish the brass plates commemorating who shot which tiger in the trophy room, a chutney wallah (who looks after the room full of chutneys, obviously), and someone else to clean the unused collection of pinball machines in the pinball-machine room.

The palace is full of intrigue. The Maharajah’s closest advisor, Sir Akhtar Ali, is falling out of favour. His eldest son, the Rajkumar Porgy, is also in trouble on account of wishing to marry his unsuitable English mistress Miss Dolly Battle. An American called Joe Lloyd has built Bhopore an enormous dam, but is furious that the Maharajah is refusing to use to its full potential. Another American, Henry Morton III, is lobbying hard for the right to build a factory in Bhopore, far away from the labor unions back home. Sir Arthur Pendeverel, the English Resident ‘advising’ Bhopore, is concerned with monitoring and hopefully mitigating the Maharajah’s excesses.

The action kicks off on April Fool’s Day and an excruciating series of practical jokes culminating in a deeply embarrassing dinner at the palace (during which the Maharajah’s A.D.C. is falsely accused of trying to poison him). At a shooting party the next morning, the beautiful scenery is shattered by the Maharajah’s gun exploding, killing him instantly.

The police are summoned. D.S.P. Howard has never been to England and is therefore not quite the ticket (‘Not One of Us’), but nonetheless he is a respected investigator and he is brought in by Sir Arthur Pendeverel to resolve the murder of the Maharajah before the Viceroy of India is forced to cancel his state visit to Bhopore.

The mystery is a closed circle of suspects and D.S.P. Howard has trouble breaking their alibis, eventually resorting to a recreation of the excruciating dinner party to unmask the killer. There is a nice bit of misdirection which will probably fool Christie fans before the culprit is revealed.

A humorous story with a strong setting and a satisfying mystery.

6 Responses to H. R. F. Keating: The Murder of the Maharajah