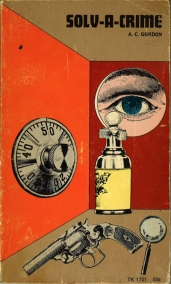 The last Solv-a-Crime challenge was fun, so here’s another poser for the Bank Holiday.

The Case of the Room-mate’s Remains

You drive to an old boardinghouse near the university and knock on the door of a room on the second floor. Jerry Morgan, who lets you in, phoned you 20 minutes ago. His room-mate, Tom Hart, lies on the floor, with a switchblade sticking out of his chest.

You check the body. Hart has obviously been dead for several hours. Near the body is a chair on which several raincoats have been carelessly thrown. In the pockets of the topmost raincoat, you find a .38 caliber gun.

You examine the other raincoat and find only a pair of leather gloves and an empty liquor flask. You ask Morgan for his story.

‘I sacked out early last night,’ he says. ‘About 10:30, I guess, and I fell asleep right away. Then I was suddenly awakened. All the lights were on, and Tom was stumbling around the room. I hadn’t seen him all evening, but he must’ve been doing some heavy drinking. He was pretty far gone.

‘Well, I told him to take it easy and go to bed. After a lot of fumbling, he managed to get his raincoat off and throw it on the chair. Then he fell into bed. I fell asleep again too. When I woke up this morning about seven, there he was on the floor – with that knife stuck in him!

‘Somebody must’ve come in during the night – maybe one of those gambler friends of his. You know, he told me once that he’d been losing a lot, and he gave out some IOUs that he didn’t think he could make good. Anyway, as soon as I recovered from the shock, I phoned you.’

‘Did you disturb or touch anything here before or after phoning me?’ you ask.

‘Oh no. I’ve read enough detective stories to know better than to do that.’

‘In fact,’ you say, ‘I think you know more about this murder than you’ve told me. I want you to start telling me the truth!’

What part of Morgan’s story has made you suspicious?

Past Offences exists to review classic crime and mystery books, with ‘classic’ meaning books originally published before 1987.
View all posts by pastoffences →
Gallery | This entry was posted in Information Received and tagged A. C. Gordon, Solv-a-Crime. Bookmark the permalink.