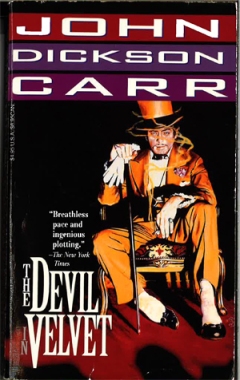 Cool cover, but is this supposed to be seventeenth-century clothing?

I had been long anticipating the moment when my reading of the CWA’s top 100 crime and mystery books eventually brought me to The Devil in Velvet. It’s going to take a lot to beat the oddity of this book’s set-up.

Professor Nicholas Fenton makes a deal with the Devil in order to be sent back in time to occupy the body of his namesake, Restoration rake Nick Fenton. The Professor has a theory about the murder of Fenton’s wife Lydia, and wants to see if he is right. So that’s time travel and the Devil covered in chapter one. On to the main event…

Fenton travels back in time expressly to solve a mystery which has evaded his historians’ research skills. Who exactly poisoned the other Fenton’s wife, and how? But as soon as he gets there, he finds there are complications. The old Fenton has more than one lady on the go, and the new Fenton has to pick his favourite in a hurry (by the way, I think Carr may have had a thing for seventeenth-century wenches – it’s slightly painful to read). New Fenton also finds old Fenton is embroiled in a political struggle between one bunch of courtiers and another bunch of courtiers (this is why I never made it as a historian – and the Restoration was definitely ‘my period’ as well).

Nicholas Fenton (the historian, not the cavalier) is an expert in the minutiae of daily life, and an acknowledged master of seventeenth-century speech patterns. It might not make him an interesting first date, but it does mean he manages to integrate into his new life in a matter of a few hours. Those closest to the real Fenton develop a mild suspicion that something is wrong, but that soon passes. Carr has also mastered his speech patterns and shares his mastery with us liberally. Here’s some of chapter five:

‘Crafty as a daggle-gown at Westminster Hall.’

‘Your mind, good fellow, is more nauseous than Snow Hill in August.’

‘Scratch me, but there’s a fine wench!’

Carr was clearly a details man, and in his notes at the end of the book he speaks fondly of his map of London covering an entire wall. His research really shines through in his dense descriptions of the sights and sounds of Restoration London. He is especially strong on food, drink, fencing and clothes. Fenton’s bumbling friend George wears a purple coat and white-cartoon waistcoat with gold buttons (George is careful to wipe his greasy hands on the back of his waistcoat after eating, so that the strains won’t show). An Alsatian bully wears a tattered coat tightly fastened with pewter buttons and rusty greenish breeches laced to rusty greenish stockings.

But honestly, with all the atmosphere, all the detail, all the politics, and all the Restorationese, I lost track of what the hell was going on quite early, and I never quite got back on track. Nor did I care particularly. I didn’t like either of the two Fentons, the mystery was almost an afterthought tacked on to a deep-dive into seventeenth-century life, and I wasn’t terrifically motivated to pay closer attention.

For me, I think the core problem in Devil is that it sounds like it should be a post-modern cross-genre romp, but it doesn’t quite make it. I’m sure Carr could have written a funnier book, and I wish he had gone for that instead of seriousness.

Vintage Pop Fictions: The book is a combination of a clever murder mystery, a strange love story, a political thriller and an enjoyable adventure romp, with some fascinating insights into daily life in the 17th century to add extra interest and spice.  Considering that it was written in the early 1950s it’s also surprisingly frank in dealing with matters of sex. In some ways it has a very modern feel, somewhat akin to the wonderful genre-bending alternative history fantasy novels of writers like Tim Powers and Mary Gentle. In fact it’s a book I can recommend to fantasy and horror fans as well as crime fiction fans. An unusual but very entertaining novel.

Dust and Corruption: It’s a rip-roaring read, and with some genuine surprises. The final solution to the mystery was a real shock for me, but it made absolute sense. I loved the introduction of another time-traveler, something you rarely get in time-travel stories. The supernatural elements are well handled; Satan is given both charm and repellence, and there’s hints of the Other Power making Its presence known in the character’s lives as well.

11 Responses to John Dickson Carr: The Devil in Velvet