Bodies from the Library 2016 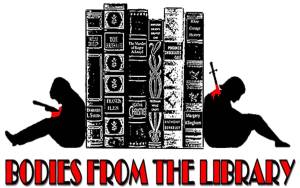 It seems like only a few weeks since I reported from Bodies from the Library at the British Library, the inspirational first gathering of Golden Age mystery fans. However, a year has gone by, and today I was down in London for a rematch. This year’s event was a little more focused on specific authors, which yielded loads of interesting nuggets of Golden Age goodness.

Anthony Berkeley Cox (aka Francis Iles)
Tony Medawar spoke about the career of this innovative novelist, who did his best to challenge the established tropes of mystery fiction.

Ngaio Marsh*
In her talk on Marsh, novelist and theatre director Stella Duffy (a brand-new OBE) looked at the language and staging of Marsh’s New Zealand stories, and actually made me want to read more of this author. Special mention for the brilliant colour coordination on Duffy’s slides. To be fair, I think only I noticed this.

See below for some Ngaio Marsh book news…

Josephine Tey
Tey’s biographer, Jennie Morag Henderson (see our conversation here), spoke about the life of his novelist and playwright.

Philip Macdonald vs Georgette Heyer
L. C. Tyler and Susan Moody spoke in favour of these authors being accepted into the Detection Club post mortem.

Some forthcoming books to look out for:

Joining the growing ranks of modern novelists completing unfinished stories by the Queens of Crime is Stella Duffy, who will be taking on a  Ngaio Marsh story scribbled on the back of an Antony and Cleopatra script.

All of Susan Moody‘s Penny Wanawake stories, starting with Penny Black, are to be published by event organiser Mike Linane. More of this anon.

Gil North‘s 1960s stories featuring Sergeant Cluff – ‘like Maigret transplanted to the Yorkshire Moors’ will be coming from the British Library.

Anthony Berkeley‘s all-time classic The Poisoned Chocolates Case (the one with six solutions) will be published by the British Library later this year – with not only Christianna Brand’s seventh solution (previously available only in a US edition), but also an 8th solution by Martin Edwards.

Martin Edwards’ The Story of Crime Fiction in 100 Books, a companion-piece to the British Library’s publishing programme.

The University of the Highlands and Islands is planning a Josephine Tey event in 2017.

As with last year’s Bodies, this was excellent value for money, and it was great spending the day with so many well-informed people (including Kate, JJ and the Puzzle Doctor).

15 Responses to Bodies from the Library 2016