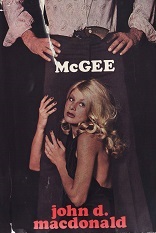 Travis McGee is a self-confessed beach bum, who lives on his boat The Busted Flush at Slip F-18, Bahia Mar, Lauderdale. ‘Instead of retiring at sixty, I’m taking it in chunks as I go along.’ He earns a living, when he needs to, as a ‘salvage consultant’, meaning helping people retrieve money or valuables that they can’t get back by legal means. It’s quite a niche profession but he gets by.

In The Deep Blue Good-by, he decides to help a girl called Cathy Kerr, ‘a sandy blonde with an English schoolboy haircut’, get back her father’s ill-gotten wartime loot from a man named Junior Allen, who seduced her before managing to find the treasure and take it away from her.

Junior Allen is no common-or-garden chancer. He is a deeply nasty piece of work, for whom wealth is only a means to inflict more of his vices on the defenceless. Travis quickly tracks him down to the home of Lois Atkinson, another of Allen’s conquests, driven half-mad by malnourishment in her luxury home.

‘I didn’t even feel revulsion towards him. Our think of him as a person. He was a force I had to accept […] It was easier to stay a little bit drunk.’

Allen is the nastiest villain I’ve come across recently and richly deserves his hunting-down by Travis. There’s a very well done horror-movie moment at the end which seems in keeping with his character.

Travis isn’t 100% good himself, although he’d like to be. In common with other noir heroes he does his best to play it straight, but is constantly letting himself down. In his case, it’s women that are his weak point – he seems to be unable to avoid them asking him to go to bed. You know how that is. And oh my God, McGee lives in an incredibly bitter world for someone who sleeps on a boat in Florida with a deep tan that’s hard to carry off in clothes, ‘beach bunnies’ at his beck and call, and nothing to do most of the time. I opened the review with his views on the modern world. Here he is, on bunnies:

They have been taught that if you are sunny, cheery, sincere, group-adjusted, popular, the world is yours, including barbecue pits, charge plates, diaper service, percale sheets, friends for dinner, washer-dryer combinations, colour slides of the kiddies on the home projector, and eternal whimsical romance. So they all come smiling and confident and unskilled into a technician’s world, and in a few years they learn that it is all going to be grinding and brutal and hateful and precarious.

And don’t even get him started on the future.

A man with a credit card is in hock to his own image of himself.
But these are the last remaining years of choice, In the stainless nurseries of the future, the feds will work their way through all the squawling pinkness tattooing a combination tax number and credit number of one wrist.

Still, he parks his nihilistic world-view long enough to trap Junior with the help of a newly-confident Lois Atkinson and some help from a counterfeit jeweller.

McGee is an engaging character and I’m looking forward to reading the next two stories in this anthology, and also the forthcoming film version starring Christian Bale and Rosamund Pike (although this has been delayed as Bale has injured his knee). James Mangold will direct the film, and the script is being written by Dennis Lehane and Scott Frank.