Cameron McCabe: The Face on the Cutting-Room Floor 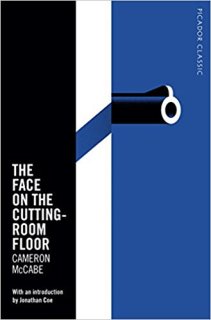 Now listen: you must cut out that Estella girl, every scene with her, I can’t have her, the picture’s too long. You must cut it down to seven thousand feet. I’ll send Robertson to help, and between the two of you you can do some juggling with your scissors and celluloid. You like it, don’t you? What you say?’ ‘It smells,’ I said.

In Bloody Murder, his overview of the crime fiction genre, Julian Symons calls The Face on the Cutting-Room Floor ‘the detective story to end all detective stories’. He goes further, calling it ‘a dazzling, and perhaps fortunately unrepeatable, box of tricks’. High praise, which made me very keen to read Cameron McCabe’s only mystery when I realised it qualified for this month’s Crimes of the Century.

In his foreword, Jonathan Coe says of McCabe (real name Ernest Borneman): ‘Borneman was a man of formidable intelligence who, like many a postmodern writer before and after him, loved the narrative energies of crime fiction while wanting to remain aloof from its conventions and simplicities.’

Our narrator, Cameron McCabe, is employed as a film editor by British and Allied Film Productions. At the opening of the book he is told to cut an aspiring young actress named Estella Lamare from a new film. This is hugely impractical, as Estelle played the third corner of a love triangle (and had done a very good job to boot). McCabe suspects the girl is being cut simply because she had refused the advances of the film’s director.

A few days later, Lamarre is found dead on the floor of the cutting-room. Two people confess to the crime immediately, and a third flees the country, but the police suspicions are directed at McCabe. And somewhere there is a film of the murder, recorded by a ground-breaking experimental camera which just happened to be set up in the cutting-room. If that can be found, all will be revealed – except of course we’er dealing with film editors…

The whole first part of the book feels jerky. There’s a lot of repetition. A character who has not been mentioned previously confesses to the crime. McCabe’s relationship to the police starts badly for no good reason. There’s way too much mansplaining about jazz. McCabe has an exasperating tone of voice and seems to want to alienate everybody. There’s a lot of repetition. Honestly, I almost gave the book up as a bad job, which is a very rare occurrence.

Then we hit the second part of the book, in which all is explained in a postmodern analysis of the first part, written by a character in the first part.

The pattern follows the plot: McCabe tells and retells the same story over and over again – not because he aims consciously at a literary pattern but because he is incapable of writing the story in any other way: the pattern of the story, with its constant repetitions which lead always back to the start, reflects the same vicious circle which we find in the plot and which we will later find for the third time in the style of writing which McCabe adopts to transmit plot and pattern of his book to his readers.

Instead of being ‘not yet intelligible’ for the reader, the implication has become simply un-intelligible.

So if I get that right, the first part is supposed to be bad. Good job, Ernest Borneman. The second part is also bad, by the way. Clever without being either witty or enlightening.

Jonathan Coe in the Guardian: Borneman [McCabe] was a man of formidable intelligence who, like many a postmodern writer before and after him, loved the narrative energies of crime fiction while wanting to remain aloof from its conventions and simplicities. This is the tension that explains, I think, the formal idiosyncrasies of The Face on the Cutting-Room Floor.

Past Offences exists to review classic crime and mystery books, with ‘classic’ meaning books originally published before 1987.
View all posts by pastoffences →
Gallery | This entry was posted in Witness Statements and tagged #1937book, 1937, Cameron McCabe, Crimes of the Century, Picador. Bookmark the permalink.

11 Responses to Cameron McCabe: The Face on the Cutting-Room Floor