Agatha Christie: And Then There Were None 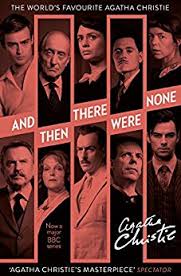 If this had been an old house, with creaking wood, and dark shadows, and heavily panelled walls, there might have been an eerie feeling. But this house was the essence of modernity. There were no dark corners – no possible sliding panels – it was flooded with electric light – everything was new and bright  and shining. There was nothing hidden in this house, nothing concealed. It had no atmosphere about it.
Somehow, that was the most frightening thing of all…

Some five years ago, I began a personal challenge on Past Offences: to read and review all one hundred of the CWA list of the best crime and mystery books. Well, today my challenge is complete. I’ve been saving this one for last, because: a) its ‘new’ title suits the end of the challenge perfectly, and b) using its ‘new’ title saves me using the original title, side-stepping an awkward issue. Phew.

The concept behind And Then There Were None is one of Agatha Christie’s finest. Ten strangers are gathered together on a remote island. Every one of them is hiding a guilty secret. And one by one they are knocked off by their host, the mysterious Mr U. N. Owen.

There are no heroes here, although some of the characters are more sympathetic than others. Mr Justice Wargrave is an old-style hanging judge, Vera Claythorne a governess who failed to save her young charge from drowning, Philip Lombard is an adventurer who has survived by abandoning others to die, Miss Brent is an elderly spinster with a heart of stone, General Macarthur sent a young officer to certain death, Dr Armstrong an alcoholic who no longer operates after an unfortunate incident, Tony Marston is a hit-and-run driver, Blore is a private detective who left the CID with his hands far from clean, and Mr and Mrs Rogers, the servants, benefited from the death of a previous employer.

Once they are gathered on the island, there’s a sense that Christie has all of her specimens arranged under a microscope and is dispassionately recording their movements.

When they had gone Tony Marston said:
‘Don’t know about you, sir, but I could do with a drink.’
Lombard said:
‘I agree.’
Tony said:
‘I’ll go and forage.’
He went out of the room.
He returned a second or two later.

It’s a  powerful microscope, because she also records their inner thoughts

Vera Claythorne, tired by a recent strenuous term at school, thought to herself – ‘Being a games mistress in a third-class school isn’t much of a catch… If only I could get a job at some decent school.’ And then with a cold feeling round her heart, she thought: ‘But I’m lucky to have even this. After all, people don’t like a Coroner’s Inquest.’

As they begin to die, the characters begin to search the house for the killer, before turning on one another. Their actions are recorded by Christie without comment until the climax.

This wasn’t my first reading of this classic, and the clues to the mystery are there once you know the solution, but it’s difficult to see how a newcomer could solve it. If you are that newcomer, you should of course read this immediately.

And Then There Were None
Agatha Christie
First published in the UK by Collins Crime Club in 1939
This edition: Harper; Masterpiece Ed edition (14 Oct. 2010)
ASIN: B0046H95RM
276 pages in print

7 Responses to Agatha Christie: And Then There Were None