‘…forced to wander through life being referred to vaguely’: #1977books

Every month on Past Offences a merry band of bloggers read and review the criminous output of a particular year. I call it Crimes of the Century, and this April we were looking at 1977. 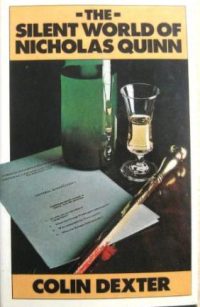 Fittingly enough, our first entry was for The Silent World of Nicholas Quinn by Colin Dexter, who sadly passed away at the beginning of the month (you can read his obituary at the Guardian).

According to Jose Ignacio at A Crime is Afoot, the third Inspector Morse novel is…

… well crafted and very amusing reading. A nice example of a classic Post-World War II detective novel. A professional policeman is in charge of the investigation, the story is plot driven but characters’ development plays an important role as well, and the storyline is much more realistic. The use of the language is much closer to reality and scenes of marked sexual nature are no longer hide. But nevertheless, the puzzle still remains the centrepiece around which revolves the whole plot.

Sergio at Tipping My Fedora also enjoyed The Silent World.

Dexter himself was deaf, was an inveterate crossword solver and setter and worked for an examination board much like the one in this novel, which may just give this cunningly plotted book the edge among his many fine whodunits. And it worked a treat when filmed for television too, which used all the plot and characters but came up with several neat refinements and added lots of clever new dialogue too. 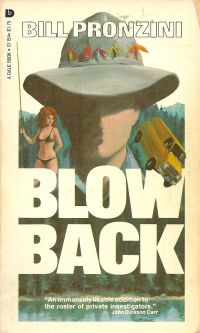 When it began I thought the most annoying thing about my choice would be that its protagonist’s name is never provided. I’m prepared to accept that Ralph Ellison or Graham Greene might have been making a deep or existentially interesting point when choosing this particular literary device but in virtually every other instance I’ve encountered it I am underwhelmed. Here too I was soon rolling my eyes at the clunky way a fictional nameless chap is forced to wander through life being referred to vaguely. But, unfortunately, this was far from the most annoying thing about the book. 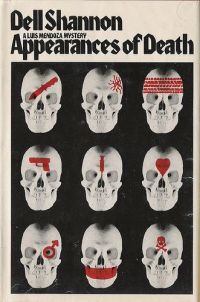 I’m not sure if the skull in this cover is supposed to be cross-eyed, but anyway Jason Half reviewed Dell Shannon’s Appearances of Death,

There are a lot of casualties in the book, and (as with reality) the police only step in after the damage has been done. Both the title and the skull-pocked dustjacket cover are truthful indicators of the story ahead. Appearances isn’t explicit the way that the thrillers of today tend to be … but there’s an honest depiction of the randomness and sheer quantity of real-world violence here that depresses me greatly. In Luis Mendoza’s Los Angeles, the days are measured by the number of deaths at the end of the day – from homicides, robberies gone bad, hit-and-runs, rapes turned deadly, and the occasional innocent fatal freeway crash. For me, a little (as in, one Dell Shannon book) goes a long way. 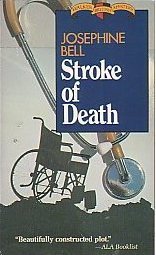 Bev at My Reader’s Block enjoyed Stroke of Death by Josephine Bell:

Old Mr. Lawrence is visited regularly at his home by various medical professionals to check on his progress after a stroke leaves him paralyzed on his right side and without the power of speech. His daughter-in-law is his primary caregiver–with his son Jim all-too-absent. When Lucy Summers is assigned to him for physiotherapy and first observes her patient (before he sees her), she becomes convinced that the old gentleman is being starved to death.

The Puzzle Doctor was not overly impressed with the mystery elements of Simon Brett’s Star Trap, but found the setting worked better.

This book would be a fascinating intriguing read if you were interested in the development from script to stage of a popular musical, the frustrations of the writer and director as their visions are eroded and the influence of a rising star exerting their power and influence. If that’s what you’re looking for, then this is the book for you. 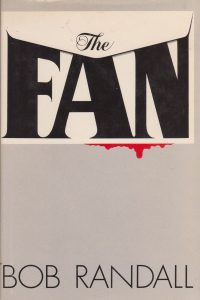 The Fan, Douglas, writes to Sally: letters which start out simply being quite keen, and then get more and more deranged. For the first half of the book Sally is unaware, and the reader follows her life as she rehearses, meets a new man, and continues her delightful relationship with her ex-husband, as above. Eventually she realizes something is badly wrong, and that Douglas is threatening her, but by this time it is hard to track him down, and the tension rises: the reader knows far more about Douglas than either Sally or the police. The final pages are terrifying.

Bernie tells his story in first person, and he is a very likable character. I don’t condone burglary, but he makes you forget that his chosen profession is illegal and harmful. And, of course, he only robs the rich. He has been described as the Robin Hood type, but since his goal is to support himself, I don’t see that as a fitting description… Not only is Bernie charming, but he runs into many interesting people as he endeavors to prove that he is not a murderer. The setting is New York, and I enjoyed this picture of New York in the 1970’s. 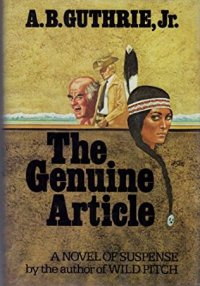 Scott at The Nick Carter and Carter Brown Blog moved west to read A. B. Guthrie’s The Genuine Article:

Not many people in Midbury liked Grimsley, a rancher with twenty thousand acres and five hundred head of cattle. Still, when Grimsley is found dead on his back doorstep with a mysterious gash on his head, Chief Chick Charleston and his crew have to use their detective skills to root out his killer. They are aided by Deputy Jason Beard, who, though he grew up in Midbury, has been away for two years at college. In their small Montana community, Charleston and Beard must conduct their investigations delicately, ignoring local prejudice, sifting through gossip and speculation, enduring the pressures of higher-ups, dealing with some less-than-savory characters, and eliciting information from those who would prefer not to talk. 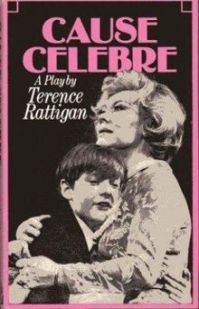 Jason Half brought us Terence Rattigan’s Cause Célèbre (his final script) which examines a true crime from 1934.

Sensational criminal trials are particularly enticing as areas of inspiration for writers. On the most obvious level, there is an instantly compelling dramatic event to act as anchor and characters who are under pressure and going through extreme emotions. There is also the benefit of dual narratives, each with their own attractions for a mystery-minded audience: the crime itself is a draw, while the corresponding legal trial generates a suspense of its own. Will those in the dock get away with murder? Will justice be served?

The action unfolds within a closed community around the people working at a forensic laboratory located in the fictional town of Chevisham, East Anglia. The story revolves around the investigation into the brutal murder of Dr Edwin Lorrimer, the Principal Scientific Officer in charge of the Biology Department at Hoggatt’s laboratory, someone very little appreciated by the rest of his colleagues and, consequently, almost all the staff becomes a potential suspect. Besides there’s the added difficulty that most of them are experts in some field of forensic discipline. And, last but not least, it is very well written, following the tradition and canon of the classic detective stories. 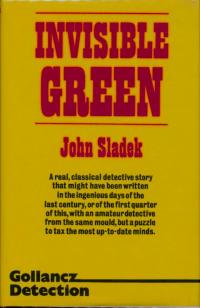 Neer at A Hot Cup of Pleasure John Sladek’s Invisible Green (I’m sorry Neer but I can’t seem to access your site tonight…).

Sladek outlines murders without means, motive or opportunity, and tackles his closed circle of suspects with verve. Enjoyable stuff.

Thank you to everyone who played, and to everyone who has contributed over the past years. Crimes of the Century will be taking a short holiday, but keep your eyes peeled for its return later in the year.

13 Responses to ‘…forced to wander through life being referred to vaguely’: #1977books