Philip Van Doren Stern: The Case of the Corpse in the Blind Alley 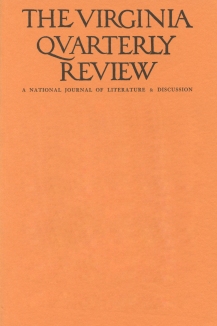 Casting around for something to read for this month’s Crimes of the Century, which is looking at 1941, I came across Philip Van Doren Stern’s article ‘The Case of the Corpse in the Blind Alley’ in VQR Online, the digitised archive of literary journal The Virginia Quarterly Review.

Anyway, PVDS, as I’ll be calling him, certainly knew how to stir up the old hornet’s nest. Check out some of these beauties…

Whatever artistic possibilities the detective story had were realized at its birth.

There is a simple test which can be used to judge a mystery story. Put yourself in the place of the murderer. Then ask whether you would go about killing a man in the way indicated in the story under consideration. Would you put bacteria-infected cheese mites in the Stilton the butler is about to serve to the gentleman you want to slay? Would you transmit your instructions tattooed in ideographs on the posterior of a Chinese orphan? Of course you would not, and thus you immediately know the story is trash.

To the modern reader who is honest with himself and not overawed by reputation, the Sherlock Holmes detective stories, great as they are, are beginning to take on a slightly antiquated flavor. Poe’s tales of ratiocination are period pieces in many respects, but their artistry saves them from seeming dated.

(By the way PVDS knew his Poe. As a historian and editor he put together the edition of Poe which became the standard anthology for decades.)

There is no reason why a tale concerning itself with the most soul-racking deed a human being can undertake should be a silly, mechanically contrived affair. The writer of murder mysteries holds high cards in his hand; if he does not know how to play them, that does not lessen their value.

Interestingly, Wikipedia says that PVDS published a mystery, The Case of The Thing in the Brook, under the pseudonym Peter Storme in 1941. Mystery*File says: ‘not a book anyone should seek out actively — it is not particularly well written and the characters are cardboard’. #justsaying

Anyway, PVDS eventually gets around to bloggers. Sort of. Even though he hadn’t even heard of blogs. If you’re a blogger, look away now…

Investigation of the whole situation surrounding the writing, publishing, selling, and reviewing of mysteries reveals one little-noticed fact: the mystery story is at a standstill because it is being written for a purely professional audience.

Around each one of the many rental libraries scattered across the country is a small but determined group of readers—most of them men—who devour almost every mystery story published. They take their daily dose of murder with the frenzied enthusiasm of a drug addict. They know all the tricks; they have followed all the detectives, erudite, dumb, exotically Oriental, depressingly homespun; they are familiar with all the ways a human being can be put to death […]

There is no use wasting time deploring the miserable lot of these devotees who spend their lives so vicariously and so futilely. The root of their devotion can probably be traced to an unhappy childhood, business worries, or a maladjusted sex life, rather than to a genuine interest in any kind of literature.

You can read the full piece at VQR Online. Meanwhile, why not take my quick quiz? 😉

6 Responses to Philip Van Doren Stern: The Case of the Corpse in the Blind Alley