Murder in the Library

Posted on February 1, 2013 by pastoffences

Earlier in the week I took advantage of being in London for work and visited the British Library’s Murder in the Library, an A-Z of Crime Fiction. This is a lovely little exhibition of crime books and ephemera that takes 20-30 minutes to take in properly. It runs until 12th May 2013 and is in the Folio Society Gallery (handy for the coffee shop). Entry is free.

Here is the A-Z in full…

A is for Agatha Christie, with a copy of the first appearance of Miss Marple story in the Royal Magazine in 1927.

Did you know? Agatha Christie refused to have images of Poirot on the dust jackets of her books.

B is for Better Known For. A small display of books by (mainly) sportsmen, including Pelé’s The World Cup Murders (written with one Herbert Rescinow, who I’m guessing did the heavy lifting).

C is for Clues, one of the more intriguing displays, with one of the ‘crime dossiers’ created by Dennis ‘The Devil Rides Out’ Wheatley, a publication which included real clues, including human hair, ticket stubs, and fag ends in little cellophane pockets. Also, the exhibition displays a modern equivalent in Aka Morchiladze’s Mr Deaxley’s Silent Box, a 2005 collection from Georgia.

D is for Dave Robicheaux.

E is for Ecclesiastical, featuring Lady Antonia Fraser’s notebook for the 1976 Quiet as a Nun – ‘jolly good fun’.

F is for Forensic.

G is for Golden Age, with a first edition of Trent’s Last Case (convincing me that my copy is not a first, as it lacks the lovely coloured frontispiece).

H is for Hardboiled, with The Maltese Falcon‘s first appearance in Black Mask, and Chandler’s 1946 collection The Finger Man, including his essay ‘The Simple Art of Murder’.

J is for Jigsaw, another lovely display with Walter Eberhart’s 1933 The Jig-Saw Puzzle Murder, complete with real puzzle. 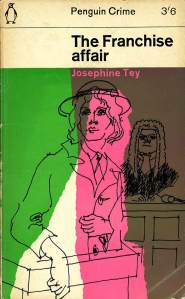 My copy of The Franchise Affair. The copy in the British Library lacks the pink wash, for some reason

K is for Kidnap, putting Josephine Tey’s The Franchise Affair up against the 1754 PROCEEDINGS AGAINST ELIZABETH CANNING, the kidnap case which inspired Tey.

L is for Locked Rooms, including a lovely copy of Clayton Rawson’s Death From a Top Hat, with a beautiful frontispiece: a photo of a model of the locked room in question.

M is for Mayhem Parva, with The Murders at Badger’s Drift, the first Midsomer Murder.

N is for Nordic Noir

O is for Oxford, and Inspector Morse.

P is for Police.

Q is for Queens of Crime, and includes an immaculate copy of Margery Allingham’s Mystery Mile.

R is for Railways, which includes John Gielgud’s working copy of the script of Murder on the Orient Express, including his elaborate doodles.

S is for Sherlock, and features Conan Doyle’s original manuscript of ‘The Adventure of the Retired Colourman’ – showing the great man had very very neat writing, with not much crossing out, and liked to write down right to the bottom of the page. 10/10.

T is for True Crime, with a copy of Who Committed the Road Murder? By a disciple of Edgar Poe (sic), the 1860 book on the case which inspired the more recent The Suspicions of Mr Whicher.

U is for Unsuitable Job and looks at female crime-fighters.

Did you know? ‘G’, the heroine of 1864’s The Female Detective, was not only the first female detective, but had no successor until the 1890s.

V is for Villains, Raffles and Ripley.

X is for Xenophobia, with a focus on Fu Manchu.

Y is for Young Detectives.

Did you know? Emil and the Detectives has never been out of print.

Z is for Zodiac, with a copy of Soji Shimada’s The Tokyo Zodiac Murders.

Overall, a charming collection – but surely there must be better candidates for D and Z?

Thanks to an alert from @crimeficreader, I can now share one of the panel events associated with the exhibition:

18 Responses to Murder in the Library