Ruth Rendell: A Demon in my View

I came to A Demon in my View after reading two American psychological thrillers, A Kiss Before Dying and Beast in View, and the contrast is interesting. The American titles have an indefinable gloss and an expansiveness, a sense of scale, to the writing. By contrast, Rendell’s novel feels downbeat, shabby, and claustrophobic. 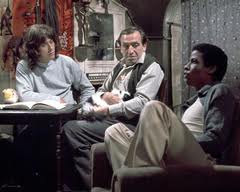 The setting is 1970s bedsit-land, and Rendell really captured the time – having to plan when you are going to use a shared telephone, rent payments in brown envelopes, patchouli oil, two-week dustmen’s strikes. To me it’s reminiscent of the British sitcom Rising Damp [pictured] and the story has similar touchstones: education, race, and relationships. There’s even an instance of that 70s comedy stand-by, when a long-haired girl seen from behind turns out to be a hippy.

Obviously, though, this is a Ruth Rendell story and she’s not playing for laughs.

Arthur Johnson, the Kenbourne Killer, has been controlling his strangling urges for twenty years with the help of a shop-window dummy hidden in the cellar of his shared house. She is dressed in his Aunt’s clothes, obviously, and he pops down there whenever the house is empty to ‘kill’ her.

‘Her white face, beautiful, unmarked by any flaw of skin or feature, stared blankly back at him. He fancied that she had cringed, her slim body pressing further into the wall behind her. He didn’t speak. He had never known how to talk to women. There was only one thing he had ever been able to do to women and, advancing now, smiling, he did it.’

Arthur is a pernickety man who resents disorder, puts on a front of blameless propriety, has no social skills, and lacks any sense of perspective,  – he writes a lengthy and remorseful note of apology when he opens a letter in error, but excuses himself the occasional killing. Rendell’s ability to make Arthur sympathetic is remarkable and a little disturbing.

The arrival of the similarly named Anthony Johnson, a PhD student studying psychopathy, marks the beginning of a chaotic new period in Arthur’s life, and ultimately to more deaths. Anthony’s love affair with an annoyingly poetic woman called Helen reads like a subplot until it is woven back into the narrative later in the book. The end, when it comes, is sudden, and not at all what I expected in the penultimate chapter.

2 Responses to Ruth Rendell: A Demon in my View