Where’s Papa going with that ax? The #1952book challenge

Posted on September 1, 2014 by pastoffences

This month I’m opening with a quiz question: ‘Where’s Papa going with that ax?’ is the ominous first line of which book from 1952? Answer at the bottom.

Thanks to everyone who took part in this month’s challenge. A bumper crop, and I apologise profusely if I’ve missed you in the round-up.

An original flier for The Mousetrap at the Ambassadors Theatre, topically enough starring a young Richard Attenborough.

I have just posted on Hillary Waugh’s excellent Last Seen Wearing…, but I also weighed in with my thoughts on Agatha Christie’s very funny Mrs McGinty’s Dead. The Dame managed another winner in ’52: The world’s longest running play, The Mousetrap. I saw this last year at St Martin’s Theatre and failed to review it (sworn to secrecy, you see).

However, some fresh reviews of the play (now on more than 25,000 performances in an unbroken run) appeared on Tripadvisor this month:

What a show. Nice hall, good old ‘no frills’ theatre. Wonderful acting. Taut, intriguing murder mystery- had me totally involved- and the end caught me by surprise! An evening well spent… Highly recommended!

I also liked the fact that the young lady usher had the decency to pull up some silly drunken girl and told her to stop messing about, I don’t know why she came as she then promptly fell asleep, the daft mare.

First of the reviewers was Noirish‘s John, with a reading of the noirish One is a Lonely Number (1952) by Bruce Elliott, noting that some of the situations described therein are not quite as OK now as they were then. Certainly you wouldn’t find many publishers choosing the strapline on the Dell edition these days.

Elliott focuses on his two richly complex principal characters, Larry and Jan, to the extent that the others are just sketched in. But those two are enough. Jan eventually becomes an enormously sympathetic character as we discover the wringer life has put her through. Larry is at first much harder to like, because in the early stages of the book he’s merely a survivor who has few compunctions about doing what it takes to assure said survival; he doesn’t revel in brutality, but it doesn’t trouble him if it’s the easiest option.

Tey’s evocation of the Highlands and its people is wonderful. This sense of delighted familiarity continues as Grant, his neurosis ebbing, becomes obsessed with the dead man and that fragment of verse. The obsession takes him to an island in the Hebrides reputed to have singing sands. While his detour there gives Tey the chance to tell a very amusing, near comedic tale, this section of the novel is completely redundant; those singing sands aren’t in Scotland at all but, as Grant discovers upon his return to the mainland, in distant Arabia. 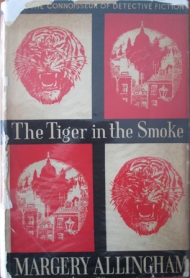 Rebecca at Ms Wordopolis read Margery Allingham’s The Tiger in the Smoke, enjoying it as much as everybody should.

It’s a great read in terms of characters, thoughtfulness about evil and the lingering effects of World War II, and the plot. It feels more substantial and more memorable than many books I’ve read this year, and I’m glad I read it.

Sergio tipped his fedora at (to?) Rex Stout’s Prisoner’s Base:

This has so much memorable character stuff along with its great plot – Archie and Wolfe fall out, he goes off to investigate alone; when he gets arrested Wolfe, having suffered the indignity of being manhandled and taken down to the police station, takes Archie on as a client; Archie falls for Sarah Jaffe, the delightfully scatterbrained widow of a Korean vet and helps her get over her grief; and because when a third death occurs while Archie was talking on the phone to the victim at the time, he joins the cops as a consultant to crack the case. 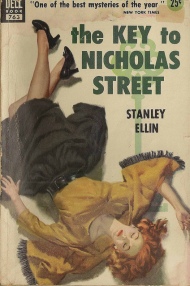 And then returned with Stanley Ellin’s The Key to Nicholas Street:

Stanley Ellin’s sophomore effort details the fallout from a murder in Sutton, a small town about 100 miles out of New York City. The narrative is subdivided into five sections, one  for each member from a single household who all get to narrate their own story.

Clothes in Books looked at My Name is Michael Sibley by John Bingham, and found it well constructed, if a little bit miserable. Moira recommends getting the edition she read with an intro by John Le Carre:

He says that the author John Bingham was one of the models for Smiley, but that Bingham hated the books and felt a deep sense of betrayal – not because of the portrayal, of himself, but because of the picture of the intelligence services that Le Carre showed. Le Carre says that Bingham – apparently a very senior old-school spymaster – was a man of great humanity, honour and trustworthiness, with ‘gentle old-fashioned zeal.’

Virginia Wales, a waitress in a hash joint in a California-Mexico border town, was a good time girl. Always looking for a laugh, an adventure, one of those “live life to the fullest” women who almost always land themselves in trouble at the expense of a good time. One night someone entered Virginia’s hovel of an apartment and bludgeoned her to death with an award she won for jitterbug dancing back in 1937. An ugly crime, and an undeserving end for a woman who never really hurt anyone.

The Game’s Afoot admired Jim Thompson’s The Killer Inside Me:

The Killer Inside Me is one of these novels that leave you breathless. Heartbreaking, violent and brutal but superbly well-written. Thompson is able to get into the mind of a psychopath, but what really scares us is that the criminal can be an ordinary person. Someone we know for a long time, even one of us or very close to us. A novel that shakes us and leaves us with certain degree of uneasiness, but a masterpiece. A must read. 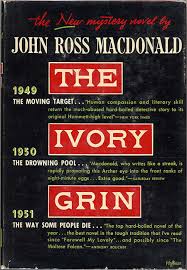 Tracy at Bitter Tea and Mystery looked at Ross Macdonald’s The Ivory Grin, and found it an interestingly liberal book for 1952:

The young woman who Lew Archer is seeking is a black woman, but light-skinned enough to have passed for white at times. It was good to read a vintage mystery which handles race relations evenhandedly. There are several black characters, their story is followed throughout the novel, and the characters are portrayed compassionately. This story also contrasts between those who have wealth (or want it badly) and those who are closer to poverty. 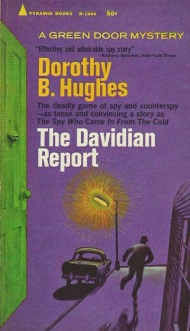 Steve’s goal is to find a man named Davidian who will pass on an important report to him. Of course, Steve is not the only one who wants the report. This is the classic case of not knowing who to trust or if anyone is who they seem to be. 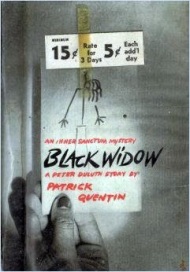 The innovation of the Peter Duluth series, which was launched in 1936, was wedding the formal deductive mystery to the personal anxiety, or suspense, tale, associated with such writers as Mignon Eberhart in the 1930s, Dorothy B. Hughes in the 1940s (though some of Hughes’ stuff is more genuine noir) and Ursula Curtiss in the 1950s. There is resemblance to Cornell Woolrich as well, though the series is not dark enough to qualify quite as true noir, in my opinion.

Curt then took a gander at Edward D. Radin’s Headline Crimes of the Year, a rare review (in terms of what I see) of a true-crime book.

The book was published first in hardcover by Little, Brown, but its most memorable incarnation probably was in paperback, when it was reprinted that same year by Popular Library, in an edition thrillingly headlined The Inside Story of America’s Most Shocking Crimes. Who wouldn’t buy that for a quarter, Popular Library must have thought.

Just how Shocking are these true crimes, all of which were in the news around the late 1940s/ early 1950s? Well, by today’s sad standards, not so much, but it’s still interesting to see what mayhem was going on in the United States and other parts of the world during those ostensibly good old days.

Curt is writing another ’52 review soon, but if I don’t post this now I never will… maybe a link in the comments.

And finally to 1952 at the movies. John at Noirish did sterling work this month reviewing some of the films of the year.

The Voice of Merrill: Struggling mystery writer Hugh Allen is introduced one night at the Flamenco restaurant by his publisher, Ronald “Ronnie” Parker, to Alycia Roach, unhappy wife of the hugely successful, extraordinarily egotistic and thoroughly obnoxious playwright Jonathan Roach. Hugh’s date, Jean Bridges, has stood him up; we very soon learn that she was the young woman whom we saw gunned down by a mysterious figure in the opening moments of the movie.

Something to Live For: The chemistry between Milland and Fontaine (who much of the time here uses a throwaway diction that seems almost to anticipate mumblecore) is excellent, nowhere more so than in the movie’s most romantic scene.

The Floating Dutchman: One never expected masterpieces from Merton Park, but their cut-price fillers did have their charms—they offered an enjoyable way to spend an hour or so even if they tended to be forgotten within minutes of the A-feature starting.

The Bushwhackers: The Bushwhackers, although very much a borderline piece of noir, is obviously of considerable genre interest—not just because it has a noirish cast to die for but also because it’s full of noirish memes: corruption of the local law authorities, a ruthless local kingpin who will stop at nothing, an equally ruthless femme fatale, a plucky newspaper editor who finally speaks truth to power, a craven cop, a hero who seeks to avoid violence but is eventually driven to it …

A lovely shot from George Stevens;’ Something to Live For starring Joan Fontaine and Ray Milland, reviewed by John over at Noirish.

And ‘Where’s Papa going with that ax?’ is…

The first line of E. B. White’s Charlotte’s Web. Kids grew up fast in them days. 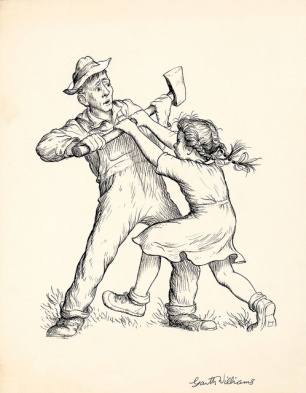 As always, the next year is up to you guys…

17 Responses to Where’s Papa going with that ax? The #1952book challenge