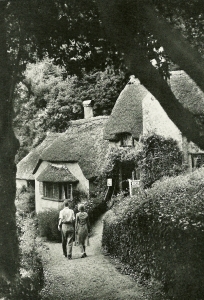 The village was beautiful. It was enfolded in a hollow of the Downs, and wrapped up snugly—first, in a floral shawl of gardens, and then, in a great green shawl of fields. Lilies and lavender grew in abundance. Bees clustered over sweet-scented herbs with the hum of a myriad spinning-wheels.

After enjoying The Wheel Spins, I went straight on to a second Ethel Lina White novel in the same economy e-book bundle, Fear Stalks the Village.

The titular village is one of those idealised English villages of the Golden Age mystery, but stretched almost to hyper-cosiness. It is a deliberate caricature of the type.

It was a spot which was rarely visited. There was no railway station, no floating population, and a stagnant birth-rate. Even Death seldom knocked at its doors, for the natives resented the mere idea of dying in such a delightful place.

We are introduced to the village by Joyce, a young woman employed as a companion, who entertains a friend from London for the day. The friend, an aspiring writer, readily imagines a dark side to village life – affairs, cruelty, alcoholism, and secrets (perhaps she grew up to be Caroline Graham) – and unlikely as it seems at first glance, she may have hit the nail on the head.

Within days, a poison-pen letter is delivered to the home of the saintly Miss Decima Asprey, a woman prominent in the village and known for her charity work, kindness, and rectitude. Is Miss Asprey too good to be true? Some of the more sensitive villagers spot something odd in her relationship with her companion Miss Mack.

‘She’s an earthly saint, and so good she’s not quite human. Miss Mack simply worships her, and runs after her like a little dog.’

As is the way of poison-pen stories, the correspondence begins to spread to other recipients, long-preserved secrets begin to be threatened, and as we are promised in the title, fear begins to stalk the village. A striking feature of the book is the way fear is depicted – as an almost physical presence hovering in the sidelines at garden parties, waiting just inside people’s front doors, or following them down the street. Always ready to pounce.

‘Well, Decima, anything fresh about your anonymous letter?’
Miss Asprey raised her heavy ivory lids.
‘No,’ she replied. ‘It is best forgotten.’
‘No idea as to who wrote it?’ went on Miss Corner, unabashed.
‘No.’
Miss Corner suddenly exploded into a fit of laughter. “Perhaps I could make a guess,’ she said.
As though her words were a signal, the dark blotch, huddled in a corner of the garden, quivered into hideous life and mingled with the other guests.

The village’s Rector has a friend, Ignatius, ‘a chap with nothing to do, who’s potty on puzzles’, who comes to resolve the mystery. He is a fairly typical eccentric/arrogant amateur sleuth who finds himself at sea in a rising tide of suspicion. The social calendar of the village begins to break apart, and nobody seems to be able to stop it. Will he manage to find the culprit before the village loses its innocence forever?

I disagree with the two reviews posted below – I don’t think the book drags particularly. It is knowingly cosy and the descriptive passages add to this. Nor would I say the villagers are complacent. The threat to village life seems somehow more serious than the threat to the lives of individual villagers, so their initial reaction is to keep things going, and then retreat into their cottages to keep their heads down.

Well worth a read, I think, if you enjoy a slightly literary 1930s mystery.

A Hot Cup of Pleasure: While good in parts, this novel was overall a drag. Too many descriptive passages took away the tautness needed in a mystery novel. And the village began to irritate me with its very complacency. Nevertheless, White remains a favourite and I am keen to read more of her works.

Chocolate Cobwebs: While this novel was interesting (you don’t often read about suicides in Golden Age fiction), it also dragged a little. I could have done with a lot of the descriptive passages being cut, as they seemed quite repetitive.