Eric Shepherd: Murder in a Nunnery 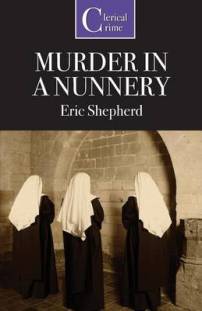 Murder in a Nunnery is an affectionate portrait of matter-of-fact entirely unsheltered nuns and sensation-hungry schoolgirls – none of whom is particularly phased by a murder in their midst.

Madame Sliema is a nasty old lady seeing out her final years in Harrington Convent, practising her malice on a put-upon companion, a young ward and a distant son who is kept on a pittance. When she is stabbed there is a general lack of grief and precious little surprise. The nuns certainly take matters in their stride, surprising the police with their cool heads and lack of awe.

The Detective-Sergeant, Police-Surgeon Goodall and several constables left by car for the Convent.
But if these gentlemen had been disposed to find something funny in the idea of murder in a Nunnery, they were soon called to order and made to think very differently when they encountered Mother Peck, the portress, at the door. Mother Peck looked them over with a sharp and blighting eye, dwelling particularly on their feet – and then interned them in small and hideous parlour designed to break the contentious spirit of visiting parents. Here she left them – with a supply of CTS tracts – until, as she put it, “someone had time to attend to them.”

The chief investigator is Inspector Pearson, notable for his politeness and meekness (he is definitely inheriting the earth). He rapidly becomes a favourite with both nuns and students, who regard him as a ‘pet lamb’. For a policeman he is definitely unworldly – the worst thing that happens to him in the course of the book is entering a lady’s bedroom at night.

Never before in all his professional life had he lurked outside the bedroom door of a young and attractive girl. He had never felt the urge. He did not feel it now, quite the contrary.

At 164 pages, this is a very light read and might be best purchased with its sequel, More Murder in a Nunnery (of which, more soon).

Underground Reading: Chief Inspector Pearson, the book’s detective, is the major source of this particularly laid-back investigation. He’s so wonderfully British that his tea practically sips itself (and then apologizes profusely for the inconvenience). He meanders happily from one corner of the convent to the other, lingering over breakfast, chatting with the gardeners and only really getting worked up when one of his patrolmen fails to hold the door open for the ladies.

Pretty Sinister Books: Murder in a Nunnery (1940) was quite the sleeper when it was first published. Though published by small press Sheed & Ward it managed to get picked up by the Catholic Book Club in 1940 and turned into a minor sensation. Twenty two years later it was reprinted as a paperback from Dell’s Chapel Books imprint and sold thousands of more copies.

9 Responses to Eric Shepherd: Murder in a Nunnery