Get A Fatal Inversion on DVD from Amazon.com (US visitors) 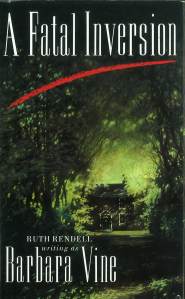 I bought this on a recent trip to London, when I was able to squeeze a visit to Henry Pordes Books on Charing Cross Road in between meetings. £7 all in. I picked up Pierre Magnan’s Death in Truffle Wood on the same trip and will be reviewing that in due course.

I’ve read plenty of Ruth Rendell’s work, but never one by her alter ego Barbara Vine, so I was looking forward to this.

The story switches between 1986 and 1976 and uses three main points of view. Pedantic and charmless Adam Verne-Smith owns a software company. The charismatic Dr Rufus Fletcher is an up-and-coming gynaecologist with a Wimpole Street practice. Shiva Manjusri is an assistant in an East London pharmacy. But ten years previously they were all living the hippy lifestyle for one golden summer in Ecalpemos. The three guard a guilty secret from their shared past, and that secret is slowly revealed as the book progresses, although the end-point is clear from chapter one: the bodies of a young woman and child are unearthed in a Suffolk woodland.

Rendell/Vine is a great stylist and really shows off. The doctor, Rufus, does not attend the inquest but is able to imaginatively reconstruct the pathologist’s evidence to the court. Meanwhile, she plays with Adam’s job, using an extended metaphor of him using a mental ‘Esc’ key to suppress unwanted memories. Even the location of Ecalpemos is hidden for a while.

‘The things that had happened at Ecalpemos, Adam resisted thinking about. He dreamed of them, he could not expel them from his unconscious mind, and they also came back to him by association, but he never allowed himself to dwell on them, to operate any random access techniques, or eye for long the mental screen where options appeared. When the process began, when association started an entering procedure – at, for instance, the sound of a Greek or Spanish place-name, the taste of raspberries, the sight of candles out of doors – he had taught himself to touch an escape key, rather like that on the computers he sold.’

The ‘long hot summer’ of 1976 is lovingly evoked, as is the carefree life of people in the early twenties, both of which serve to make life at Ecalpemos seem Edenic: obviously someone gets them cast out, but who?

And who do the bodies belong to? Potential victims come and go in 1976 with no hint of their whereabouts in 1986. Rendell’s young women are much more rounded and interesting than the young men, who are basically loafing around. Liz Taylor lookalike Mary single-mindedly pursues her dream to get to Greece. Runaway Zosie is disturbed and mysterious in equal quantities. Spiritual seeker-after-truth Vivien is Ecalpemos’ earth-mother.

‘The last thing of that night he could recall was Vivien opening the big cylindrical carpet-bag she carried and his seeing for the first time all those Bach flower remedies and little bottles of homoeopathic pills and herbal stuff.’

Incident by recalled incident, the memories of the three men tell the story of Ecalpemos and build slowly to a tragic finale.

A Fatal Inversion is nostalgic, intelligent and soulful crime fiction at its best.

Now that I’ve begun sharing YouTube clips on here, here is a trailer for the 1992 TV adaptation of A Fatal Inversion.

Thanks to Miss Lemon for her explanation of the title. I’m really not very quick sometimes and hadn’t worked it out until I read her review…