Posted on August 8, 2012 by pastoffences 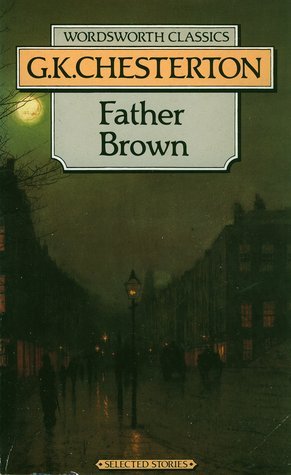 Judging from the popularity of my two previous posts on the BBC’s forthcoming adaptation of  Father Brown, lots of people are already getting interested in G. K. Chesterton’s clergyman-sleuth ahead of the show’s transmission. To encourage people to read the stories, I thought I would review some of my favourite stories from the 49 originally written between 1910 and 1936.

‘The Blue Cross’ is the first story in The Innocence of Father Brown, originally published in 1911. It introduces Father Brown, his occasional collaborator Flambeau, and Inspector Valentin of the French police.*

It is the tale of two great and arrogant adversaries. Valentin (‘the head of the Paris police and the most famous investigator of the world … coming from Brussels to London to make the greatest arrest of the century’) and Flambeau (‘the colossus of crime’). Valentin has tracked Flambeau across Europe and is convinced he is hiding out in London, using the confusion caused by a Eucharistic Congress as cover.

Travelling to the city, Valentin meets (and is unimpressed by) ‘a very short Roman Catholic priest going up from a small Essex village … The little priest was so much the essence of those Eastern flats; he had a face as round and dull as a Norfolk dumpling; he had eyes as empty as the North Sea; he had several brown paper parcels, which he was quite incapable of collecting.’

This is Father Brown, who is taking a valuable silver cross with blue stones up to London, and in his innocence foolishly tells everyone about it until Valentin warns him to be more careful.

‘The Eucharistic Congress had doubtless sucked out of their local stagnation many such creatures, blind and helpless, like moles disinterred.’

However, Valentin seriously underestimates the priest – as in turn does Flambeau. Ultimately, it is the little parish priest who captures the master criminal. Brown knows every criminal trick in the book, all picked up from his less-than-honest parishioners.

‘”I learnt that, too, from a poor fellow in Hartlepool … Oh, one gets to know, you know,” he added, rubbing his head again with the same sort of desperate apology. “We can’t help being priests. People come and tell us these things.”‘

We don’t learn much about Brown in this first story, but we do get to hear some of his worldview and get a feel for his approach to crime. Brown is not a scientific detective and proceeds on his knowledge of the darker side of human nature and his belief in the rationality of creation. He is far more concerned with bringing Flambeau around to his worldview than in capturing him.

I’ll end with a bit of Chesterton’s purple prose.

‘”Reason and justice grip the remotest and the loneliest star. Look at those stars. Don’t they look as if they were single diamonds and sapphires? Well, you can imagine any mad botany or geology you please. Think of forests of adamant with leaves of brilliants. Think the moon is a blue moon, a single elephantine sapphire. But don’t fancy that all that frantic astronomy would make the smallest difference to the reason and justice of conduct. On plains of opal, under cliffs cut out of pearl, you would still find a notice-board, ‘Thou shalt not steal.'”‘

* ‘The Blue Cross’ was originally published as ‘Valentin Follows a Curious Trail’ in The Saturday Evening Post, 23 July 1910. Valentin is anglicised to Valentine in the new BBC series, and will be played by Hugo Speer from The Full Monty.