‘It was fun to find a reason for him to throw soup at the wall.’ An interview with the creators of the BBC’s Father Brown

Well, Father Brown is over for another year (in the UK at least). Series 2 continued to generate heat on Past Offences – for a daytime TV drama, it manages to be quite controversial!

I’ve been lucky enough to bag an interview with the show’s developers Tahsin Guner and Rachel Flowerday and to get an insight into the practicalities of adapting the original stories of G. K. Chesterton for a TV show. Rachel and Tahsin are both graduates of the BBC Writers’ Academy and between them have written for Holby City, Casualty, Eastenders, and Doctors. I caught them in a lull between series.

You seem to have strayed from the G. K. Chesterton source material almost entirely this series. Is this because the original stories don’t translate well to TV? Or is it just simpler to start from scratch?

Rachel: Well, every writer pitches their own episode story, which can be an adaptation or an original concept. We’re limited in the Chesterton stories we can use, because they have to be out of copyright both here and in the States (which has different copyright laws) so that BBC Worldwide can sell them abroad.

Of the stories we can use, many just don’t translate to a visual medium and a 45-minute playing time. 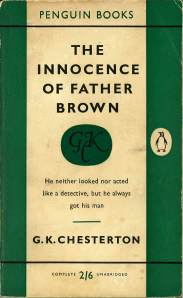 Of the eleven stories in The Innocence of Father Brown, we have already adapted or are adapting seven. Our first priority has to be creating a satisfying story for the medium we’re working in, to give viewers the best experience we can.

Tahsin: Chesterton’s original stories tend to be very short, often with Father Brown only making an appearance at the end, having been hovering in the background until then. Obviously, we don’t want Mark Williams lurking in the background without saying anything until the final act. Expanding a story to 45 minutes means creating more suspects, red herrings, and giving roles to the regular supporting characters. There are also some elements of the stories that might work well in prose fiction, but would seem implausible when told as TV drama – visual storytelling is an unforgiving medium!

Based on the first episodes of series 2, the show seems darker, sometimes even horror-tinged. Was that deliberate or is it just the way the stories have developed? 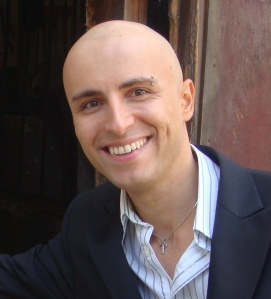 Tahsin: I think a lot of the fun of the series comes from the fact that you don’t really know what to expect from each episode – it can be dark, funny, off-beat, heightened, moving. I doubt it was a deliberate decision to make this series darker (although you’d have to ask Neil Irvine, our brilliant script producer) – but given that many of the stories are tales of redemption, it’s not surprising that there’s a vein of darkness. Having said that, there’s a lot of humour too – particularly in an episode like ‘The Daughters of Jerusalem’, which showcases the comic sparring between Mrs McCarthy and Lady Felicia.

Do you think you’ll ever introduce a story arc? What informs that kind of decision?

Tahsin: It would be nice, but for the most part, the series is designed to be shown in any order – so we have to be careful about introducing story elements that feel like they’ll need to be picked up on in later episodes. 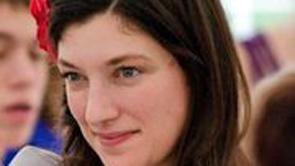 Rachel: I think it’s highly unlikely. Part of the show’s charm is that each episode is a self-contained nugget – and that everything is resolved at the end of the episode. We’re never going to have end-of-episode serial cliffhangers!

The BBC and BBC Worldwide are also keen to have a show that they can transmit in different slots – so they aren’t confined to a series length of five episodes, they can put out eight or ten or 21, depending on what works for the territory, and in whatever order they fancy, and it doesn’t affect the viewer’s enjoyment of the episodes.

What we do have (which the stories largely don’t) is an ongoing gang of characters – who act, in lieu of a series arc, as the glue that sticks our series together; they help provide the recognisable world that the audience (hopefully) enjoys visiting.

Do you watch a lot of crime TV? Or do you try to avoid other shows?

Rachel: I think these days it’s sadly a bit of a busman’s holiday… I have always been a voracious reader and must have consumed the entire Agatha Christie canon in my time, alongside harder-edged thrillers, modern mysteries like the Nicci French novels – you name it! And I’m old enough to remember with great nostalgia the Joan Hickson Marple, early Morse and Poirot, A Touch of Frost… And of course the greats of daytime TV from the ’80s – classic US imports like Columbo and Murder She Wrote. These days I am more likely to be watching The Killing, The Bridge, Broadchurch… Incredible series, but not ones that share a tone or theme with Father Brown. I do watch shows like Death in Paradise and Midsomer Murders nowadays, but I always to some extent have my work hat on – more because I know the writers and producers than because I’m dissecting them for tips! Though tonally, of course, our version of Father Brown does have a debt to those series. Our Father Brown definitely has a debt to Columbo too…

Tahsin: It’s a real education to watch how other writers structure their mysteries and misdirect the audience. Writing a mystery is probably one of the harder genres to crack, because you know that the audience is going to be actively engaged in analysing your structure! They’re interrogating the story, and at least on an unconscious level, questioning the motives of the writer as well as the characters, to see if they can sort the genuine clues from the red herrings. Of course, playing detective is part of the fun of watching a mystery!

Mark Williams recently gave an interview in which he suggested the show represented very good value. If you had a bigger budget, what would you do with it?

Rachel: Give them longer to film in! The show is shot very fast, which is how it’s done on the tiny budget we have. I know everyone on the production would love to have a bit more time and breathing space. As it is, if there’s a problem with something – for example, the weather – either the scene just has to plough on through it, or it’s pushed to another day which may mean re-siting it altogether or squeezing the time they have to shoot other things. The cast and crew are heroes for getting it done in the time they have!

Tahsin: In any show there are always going to be restrictions, whether it’s budgetary, logistical, the availability of actors, etc. But hopefully those restrictions force you to come up with even more creative solutions. Certainly, if we had a bigger budget, it would be nice to occasionally put Father Brown in locations outside of Kembleford. In the original stories, he pops up in all sorts of places – Paris, a yacht, London.

On a similar note, are you envious of Sherlock?

Rachel: Well… We’re a very different show, trying to do something different for a different audience. I’m not sure there’s much point comparing us – that way madness lies. Of course we’d love to have a bigger budget; we’d love to see the show in a slot that opened it up to a wider audience. But we’ve been hugely lucky with the coverage and audience we’ve achieved in the slot we’re in. And with a greater budget and profile comes great responsibility… If the Sherlock team put a foot wrong, the whole of Britain is there waiting to tell them about it! We have been lucky enough to be a ‘sleeper hit’ – there were no entrenched expectations (except perhaps from die-hard Chesterton fans), so by and large we haven’t been under the massive pressure that the Sherlock team must feel.

What do you think each of the regular characters add to the mix?

Tahsin: The regular characters are crucial, helping to create a sense of family and continuity – characters that we’ll enjoy spending time with in each episode, even when Father Brown isn’t on screen. It helps that our supporting actors are all so fantastic in playing their roles!

Mrs McCarthy brings a huge amount of humour, and as resident busybody is happy to dig up information for Father Brown, as well as coming up with her own theories about whodunit! Lady Felicia brings a sense of glamour (just look at those outfits!), and is a way into the aristocratic world. Plus, she really knows how to scream! As a former small-time crook, Sid is Father Brown’s go-to man when it comes to criminal activity – it’s likely Sid taught Father Brown everything he knows about lock picking – and like Lady Felicia, he’s a window into another world. Inspector Sullivan brings a certain debonair charm to Kembleford, and unlike Valentine before him, is much more cerebral in his approach to criminal investigation, pitting him against Father Brown’s intuitive approach – if they’d only work together, they could be a great team, but Sullivan has too much pride to let a meddling priest steal his thunder!

Rachel: If Mrs McCarthy decided to stop prying, or Sid got married, or Lady Felicia resolved to settle down and be a good wife, the series, or at least their role in it, would be finite. With standalone episodes, we can press the ‘reset’ button at the end of each one, and enjoy the status quo all over again next time round…

Was Hugo Speer’s (Inspector Valentine)’s departure planned or did you have to react to it mid-series?

Rachel: We knew in the early stages of planning series 2 that Hugo was booked for Musketeers and wouldn’t be able to manage both shoots. We had a big debate about whether to give Valentine a send-off or just hit the ground running in series 2 with a new detective. Obviously the fact that we don’t do series arcs meant the latter was an obvious choice! But to me, it would have been a terrible shame if we hadn’t waved goodbye to Valentine and acknowledged the key role he’d played. It was important, too, that he didn’t die, or leave in disgrace – we didn’t want to sully the character, and tonally, leaving on a high felt like the best fit. My episode 1 had already been planned, but it felt like a perfect fit to feather Valentine’s exit into the story. We were very lucky that Hugo was prepared to use his week’s holiday from the Musketeers’ shoot to come back and film with us.

Was the soup-throwing in ‘Maddest of All’ a nod to the books? Are there any other examples of that?

Tahsin: Yes, it was a deliberate nod to the soup-throwing scene in ‘The Blue Cross‘! We often talked about “soup throwing” moments as a metaphor for those times when Father Brown surprises us by doing something unexpected or enigmatic – and it was fun to take that literally and find a reason for him to throw a bowl of soup at the wall! 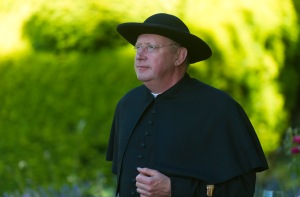 Mark Williams as Father Brown – series three in the pipeline.

Tahsin: Yes! Series 3 is in the works now – and this time there will be 15 episodes, rather than 10!

5 Responses to ‘It was fun to find a reason for him to throw soup at the wall.’ An interview with the creators of the BBC’s Father Brown