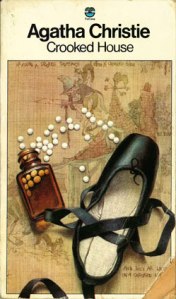 Only four books this month, a mix of ancient and modern…

Bleed Like Me (which I’m reviewing for Eurocrime) is another slice of Scott & Bailey novelisation from Cath Staincliffe. As with the first title Dead to Me, it accurately captures the no-frills, no-nonsense atmosphere of the TV show. If you like that (and I do), you’ll like this.

Agatha Christie’s Crooked House came highly recommended by fellow bloggers Sarah and Sergio, and by Agatha herself. It’s a country-house mystery with an array of suspects who all had plenty of means and opportunity. The detective is marrying into the family, so has good reason to sort things out properly. The solution is a classic piece of misdirection.

Carin Gerhardsen’s The Gingerbread House (another for Eurocrime) follows Stockholm cop Conny Sjöberg in his pursuit of a serial killer. The mix of blood, guts and cosy domesticity will appeal to fans of Camilla Lackberg. And it also relies on a piece of misdirection – you’ll kick yourself. 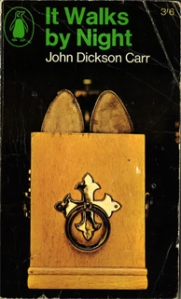 John Dickson Carr’s It Walks by Night is a locked-room mystery starring his first series detective Henri Bencolin. A French nobleman is found beheaded in a closely-watched room in a Parisian gambling house. The chief suspect is a known killer with a grudge against the victim, but thanks to the modern miracles of plastic surgery, could be anyone…

It would have been Carr’s 107th birthday today, so it’s fitting that I’ve awarded him pick of the month. I love his florid writing and grotesque set-ups, and It Walks by Night has these characteristics in spades.

You can see other bloggers’ picks over at Mysteries in Paradise: http://paradise-mysteries.blogspot.co.uk/2013/12/crime-fiction-pick-of-month-november.html

2 Responses to November’s crime fiction pick of the month