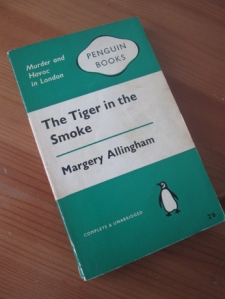 The Tiger in the Smoke
Margery Allingham
First published in the UK 1952, Chatto & Windus
This edition Penguin Books, 1961
224 pages
Source: Reviewer’s own

In the shady ways of Britain today it is customary to refer to the Metropolis of London as the Smoke.

Coincidentally, as the UK suffers its worst smog in years, I am reading a book in which the London fog is almost a character in itself.

The Tiger in the Smoke is usually regarded as Margery Allingham’s finest work (it’s certainly in the top three). After reading works by her successors Philip Youngman Carter and now Mike Ripley, I decided to head back to the original to refresh my memory.

In chapter one we are introduced to a young couple about to get married: Geoffrey Levett and Meg Elginbrodde. Geoffrey is a successful entrepreneur; Meg a bright young designer. They are ostensibly the perfect couple, but they are in crisis. Meg has been receiving photos of her first husband Martin in the post. Like many a war widow, Meg married young and in a hurry, and saw her husband very little before his death overseas six years earlier. The photographs are blurred, but the figure is familiar enough to make her half-believe Martin is still alive. Geoffrey is taking Meg in a taxi to meet the man at Paddington. Upset and suffering from chronically divided loyalties, Meg says goodbye to Geoffrey and goes in without him. She doesn’t know whether to expect blackmail, a con trick, or some terrible remnant of her husband. Fortunately, she is not alone. Meg is a cousin of Albert Campion, the famed amateur detective, and he has brought along his friend Chief Inspector Charlie Luke.

Meanwhile, a man known only as Jack Havoc – regarded as one of the most dangerous criminals in the country – has escaped from prison by feigning insanity. Already he has killed and the police have initiated an enormous man-hunt. But in the London fog it is difficult to find anything or anyone.

Dead or alive, Martin Elginbrodde is merely the first link in a chain which will link the fates of Jack Havoc, Geoffrey and Meg, Meg’s saintly father Canon Avril, and a sinister band of street musicians led by the albino Tiddy Doll. On one side, Havoc is hunting and killing almost with impunity, getting tired and sloppy but trusting to his seemingly endless store of luck. On the other, the police led by Charlie Luke tirelessly sift evidence and witness reports in an attempt to track him down. In the middle, Meg’s family and friends sit fog-bound in the vicarage in St Petersgate Square, in more danger than they know.

The Tiger in the Smoke is not just a story about a man-hunt; it works on several levels as I’ll explain in the next few posts. But first of all, the fog.

As in Bleak House, the fog settles in chapter one and the reader doesn’t escape its grasp until the final chapters. Allingham brings all of her formidable powers of description to bringing it alive:

The fog was like a saffron blanket soaked in ice-water. It had hung over London all day and at last was beginning to descend. The sky was yellow as a duster and the rest was a granular black, overprinted in grey and lightened by occasional slivers of bright fish colour as a policeman turned in his cape.

Sky as yellow as a duster is actually quite difficult to envisage in these less-polluted days, even this week. Allingham also anthropomorphises the fog (one of her signature tricks):

The fog had crept into the taxi where it crouched panting in a traffic jam. It oozed in ungenially, to smear sooty fingers over the two elegant young people who sat inside.

Quite apart from allowing Allingham to show off her writing, the fog has practical uses to a man on the run, making concealment and murder simpler. And the fog is exceptional:

If the fog had only cleared, tempers might have cooled, but now, at the end of the second day, it had become the father of fogs, thicker and dirtier and more exasperating than any on living memory. The only people not astounded by it were visiting Americans.

So we have fog as plot-point and as metaphor: writing at peak efficiency.

Ela’s Book Blog (‘Havoc’s a charismatic and handsome man, not the snivelling ugly or disfigured face of evil, as he’d be in the hands of a lesser writer (yes, I’m looking at you, Ian Fleming), but there is still a powerful sense of his otherness, his utter ruthlessness and callousness.’)

Shelf Love (‘Like Campion himself, Allingham’s Campion novels have gotten more serious. This book in particular has a lot on its mind, but it raises questions, rather than answering them. As usual, we do learn who did it in the end, but that question isn’t the important one. Why did he do it? What makes a person evil? How should the good respond to the evil? How will evil respond in the face of goodness?’)

Moving Toyshop (‘Every element of good mystery writing – plot, pace, narration, characterisation, location writing, humour – is present, but there are in addition those almost intangible factors which elevate the good to the great. In large part I think these are connected to the risk taking – the philosophical speculation, the assignation of a back-seat to the lead series character, the use of the fog as both physical device and over-arching metaphor, the creation and use of two unrealistic central characters – which Allingham was willing to attempt.’)