I got myself an e-reader at the end of 2014, and so my reading in 2015 has been dominated by the nice, free-to-air output of Project Gutenberg. In other words, most of my old books this year have not been smelly at all.

A. A. Milne’s The Red House Mystery, Israel Zangwill’s The Big Bow Mystery, Arthur J. Rees’ The Shrieking Pit, E. C. R. Lorac’s Murder by Matchlight, and some healthy dollops of Arthur Conan Doyle have all occupied my Kindle and come much recommended if you enjoy classic crimes. None, however, made my best of the year. For those titles, read on…

Veteran crime and young-adult writer Peter Dickinson sadly passed away earlier this month, so I’m happy to report that  The Glass-Sided Ants’ Nest and A Pride of Heroes both scored top marks.

In his first Gold Dagger Award-winning novel The Glass-Sided Ants’ Nest, the murder victim, Aaron Ku, is the chief of a New Guinea tribe transported lock, stock and barrel to a terraced house in London. The entire Ku civilisation currently lives in three bedrooms – one for the men, one for the women and children, and one for the anthropologist Dr Ku and his husband. The case is handed to James Pibble, the Yard’s specialist in ‘kooky’ investigations and a man with an instinct for spotting bad guys. A good crime novel made special by its unique setting and by its sympathetic portrayal of a culture struggling to survive in a strange milieu.

In A Pride of Heroes, Pibble is sent to another strange house – Herryngs – an archetypal English stately home transformed into a kind of English-heritage Disneyland, with actors portraying the servants, and a pride of lions patrolling the grounds.

Pibble is expected to cover up a suspicious suicide, but he ends up investigating (in the course of a very busy day) an olde-worlde shopkeeper, an alcoholic butler, a hustling businessman, an American millionaire photography nut, and of course Bonzo the lion.

It’s an older and wiser Pibble who wraps things up just in time for the press to arrive. 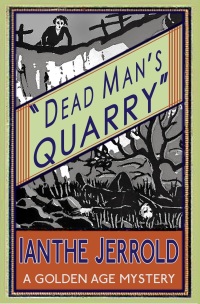 It has been a fine year for classic crime reissues, with Collins, the British Library, and smaller presses such as Ipso Books and Dean Street Press all revisiting the past.

A few titles stand out, but for me Ianthe Jerrold’s Dead Man’s Quarry was the winner. Her irrepressibly optimistic investigator John Christmas is drawn in to the murder of a young heir on the Welsh borders. The book has a strong flavour of Enid Blyton, with healthy young people on a bicycling tour and lots of suspicious locals in entertaining cameos. It’s the relationship between Christmas and his curmudgeonly sidekick, far from a loyal Watson, which made it stick in my mind.

Looking back over the notes in my elegant reporter’s notebook, I can see that ‘good quality books’ doesn’t necessarily mean ‘most memorable books’. I think Edgar Wallace’s The Angel of Terror will stay with me for its portrayal of 1920s female archvillain Jean Briggerland, never short of a dastardly scheme to bring down her saintly enemy Lydia Beale, but still kneeling down to say her prayers every night.

Also memorable is Charlie Mortdecai, a terrible person making his degenerately posh way through a world populated by other terrible people. It’s essentially silly and also brutal (not a common combination), but a Wodehousian turn of phrase lifts the book:

Somewhere in the trash he reads Martland has read that heavy men walk with surprising lightness and grace; as a result he trips around like a portly elf hoping to be picked up by a leprechaun.

Anyway, good vs memorable. One book meets both criteria admirably, being both an excellent and compelling mystery and extremely memorable for its atmosphere. Joel Townsley Rogers’ The Red Right Hand.

Dr Henry Riddle is stranded in the remote hills of Connecticut, alone with the girlfriend of Inis St. Erme, who was murdered earlier in the day. St. Erme’s body has been found, minus his right hand, and the killer is at large. Who could forget the hitch-hiker Corkscrew, a little man with red eyes, a torn ear, a distinctive blue saw-tooth hat, corkscrew legs, and a cultured voice, last seen driving St. Erme’s car along the country roads, laughing wildly, with St. Erme beside him?

The Red Right Hand is constructed like a thriller, narrated in a hypnotic first person voice, and also works as a fair-play mystery. My book of the year.