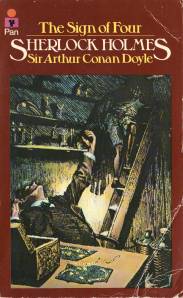 SPOILER ALERT!
‘The associate?’
‘Ah, well, there is no great mystery in that.’
(certainly not if you look at the front cover too carefully…)

The Sign of Four
Arthur Conan Doyle with an introduction by Graham Greene
First published in the UK 1890, Blackett
This version Pan Books, 1975
ISBN: 0330244264
140 pages
Source: Had it for ages

Sherlock Holmes took his bottle from the corner of the mantel-piece and his hypodermic syringe from its neat morocco case. With his long, white, nervous fingers he adjusted the delicate needle, and rolled back his left shirt-cuff. For some little time his eyes rested thoughtfully upon the sinewy forearm and wrist all dotted and scarred with innumerable puncture-marks. Finally he thrust the sharp point home, pressed down the tiny piston, and sank back into the velvet-lined arm-chair with a long sigh of satisfaction.

The Sign of Four is the third Sherlock Holmes story I’ve read this month in honour of the forthcoming series of the BBC’s Sherlock. The second episode in the series will be named The Sign of Three.

Graham Greene in the introduction to this startlingly brown Pan edition argues that, despite the fact that The Sign of Four was the second Sherlock Holmes novel (A Study in Scarlet first appeared in 1887), its first chapter is where the essential building blocks of the Holmes mythos come together for the first time. He makes a very convincing case – almost every paragraph contains another characteristic feature of the stories.

Miss Morstan and I stood together, and her hand was in mine. A wondrous subtle thing is love, for here were we two who had never seen each other before that day, between whom no word or even look of affection had ever passed, and yet now in an hour of trouble our hands instinctively sought for each other.

Unfortunately for the honourable Watson, Miss Morstan is in line to inherit a massive fortune once Sherlock Holmes has sorted out her case. If Holmes is successful, Watson feels he will have to make his excuses and leave, or risk looking like a gold-digger.

The first key to unlocking Miss Morstan’s fortune is a meeting with the younger son of her dead father’s friend Major Sholto. The gloriously odd Thaddeus Sholto rivals some of Dickens’ eccentrics.

… a small man with a very high head, a bristle of red hair all round the fringe of it, and a bald, shining scalp which shot out from among it like a mountain-peak from fir-trees. He writhed his hands together as he stood, and his features were in a perpetual jerk, now smiling, now scowling, but never for an instant in repose.

Thaddeus lives in a luxuriously oriental room in a ‘sorry house’: ‘An oasis of art in the howling desert of South London‘. No sooner has he met Holmes and Watson than he has got the doctor to listen to his heart (suspected troubles with his mitral valve). Then he settles down with a hookah of balsamic tobacco to tell his story.

His father, it transpires, had been ‘looking after’ Miss Morstan’s fortune, but was murdered a few years ago in mysterious circumstances. Since then, Thaddeus’ elder brother Bartholomew has been tearing apart his home Pondicherry Lodge looking for its hiding place.

Thaddeus reveals he has finally found it. When the team arrives at Pondicherry Lodge to take matters up with Bartholomew, he has just been killed – in the same way as his father. A note signed with the ‘sign of the four’ provides the first of many clues for Holmes.

A sniffer-dog named Toby fails to find the culprits despite his infallible nose. The Baker Street Irregulars, Holmes’ gang of urchins, fare better. Once on the trail, Holmes and Watson pursue the men to the bitter end. All along, Watson is left wondering who the murderer could be (sadly he is unable to look at the front cover of the book).

It’s pretty striking how much can be achieved in 140 pages: establishing a couple of immortal characters, a detailed back-story, a touch of romance, some detection and a chase scene. It’s a lot to live up to.

See also: The Adventure of the Empty House, His Last Bow

10 Responses to Arthur Conan Doyle: The Sign of Four